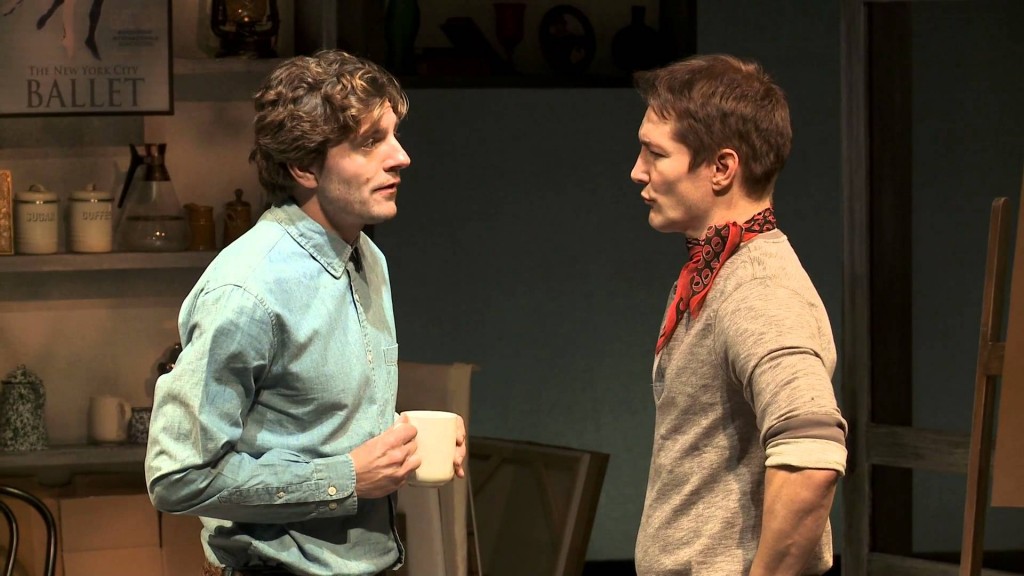 Michael Mastro’s production invigorates David Rush’s play so effectively, you almost don’t notice that each of Rush’s scenes have the same paradigm and general outcome.

Part of the luster comes from hearing artist Jamie Wyeth and danceur noble, Rudolf Nureyev, talk about their individual arts and the training that led each to greatness, Wyeth’s training was loving and painstaking while Nureyev’s was strict, harsh, and mechanical. Part comes from the byplay between two deft and versatile performers—William Connell and Bill Dawes—and the imaginative way Mastro combines the crafts of set designer Alexis Distler and lighting designer Christopher J. Bailey to make some of Wyeth’s studies of Nureyev visible to the Delaware Theatre Company audience. (Eight or so actual paintings of Nureyev by Wyeth are hanging in the third floor gallery of the Wyeth-oriented Brandywine River Museum and worth the visit.)

Rush contrasts artistic temperament with artistic patience, and the method of performing artist with that of a plastic artist, in a series of scenes in which Nureyev comes to sit for portraits Wyeth has been commissioned to paint, Nureyev always becoming peckish, taunting, and difficult while Wyeth delays his painting until he can capture the brilliant dancer in a way that will reflect what an audience sees when he performs. (Several of Wyeth’s works were completed after Nureyev’s death in 1993.)

Both men reveal personal details of their lives but dwell more on the professional than on the personal side. Nureyev, for instance, brushingly refers to his famous defection from the Soviet Union in 1961 but talks a lot about wanting to be the ballet master of the New York City Ballet. Famous names are dropped, like Nureyev’s on-stage partner, Margot Fonteyn, off-stage partner and predecessor as the world’s most lauded dancer, Erik Bruhn, George Balanchine, Lincoln Kirstein, Jerome Robbins, Peter Martins, and of course, Wyeth’s grandfather (N.C. Wyeth) and father (Andrew Wyeth) and  aunts and uncles, primarily Carolyn Wyeth, who taught him to paint.

The conversation remains interesting from several points of view, but it never soars, so Rush’s play engages and mildly enlightens more than it impresses. It doesn’t touch the nuance and texture of John Logan’s Red, featuring Mark Rothko, staged recently at the Walnut Independence Studio. It’s too regular in its habits and takes it for granted that the audience will be content with facts that don’t graduate into feelings or deep insights. Rudi’s impulsiveness and daring is compared to Jamie’s care and reticence, but each shows the way art and artists are made.

The play’s best moments are the instances when Dawes dances as Nureyev. It’s then, more than in any talking, parrying, or bonding, that excitement is found. Distler’s set in a fine representation of an artist’s studio with a moveable’s draftsman’s table, an easel, and loads of the cardboard on which Wyeth painted. (You can see the ribs in the board in one of the paintings at the Brandywine.) Esther Arroyo has fun dressing Rudi in the chic of the day while being smart enough to keep Wyeth in a plain blue work shirt and jeans. Read more on Neals Paper >>
[Delaware Theatre Company, 200 Water Street, Wilmington, DE] March 2-20, 2016; delawaretheatre.org.