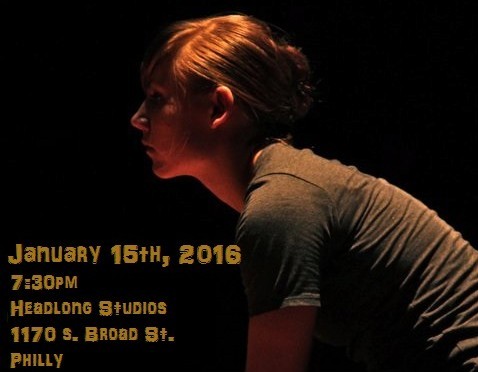 Each Wednesday morning, Caroline O’Brien would come into her work-study at Headhouse Studios to clean the space. Outside she would find one or more people between residences asleep on South Broad Street.

O’Brien’s new work, SOLOnely Together, is inspired by her interactions with the displaced people outside her studios and her appreciation of the many commonalities we share. O’Brien cleans because finances are tight; to keep her involved and inspired with her art, she must find ways to get cheap rehearsal space. Life is a lonely struggle: for an artist, for the homeless, for everyone.

“It’s an amazing feeling to find ways of giving back; by using the elements of what you love most in life,” says O’Brien. She’s partnered with TASK [Trenton Area Soup Kitchen] for the evening’s presentation. Suggested donation is $15 (you can also bring canned food and goods); all of the proceeds will go towards TASK. Restaurant Bourbon & Branch will provide food for a post-show reception.