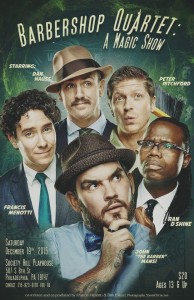 It’s holiday time. Parents are wrapping gifts, hiding them from the kids. I remember those days when I was ten years old. While my mother was still at work, I rummaged through the closet and found my gift, feeling terribly guilty. On Christmas Eve, I unwrapped the gift, pretending to be surprised—but I felt miserable. That night, I promised myself never to open gifts prematurely again. I didn’t want to deprive myself of the magic that life can offer.

I thought of that event when I read the invitation to a surprise evening with one real barber and four famous Philadelphia magicians who are going to surprise the audience on Saturday, December 19 at 8 pm, at the Society Hill Playhouse, a theater that has launched many a career. Who knows, if the evening with the young barber and the veteran illusionists is a success, this group of experienced magicians might go on a national tour, perhaps even offering a free haircut by John ‘The Barber’ Mansi to an adventurous audience member during the show, with the locks reappearing by the end of the evening—hopefully.

John the Barber, a funny, entertaining, and experienced hobbyist magician, “made the cut” as the Master of Ceremonies, the centerpiece of the show, according to his professional magician friends: “We started with him and created the idea of a bored barber loosely around his character—talk about the ultimate type-casting!” You can get a haircut and magic tricks directly from this crafty coiffeur here.

When I read the bios of the quartet of master magicians, I realized that we are dealing with dramatically different people who all share their love for magic, Philadelphia, and interacting with audiences.

The classiest of the multi-award winning magicians is Peter Pitchford, who represents the elegance of Victorian gentlemen magicians who performed at the salons of the well-to-do and in large halls for the burgeoning middle class. It has been said that Mr. Pitchford’s “eclectic repertoire of amazing sleight of hand is guaranteed to make your event a memorable one.” Get in touch with his classy magic here.

Our grandparents might have seen only elegant magicians wearing tails, silk scarves, and gloves, pulling rabbits out of their top hats. However, in 2015, you can see Dan Hauss, who looks likea tattooed hipster trickster who, as they say in Germany, has been washed with all waters—that is, he has done it all: an amazing mensch who runs an online store, selling many magic products and materials. Together with Francis Menotti, he conceptualized and co-wrote this magic show. You can check him out via this link.

Ran’D Shine is the face of the new millennium magician, a bridge builder between people of all backgrounds, widely popular at universities, military bases in the US and overseas, and in hospitals where he performs for children with terminal illnesses. He even got invited to perform at President Obama’s Inauguration Banquet and represented the US at the National Arts Festival in South Africa. To top it all off, he is the first magician who managed to put together a tour that featured a first ever collective of African American magicians from around the nation. For his “different kind of deception,” click here.

Francis Menotti, a master of the ancient craft, is a distant cousin ofthe famous Italian-American magician of music, Gian Carlo Menotti, composer of the beloved opera for young people, Amahl and the Night Visitors. A wise man who follows his passion, Francis doesn’t listen to naysayers and advises young artists to “take every gig” when starting out. You can menotti him here. He even floored Penn & Teller, the famous duo of American magicians who challenge professional artists with their show, Fool Us. Few magicians are so experienced and innovative that they actually manage to baffle the masters on that famous TV show. Menotti did.

I saw that show with Menotti online and was surprised when I discovered that there are hundreds of viewers who watch the recording, dissecting it frame by frame. They then share on the Internet what they perceive to be the secrets of each trick. When they analyzed Menotti’s “Lobster” scenario in minutest detail, exposing the cleverly designed illusions, I felt both intrigued and uncomfortable—the memory of my “childhood Christmas cheating” flooded my brain.

It’s against this background that I promise not to give away a single secret, a single magic trick, but to enjoy an evening of artists who are taking me into a world to which only few of us have access.

Merry Christmas, one and all.

One Reply to “The Magic of Christmas!: Barbershop Quartet with famous Philly magicians at the Society Hill Playhouse”