Orbiter 3 is a three-year project by five playwrights (and a theater administrator) to stage original work by each member. If its only purpose was to produce new work by local writers, it would still be a welcome addition to Philadelphia theater. But on the basis of the company’s first two productions Orbiter 3 is rectifying other shortcomings of local stages.

In the company’s second presentation, Emma Goidel’s A KNEE THAT CAN BEND, a white American, Kate (Anna Zaida Szapiro), comes to Senegal to gather material for her academic sociology thesis on the lives of lesbians in Africa. She hopes her research will change the world, revealing hidden lives and increasing civil rights protections. But when she befriends Aicha (Jennifer Kidwell) and her sister NéNé (Candace C. Moore), she learns they have different priorities.

Goidel was inspired by her own experiences in Senegal, and in some ways A KNEE has the feel of a college composition about a deeply affecting personal relationship that’s perhaps more important and revelatory to its writer than the audience. “You have tons of stories of living in Africa with the secret gays, which is dope,” as Kate’s Dominican friend (Danielle Leneé) puts it.

This intimacy also works in the play’s favor. When Kate’s relationship with Aicha moves beyond the scope of academic protocol into romance, we witness a coming together of two convincingly complex young women. A KNEE THAT CAN BEND is set in Africa and features almost solely lesbian characters. But this is not a didactic screed about the horrible persecution of “undeveloped” countries. Goidel recognizes the complexities of human experience; there are no reductive characterizations here.

That was not quite the case with Orbiter 3’s first production. On the page, James Ijames’s Moon Man Walk reads like a theatrical version of a mundane indie flick, complete with an overly anxious librarian boy returning to his hometown in the company of a manic pixie dream girl. However, onstage Ijames depicts a world where every character is black, without that being the driver of the plot or the definition of a character; in the words of Phindie reviewer Julius Ferraro, he creates “a black world that reminds us … how white our theater is”. 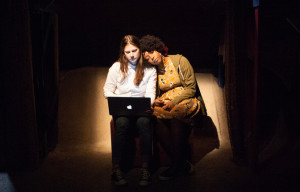 It’s 2015; it shouldn’t be so striking to see a play peopled only by gay characters or black characters that looks beyond their political identity to the human interactions which underlie all lives. It is, and these presentations by an upstart playwrights collective show the importance and relevancy of new theatrical models.

A KNEE THAT CAN BEND is a touching personal play, but it’s easy to imagine it being overlooked by a script reader. It’s set in a foreign country (evoked perhaps too obviously by designer Colin McIlvaine’s primary color scheme, part of a layered set which successfully hints at the layered relationships onstage) and peopled with lesbians and Africans. Themes of politics and privilege run through it (there’s a “difference speaking about a people and speaking from a people”), but they are not foremost in emphasis or neatly resolved.

Instead, director Kittson O’Neill (unfortunately noteworthy note: a female director of a play written by a woman with an all-female cast) focuses on the nuances of relationships. At times, she slows down the action into a cinematic slo-mo, speeding up to the accompaniment of infectious French-language hip hop (sound design by Nick Kourtides). Throughout, she is content to let the relationships pace the action.

The drama is quiet. A KNEE THAT CAN BEND threatens violence (“Senegal is a peaceful country” repeated forebodingly), but whether or not it delivers on that threat is irrelevant. Goidel is comfortable enough to leave loose ends. In Africa as elsewhere, for queers as for everyone, life plays out messily in small tragedies and little loves. A KNEE THAT CAN BEND lives, and the lives it shows are a welcome expansion to theater’s horizons.