The wonderful part of going to any performance labeled “Fringe” is that you don’t know what to expect, not even after you have read promotional materials which describe the event as “a cosmic self-help karaoke opera” and mention compulsive drinking, Egyptology, and cult manifestos. What in the world could this be?

As a child of the sixties who used to go to “happenings” (our version of Fringe) and a devotee of several self-help modalities, when I saw the description of EVERYTHING ONE IN THE DISC OF THE SUN, I knew I had to go. I approached the evening with some trepidation. Would there be loud music, would there be smoke or strobe lights, would I have to sing karaoke, would I be able to tolerate it? Fear mixed with anticipation and a few snowflakes as I headed out into the evening.

Entering into the cavernous darkness of the new FringeArts performance space, we were asked to wait to enter into still another door at the back of the room. Then collectively we were ushered into a smaller area with strings of lights creating a pyramid in the center of the room. Drinks and, of course, retail were available, because what is entertainment these days without commerce.

A young woman (Siobhan T. Gandy) dressed in gold lamé and gold face paint, drinking beer from the bottle, put a red mark on our foreheads. We were now part of the ritual, but our role was to observe and wait for something to happen. Eventually it did. 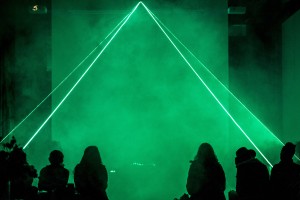 Two men (Tei Blow and Sean McElroy), entered wearing suits, sort of, mimicked our current life of busyness and business, then, taking off their suits in exchange for more gold lame, began to sing. Projected on the screens mounted above us were images of a variety of gurus preaching their brand of self-improvement while the three performers in front of us turned their words into song. An odd form of karaoke.

Some of the teachings I recognized—Abraham, Seth, Heaven’s Gate, Tony Robbins, but what was this really about.  I wanted to be enlightened, I wanted the performance to have meaning, but I couldn’t really find it. Was it a put down of the cults of self-help that have developed around several gurus—some helpful, others on ego trips? Was it a comment on our culture? Probably. Whatever it was, I enjoyed it. The singing was seductive, the sensory stimulus, performance, video projections, music, were a bit too much at times, but never boring. The performances were consistent and intriguing.

The group’s work, according to the program, grew out of a collaborative thesis project, and has that edge of danger that student projects often have. Let’s try something new and challenge you to get it, they say. Sometimes it works, sometimes not. Although to watch performers swill beer from bottles throughout a performance is a bit disconcerting. Again I found myself asking, what’s the point? This is a case where the technique perhaps overshadowed the narrative, but that’s okay. If this is their beginning it will be interesting to see where they go. [FringeArts,140 N. Columbus Boulevard] January 30-31, 2015; fringearts.com.