The issue of diversity in theater (and in theater reviewing) is an ongoing subject of conversation. Kash Goins isn’t just talking about it. His GoKash Productions has produced a series of classic plays with all-black casts. This year’s offering is Arthur Miller’s DEATH OF A SALESMAN. Phindie writer Henrik Eger talked to the play’s director, Ozzie Jones, about the first African American production of this great work in Philadelphia.
—

Henrik Eger: A number of African-American theater companies in the U.S., in spite of their good work, seem to attract a predominantly black audience. By contrast, your production of Death of a Salesman attracted a wide range of people of all ethnic and social backgrounds. How do you explain such success in appealing to a multi-ethnic audience?
Ozzie Jones: I think the reason is largely connected to the audience that both Kash and myself have been developing for our work over the years. I have over the past 20 years worked with a wide range of differing races and classes. Thus there are a wide range of audiences that are interested in seeing the work. The issue of diversity in the arts is ultimately driven by relationships. If an artist makes segregated choices of what communities they will work with and in, then their audiences will be segregated.

HE: You presented an American classic which has been performed around the globe. Who inspired you for this production, and what did you do differently, apart from having an all-black cast?
OJ: The only things I would call “differences” would be stylistic choices. I have approaches to my work that are specific to me. I like making my plays look like films. I use music as a tool to tell the story as if it were another character in the play. And I am interested in stripped-down minimalist staging as in vaudeville. Those all add up to a different look than one would see from someone else. But other than those style choices, I did the play as written—word for word.

HE: Never before have I seen a production of Death of a Salesman where an overweight Willy Loman generated such energy, sweating profusely, and working himself into a stroke and a heart attack all at once. I was convinced that we were watching the last performance ever of this master actor. What did the two of you do to prepare for this role and to give it such self-destructive energy?
OJ: Nothing other than good old-fashioned character development and practice. Kash is an aggressive actor, so he attacks every performance as if it were his last. Frankly, he attacks rehearsals the same way, so the intensity you saw, I believe you would see in any of his performances. 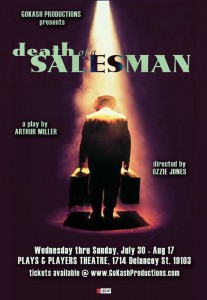 HE: What methods did you use to bring out a certain type of energy to keep up with Willy Loman?
OJ: The method I use is called the Rhythm Form. It is an acting technique I have been developing over the past 10 years. Simply put, I teach the actors to develop their performance in the same way a jazz musician explores a song: focused first and foremost on rhythm and thinking of text as melodic content.

HE: Watching your production, I thought I saw a black play written by a black writer for a black audience, and allowing everyone who cared to come to the theatre to get a slice of reality that shook me deeply. What did you do to simultaneously bring out that joy and suffering in many African-American families in a play that originally took place in New England with an all-white cast?
OJ: I just let the actors tell the truth of the words. I didn’t spend a lot of time talking about race. I think the journey of the artist is to find and tell the truth of the moment. I think the performance felt authentic because the goal of the journey of the actors was authentic. We spoke a lot in rehearsal about telling the truth of the words. I personally believe that race constructions take people further away from the truth and not closer to it.

HE: How do you feel about white actors taking on all-black plays, or companies that reverse roles as in the recent EgoPo production of Uncle Tom’s Cabin, where all the slaves were white and the slave-owners were black?
OJ: I love it. I am, I think, in the minority opinion about this in the black community, but I think the only way theater will bring us closer is if people explore telling the stories of people other than themselves. I further think that white artists have always told black stories in their own voice: Eric Clapton, Al Jolson, Led Zeppelin, Rolling Stones, Elvis, etc.

The only difference is now, in the theater, black artists are doing it with classical white works. Hey, it’s only fair and I love it.

HE: Is there anything else you would like to share?
OJ: Come out to see the last week. The show rocks. Peace.

3 Replies to “Rhythm, race, and energy: Interview with Ozzie Jones on the first African American production of DEATH OF A SALESMAN in Philadelphia”