The famous five-letter-word and its off-beat aficionados 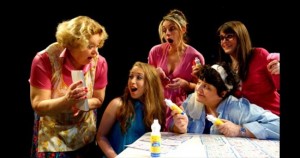 Bingo is a game that has its own fascinating culture with quirky characters for devotees (the stereotype being elderly women who smoke), but translated into a musical comedy, it becomes even more entertaining. ‘Bingo! The Winning Musical’ premiered off-Broadway in 2001, but was staged again this year by the Red Barn Theatre and recently premiered in Long Island through Theatre Three Broadway. A show praised by critics for its “splashy, zippy romp” through the lives of a group of bingo fans, it showcases wacky characters, uproarious adult humor, and the strange rituals of die-hard bingo enthusiasts. The full-length musical written by Michael Heitzman and Ilene Reid, (the Grammy-nominated team known for writing ‘Throw That Girl Around’ from the Broadway musical ‘Swing!’) was honored with the 2007 Bay Area Critics Association Award for Best Musical.

The play starts simply enough, set in the fictitious town of Hamerin County in suburban Pennsylvania where long-time friends and bingo pals Vern, Honey and Patsy brave a frightful storm to attend the annual celebration of bingo’s birthday and its revered founder, Edwin S. Lowe. Vern is the strong and gruff yet good-hearted matriarch of the group, Patsy is the anxious and overly superstitious bingo player, while Honey is the sultry beauty who’s just a bit past her prime. Just as the three are getting their game on, the power is knocked out by the storm, which reminds the friends of one fateful night that began in the same fashion. In a flashback, Vern and Bernice are seen to have a falling out that night, fifteen whole years ago. The story’s resolution comes in the form of Alison, a fresh-faced and optimistic young girl who enters the hall in disguise. She turns out to be Bernice’s willful daughter who is determined to reunite her passive-aggressive mother with estranged best friend Vern. What happens after is a riot, filled with plot twists, more flashbacks, and rounds of bingo that even spectators get sucked into. You can catch BINGO! THE WINNING MUSICAL from April 12-May 24, 2014 in Theatre Three Broadway on Mainstreet, Port Jefferson, NY.