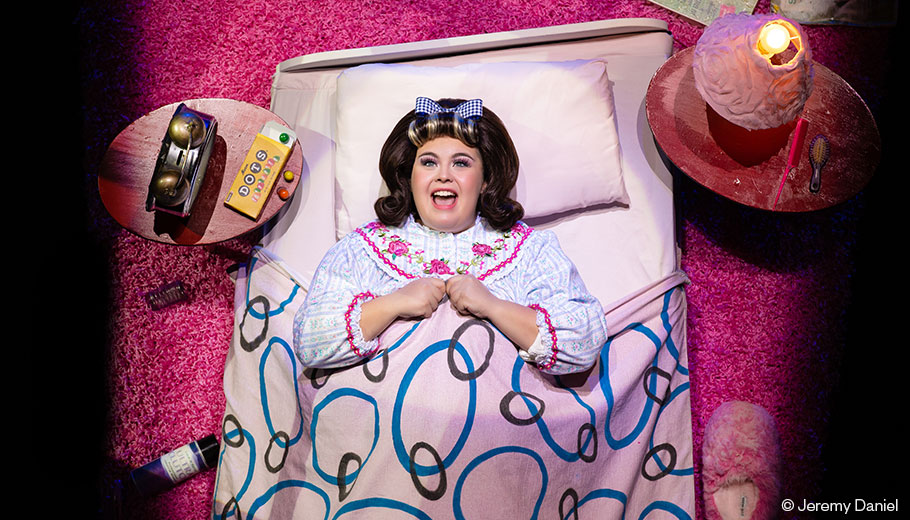 There was something sort of unhinged about the whole affair. Fellow homosexuals in bright patterns and short shorts cavorting. Teens looking eagerly to their drama teachers and high school peers. Gal pals from the burbs in for a night on the town. The crowd seemed rowdier than usual. The subtropical theater temperature provided scant relief from the warm May night. After a 35-minute curtain delay, the audience was restless.

Thus, as part of an annoyed, hot, and masked audience, I was delighted to find that the charms of Hairspray are still hard to resist. Though 20 years old, this production feels as fresh as ever. Based on the 1988 John Waters’s film of the same name, Hairspray tackles body positivity, racial inequity, and youthful rebellion with verve. Long before RuPaul was a household name, the maternal Edna Turnblad was portrayed on film by Divine. For a show written during W’s first term the racial politics feel serious and considered. The music (written by Marc Shaiman and Scott Wittman) is as good as it was when I played the Original Broadway Recording on my brand new iPod and the choreography (by the legendary Jerry Mitchell) feels like a jolt of electricity.

As the unflappable Tracy Turnblad, Niki Metcalf bubbles with youthful enthusiasm. As her mother, Drag Race Alum Andrew Levitt (Nina West) is overly sweet and congenial. Divine brought a delicious acridness to all of her characters that is simply missing in this production. I have always found the character of Link Larkin (Will Savarese) to be a bit of a teenage-heartthrob bore. Not so, in the hands of Savarese, who manages to capture a youthful spirit that makes the character’s moral transformation all the more heartening. Understudy and Dance Captain, Michael Corey Hassel, brought the house down as Seaweed. The rest of the supporting players are fine to pretty good depending on your threshold for stylistic hamminess. The ensemble, though, dances their hearts out.

[Miller Theater on the Kimmel Center Campus as part of a national tour] May 17-May 22, 2022; kimmelculturalcampus.org; hairspraytour.com