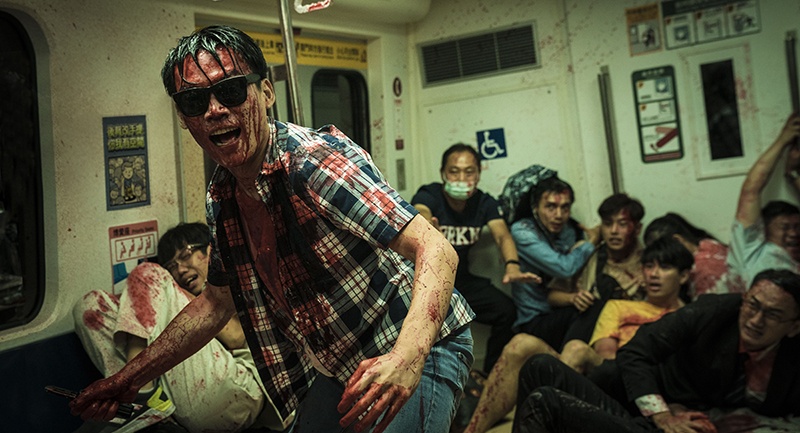 I can count on my fingers and toes ten times over the instances when a movie claimed to be truly extreme — to push the limits of good taste further than they’ve ever been pushed — only to deliver something that could charitably be described as “pretty violent, I guess.” So even though the programmer dropped a trigger warning in his introduction to The Sadness, I didn’t expect to have my stomach turned in any notable way.

But lemme tell ya, the trigger warning was valid. The Sadness is a hardcore splatterpunk feast of the highest order, with more than a few images that will have you thinking “well shit, now I’ve seen everything.” Buckets of blood, vomit, tears, and well, pretty much every other potentially gross fluid rockets out of every orifice you can think of, while sharp objects are employed to make new orifices in places they don’t belong. It’s absolutely revolting in every way and it rules.

The plot begins with your basic “zombie infection” premise. Boy drops girl off at work and then arrives home to find that the world as we know it has changed. A malady has spread which causes a complete inhibition in the areas of the brain concerned with violence and sex. As such, the infected can’t help but to give in to some seriously deranged impulses. Boy now has to locate and rescue girl, who is currently leading a rescue effort of her own.

What makes this different is the mechanism of the infection itself. The strange sickness doesn’t turn sufferers into mindless, catatonic chaos agents. Instead, those afflicted can speak just fine, and will act not with abandon, but with pointed vengeance/lust/anger. They will certainly destroy anything that gets in the way of their violent hedonism, but they will also target specific people. This alteration to a classic outbreak narrative makes the disease a more pointed evil, allowing the script to make larger than life villains out of those who would classically be depicted as non-characters. As a result, The Sadness is one of few splatter-centered movies to be legitimately scary.

Undoubtedly the bloodiest movie I’ve seen since The Night Comes For Us, with about the darkest, blackest sense of humor imaginable, The Sadness is perfect midnight fare that will please any gorehound who can get their degenerate paws on it. It’s wildly disturbing at all times, and it’s just so much fun.