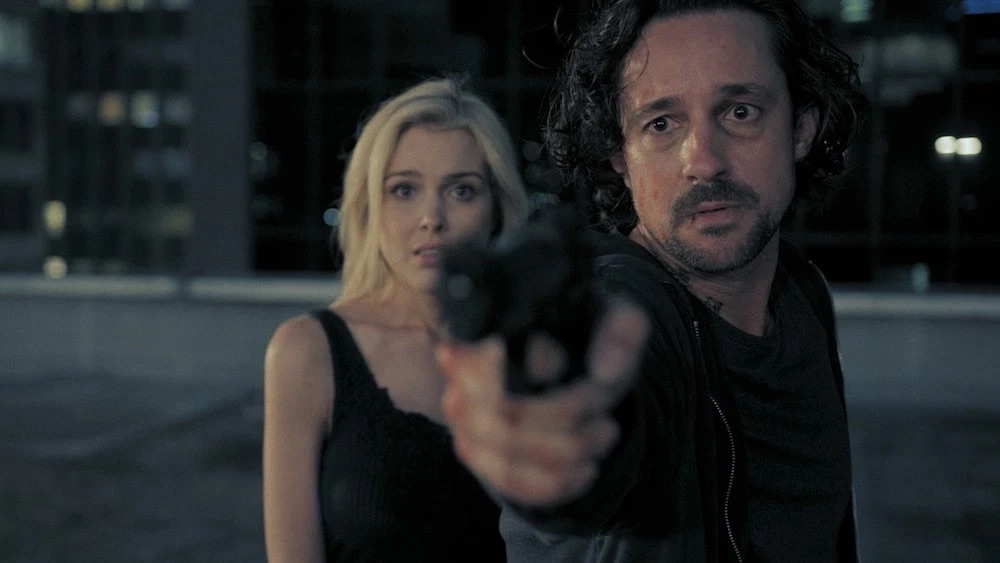 In the midst of Adverse, a relatively low budget revenge thriller, we find an understated, soulful performance from Mickey Rourke. To some degree he represents the movie’s big bad, but beyond his gruff exterior we find a fully realized, complicated character. This is par for the course for this intense piece of genre flair from writer/director Brian A. Metcalf, which is populated with a collection of complex performances from a surprising roster of players. It’s a simple tale of revenge, set amidst the seedy underbelly of Los Angeles, but it’s not the plot that resonates once the credits roll — it’s the characters.

Thomas Ian Nicholas leads the pack as Ethan, a troubled young man working to stay on the straight and narrow. He drives for a rideshare service at night in order to pay the bills, and regularly checks in with his empathetic parole officer (Lou Diamond Phillips). Ethan is the sole caretaker for his teenage sister Mia (Kelly Arjen), and if there’s an area of tension between them, it’s in his desire to prevent her from following in his footsteps. Unfortunately, it seems she’s doomed to make her own mistakes — partying hard, using drugs, and hanging with the wrong crowd (at the legendary Viper Room, no less). When it comes to Ethan’s attention that Mia and her boyfriend owe the wrong people a lot of money, he pulls some strings to make it right. But when his efforts are nullified by the dishonesty of the underworld, leading to unimaginable tragedy, Ethan now has a new mission: vengeance.

Audiences will recognize Thomas Ian Nicholas from his string of family-friendly comedies from the ‘90s. Rookie of the Year is perhaps the most notable of the bunch (I wore out that VHS as a kid, predictably the 20 seconds of tape when the doctor says “funky buttloving”), but among all of them, the actor has always played a clean-cut sort. In Adverse, we get to see him take on a very different type of character. Ethan isn’t a skinny, smiley kid, but rather a muscular, brooding man with a wicked scowl and a tattoo peeking out from the neck of his sweat-stained t-shirt. He’s world-weary, and he wears every unfortunate past experience on his face. This is a casting choice that I never would have predicted being successful, but now having seen the film, I can’t picture Ethan being played by anyone else.

Also from the pages of Tiger Beat is Andrew Keegan, an actor who has always played a hunk, here playing a gacked-out hitman of sorts. He’s part of a duo whose other half is played by Luke Edwards, star of Little Big League — the Volcano to the Dante’s Peak that is Rookie of the Year. Sean Astin, the eternal nice guy, shows up as Ethan’s dickhead boss. And with the aforementioned Lou Diamond Phillips playing a caring parole officer instead of his typical hard-edged roles, pretty much everyone is playing against type. It’s wild to see, and it’s a series of casting gambles that really pay off.

Adverse is a dark, moody film, albeit never a dreary one, that effectively captures the gloomy look of Los Angeles at night. The film rarely places us in the city proper, but the iconic skyline always looks down from the periphery, creating a dichotomy between the glamour of the City of Angels and the setting of Adverse, where angels are few and far between. As Ethan moves forward on his mission for vengeance, the underworld powers that be see his anger as an opportunity to bring him into their ranks, using the cyclical nature of tragedy and violence to recreate their own image in a younger package. Ethan, rarely one to emote expressively, is a character whose surface motivations are clear as day, but whose deeper drive is a bit of a cipher. This is by design. We in the audience do indeed want him to get his justice, but we also want him to consider the costs. If he succeeds, surely the hole he leaves in the hierarchy of the crime world will be filled rather quickly. If he fails, some truly terrible people will continue to operate. In addition, it’s immediately clear that Ethan is very good at being bad — you could even say he has a natural talent for it — and we must wonder if this is something he recognizes as well.

Plot-wise, there is very little excess here, putting forth a rather straightforward revenge story and filling it with characters. It’s clean and the pace moves accordingly. There are some production issues that sting a bit, and all can be attributed to the film’s small budget. The score, while very atmospheric and fitting to the imagery, tends to rumble at points, often overshadowing the dialogue which is itself sometimes the victim of very noticeable ADR. The action is cleanly shot (there’s one long-take sequence that totally rocks), but is marred by unconvincing blood effects. Metcalf smartly does not let the camera linger too long on the gore for it to be a dealbreaker, but it’s a personal bugaboo of mine that I have a hard time not seeing. Where he does let the camera linger is on the scenery. Los Angeles is beautifully shot here, evoking vibes from Michael Mann’s more recent digital era of filmmaking (both Collateral and Blackhat have a similar visual profile).

As I said, however, any issues I had are not a failure of choice or vision, but just a limitation of budget, and as such, can be easily dismissed, especially since what really matters is the thematic meat of it all, which is something no budget can buy. Adverse is the type of exciting filmmaking that, if the movie gods are good, will lead to the team behind it getting a chance to play in a bigger sandbox with even shinier toys.