In order to be a success, it stands to reason that Godzilla vs. Kong really only had one thing to deliver: the titular battle between the two most iconic kaiju in film history. The respective Freddy and Jason of their own subgenre of sci-fi, these two big baddies have had a battle brewing for decades. And although they’ve thrown fists (claws? paws?) in the past, they’ve never done so with a big budget at their backs. Today, with modern technology, this clash of the titans is absolutely wonderful to behold.

If we remember back to each of the character’s origins, they were conceived with some hefty thematic weight. Godzilla was originally a cautionary tale about nuclear power, laced with the collective grief of a country reeling from the effects of the nuclear destruction of Hiroshima and Nagasaki. King Kong began as a commentary on American ego and imperialism which, with the passage of time, has also taken life as an exploration of the “other” living in a culture not designed around their existence. Pretty heavy stuff, and it’s stuff we’ve moved on from pretty much entirely within the series in the name of spectacle and fun. Although this is not necessarily the best choice when it comes to story, it’s a much better one than the lazy invocation of clammy, turgid eco-concerns that was horribly mismanaged in the previous MonsterVerse film, Godzilla: King of the Monsters. We’ve also moved on from the human toll that the first Godzilla film in this cycle mostly nailed at depicting. Since this is in the same series, it’s understandable to watch Hong Kong being stomped to the ground and wonder how many thousands of people are dying horribly, but since no entry in this series feels particularly connected to any other, except through same-named characters that don’t announce their identity/lineage, it’s also easy to just sit back and enjoy the monster carnage. And while that first Godzilla film remains my favorite of this modern cycle, I do wonder how long that dark tone would have held up.

Tonally, I’d say this entry is closest to Kong: Skull Island, in that it’s really mostly about fun, which is quite the relief since the excessively serious nature of Godzilla: King of the Monsters clashed with the notion of multiple giant monsters trampling the world, and only served to highlight how dumb all of this is if you think too deeply about it. So it’s best to put intense thought on hold and just let it rip. And once Godzilla vs. Kong rips, it rips HARD.

The plot is simultaneously convoluted and simple, resting on the shoulders of a bunch of brilliant-yet-idiotic humans who only exist to fill the gaps between the battles. It sounds like I’m talking shit, but they fill these gaps quite nicely. 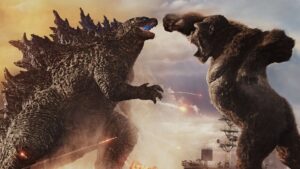 We have Nathan Lind (Alexander Skarsgård), a disgraced hollow earth scientist(?) whose brother died in a trip to the center of the earth. He’s approached by eccentric billionaire(?) Walter Simmons (Demián Bichir) to lead a mission to the center of the earth to retrieve a power source that he believes can power a mysterious project that could help protect humanity from the titans. Together with scientist(?) Ilene Andrews (Rebecca Hall), who has been keeping King Kong in a virtual reality bio-domed version of Skull Island for study, and a young Skull Island native (Kaylee Hottle) whose family died in an offscreen storm, they enlist the giant ape against his will to guide them toward said power source. Titans like Kong are naturally attracted to it or something.

Elsewhere we find Madison Russell (Millie Bobby Brown) teaming up with her friend Josh Valentine (Julian Dennison) and conspiracy theorist podcaster Bernie Hayes (Brian Tyree Henry) to investigate why Godzilla, previously believed to be on humanity’s side, is suddenly attacking our cities once again.

Catch all that? Don’t worry, it doesn’t matter, and within the context of the film it works just fine. The actors are all committed to the weirdness, and none take it so seriously that it becomes necessary to question their logic. Also, Dennison and Henry make a surprisingly funny little comedic duo, which I never could have called, despite both performers having great comedic chops on their own (lest we forget that Henry originated the role of General Butt-Fucking Naked in The Book of Mormon).

Where Godzilla vs. Kong excels is in the action department. Contrary to the prior entry, and to off-brand kaiju flick, Pacific Rim, the dark of night and inclement weather aren’t employed to mask the special effects. The battles here happen mostly in the full light of day and free of rain. The showstopper, while indeed set at night, is completely visible, as it takes place amidst the neon-lit skyline of Hong Kong. It’s absolutely fantastic. Director Adam Wingard (You’re Next – the best slasher/home invasion thriller of recent years) is not content to let the effects do all of the work. Amidst these mind-blowing action sequences, he throws down some inspired direction, alternating between large, geography-establishing shots of battle and tighter moments of dizzying kinetic camerawork that allows us to feel every blow dished out or received by the titular beasties. And even when the camera goes wide, it’s rarely static. One shot, taken from inside the cockpit of a fighter jet as it takes off from an aircraft carrier exists primarily to exhibit the gigantic fisticuffs occurring on said aircraft carrier. It’s exciting as hell, and never disorienting. Little moments of flair like this keep the action alive, preventing it from dissolving into punishing repetitiveness.

Add to that a handful of clever needle-drops and the most expressive facial structures of Kong and Godzilla I’ve ever seen, and you get another level of uncommon engagement with such things. Both creatures show a surprising range of emotions mid-battle, evoking the most empathetic Kong since Peter Jackson’s classy stab at the material, and the most relatable Godzilla maybe ever (relatively speaking, of course — he’s a fucking lizard).

The magic of both Godzilla and Kong over the years is their uncanny abilities to reinvent their respective franchises on the regular. Sometimes the movies are good, sometimes bad; sometimes deep, others remarkably shallow. So odd that such a simple thing (monster smashes buildings) can be mined for so much. The current era of Kongzilla, just like those which came before it, is a mostly good mixed bag, but a bag with all the right intentions. Godzilla vs. Kong, of all the newer entries, is easily the most fun and rewatchable. As the world gets vaccinated and life slowly returns to normal, this is the film to see on the biggest screen possible if you can do so safely. And if you can’t, it’ll still kick your ass if you watch it at home.

Released simultaneously in theaters and on HBOmax March 31, 2021.