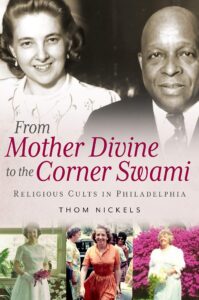 Religious cults have marked every society throughout history, and Philadelphia has seen its share of peculiar groups. The city’s streets have seen such charismatic figures as Father Divine of the Peace Mission Movement, Anton Szandor LaVey of the Church of the Process, and Madame Blavatsky’s 19th-century Theosophical Society. In a new book, culture writer and sometime Phindie contributor Thom Nickels considers the history of religious cults in Philadelphia. We talked to Thom about From Mother Divine to the Corner Swami, now available from America Through Time publishers.

Phindie: What inspired you to write this book?

Thom Nickels: I was partially inspired by the thought: If all religions are true, then there’s no true religion at all: Belief is just a sliding scale of subjectivity. As a young boy growing up Roman Catholic and going to Mass, I often wondered what if I had been born Protestant, Hindu, or Muslim. Would I have been just as convinced of the truth of my birthright faith as I was as a Catholic? I began to study the roots of various religions. I became a fervent agnostic at 19 but had a breakthrough experience at 23 which caused me to reconnect with my Catholic roots (though I later became Russian Orthodox).

What’s always fascinated me is how people fill the spiritual gap in their lives after turning away from organized religion, since work and career can only do so much.

Phindie: How do you define a cult? What do you see as the line between religion and religious cult?

Thom Nickels: In some circles of academia, the word ‘cult’ is never used. Instead, we hear terms like “new religious movement,” a cumbersome phrase that—thank God—has never taken off. I’d define a cult as an organization of followers that disband or die out when their leader dies, whereas in an established church, etc., a new leader—pope, bishop, rabbi—is elected or appointed. Cults harbor absolute authoritarianism, so forget about critical inquiry. A cult encourages unreasonable fears about the outside world. Financial records are also never revealed, and followers who leave are considered evil or in some instances tracked down and harassed, as was the case in Scientology until recently. The leader in a cult has ultimate “personal” authority which goes far beyond the abstract institutional power of a bishop in a church. Jim Jones of Jonestown infamy, for instance, would go up to his many male and female followers and tell them that they were being called to offer their bodies to him in a physical union. And everybody obeyed, even the most heterosexual of men.

Phindie: Do you think there’s something about Philadelphia that attracts cults?

Thom Nickels: William Penn’s emphasis on religious freedom made for a wide playing field in Philadelphia. Madame Blavatsky, called “the great Russian bear,” smoked 200 cigarettes a day and lived in a brownstone at 3420 Sansom Street (now the White Dog Café). In 1874, there were some 300 mediums in the city. Many belonged to different branches of Theosophy and most advocated strict vegetarianism.

Looking back to the 1970s and 80s, Philadelphia had a large New Age movement with magazines like New Frontier, Garland of Letters Bookstore, crystals, Reiki, meditation, yoga, and finding a guru who spoke your truth. There was the Church of the Process in the 1970s whose members wore long capes and handed out satanic info-leaflets in Suburban Station. I remember a tiny spiritualist church on South Broad Street. At 12th and Locust there was Polly’s Spinning Wheel Restaurant that served mediocre food but with each meal you got a session with a psychic reader. The place was packed with Center City office workers and CEOs.

In the 1980s and 1990s Philadelphia was also sprawling with quasi cults like EST and Lifespring, so-called consciousness-raising movements. EST and Lifespring “missionaries” would go into bars and clubs and make dates with people but instead of going out to dinner, you went to an introductory course where you were encouraged to sign up and open your wallet.

Phindie: Was there something that surprised you when researching it?

Thom Nickels: I was able to explore the life of Swami Virato, publisher of Philadelphia’s New Frontier magazine in the 1980s and early 1990s. Virato was initiated as a guru by the famous Osho Bhagwan Shree Rajmeesh. Virato was all about tantric sex, love, celebration, and humor. “Tantra doesn’t tell you to control your sexual urges to reach God,” Virato said, “but rather the opposite…”  Virato lived on South Street but left Philadelphia because he felt it was becoming overcrowded. Virato hated crack smokers and he made a controversial statement in the 1980s that “AIDS was a good method of population control.”

Phindie: Can you share an interesting anecdote or tidbit you found in your research?

Thom Nickels: My research into the life of Father and Mother Divine of the Peace Mission Movement led me to interview the adopted son of Father Divine, Tommy Garcia, of Las Vegas, Nevada. It was Garcia who told me that Father Divine took him aside one day and told him that he was not really God but to “let the people believe what they wanted to believe.”

Phindie: Was there something you saw or thought about recently that made now a good time to write it?

Thom Nickels: As the times become increasingly secular, the national obsession with politics keeps growing. Politics for many people has become a kind of orthodox religion—with cultish overtones. But, really, a cult can be anything now; it can even be a manner of dress and “feeling,” such as living in Powelton Village or Mt. Airy. Avid pitbull lovers can even have a cultish adherence to the breed. Everything, it seems, is about branding now.

Purchase the book from America Through Time and other online stores.