One could take a look at the marketing for Greenland and be forgiven for assuming that it’s a movie about Gerard Butler singlehandedly putting an end to the apocalypse with a combination of yelling, science, yelling about science, and punches. And while that may be a really awesome-sounding movie (I’d certainly go see it), it’s not at all what Greenland is about. Yes, it involves the apocalypse, brought on by a gigantic comet that is breaking up into pieces over the earth, but it’s not a story about saving the world — it’s the story of one man trying to save his family, and doing so with minimal punches.

The gist is this: John Garrity (Gerard Butler) is a structural engineer who is currently trying to regain his family’s trust after a split between he and his wife, Allison (Morena Baccarin). Today is supposed to be their first real attempt at acting like a family since the split. The couple and their young son (Roger Dale Floyd) are having some people over for a party, and all three are doing their best to play it cool. Unfortunately for them, today is the first day of the apocalypse. Fortunately for them, John’s career has his family designated “essential” by the government, and therefore entitled to a one-way ticket to an underground bunker in an undisclosed area that scientists have deemed most likely to survive the pending extinction event (I’ll give you three guesses as to where it is). This makes for a rather awkward departure for the Garritys, as they essentially have to kick their friends out of the house so they can die while the Garrity clan hits the road.

But Greenland does not shy away from such awkwardness to focus on action set-pieces. In fact, much the opposite. The proper weight is given to this opening conflict, showing how the Garritys must reckon with both the logistics and morals of getting to safety while leaving “non-essential” people behind. It’s a surprisingly thorough exploration of some potentially murky territory. For example, a lot of us remember the disaster flick 2012, in which an extinction event had John Cusack and his family on the run. While that movie was a lot of fun in a blockbuster sense, the character work was rather silly. Why am I supposed to care about the survival of John Cusack when, in the reality of the film, me and everyone I’ve ever met are now dead? Greenland runs the risk of manifesting a similar feeling of cold logic, and although it’s not entirely absent (in the reality of this film as well, we are all most likely quite dead), keeping the focus on family and not on crumbling monuments prevents these thoughts from derailing the film. 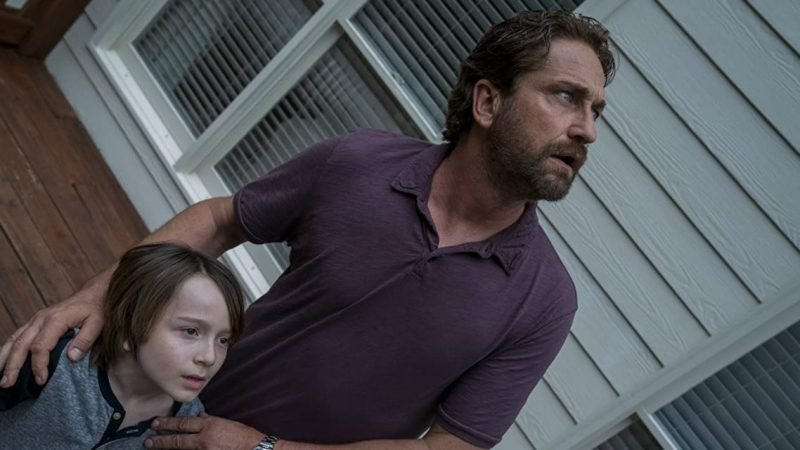 What follows is essentially a road movie filled with smaller action sequences, intense character interactions, and a reasonable amount of larger bangs and booms. The Garritys run into many different challenges, both chaotic and bureaucratic. They are separated, placed in scary situations, and forced through the wringer at every turn. The tension remains high throughout. Yeah, it’s ultimately a bit silly, but the film’s commitment to not being 2012 Chapter Two: 2020 almost magically keeps even the most cynical viewer engaged with it. Any time that creeping notion of “these people are pretty privileged in the first place to have been selected to survive the apocalypse” occurs, someone onscreen will remind them of this in no uncertain terms. It’s a silly script, but it’s most definitely not stupid. Respect.

As a family unit, Butler, Baccarin, and Floyd have wonderful chemistry. They feel like real people (another rarity in this genre), and their interactions are tinged with emotions that are congruent with what we learn about the history of their family as the film progresses. Gerard Butler is generally considered a good actor, but he’s also the focus of a lot of memes. The dude has a wild look about him and has some baffling role choices in his filmography, but it’s nice to be reminded that when it comes time to create a character, he’s quite good at his job, differentiations between spoken vowels and consonants be damned! His John Garrity is a flawed but generally good man whose journey to save his family is racked with the guilt he holds over being “chosen,” and Butler wears this in every moment. When he’s forced to resort to an act of pretty extreme violence, it hurts to see. Baccarin, who has evaded superstar status despite being one of the most prolific performers of recent memory (she’s in almost everything), also does fine work here. Her worry for her son is our worry. Her relationship with her father (Scott Glenn!) is relatable and thorough, even though they only share a scene or two.

The point here is that in a movie that features no shortage of well-rendered CGI fireballs falling from the sky and causing massive, cinematically pleasing damage, it’s the character moments that stick out most. It’s the concern I felt for the Garrity family that I look back on fondly. It’s the fact that there’s a subplot involving the logistics of having a diabetic loved one that is handled with realism, grace, and not just as an added ticking clock. Or the fact that while the film dances with the cynicism inherent to frightened humans trying not to die, it maintains a strong through-line of hope that persists after the movie ends.

In a lot of ways, you know what you’re getting into with Greenland, but in a lot of other ways, you don’t. For a film to deliver on all the goods expected of a disaster flick while also telling a story that isn’t just empty connective material to link pre-visualized action sequences is impressive. It’s the disaster scenes, rather, that serve to connect the human drama, and it’s this drama that makes Greenland worth checking out before the world ends.

GREENLAND is now available on Blu-ray™, DVD and On-Demand from STXfilms and Universal Pictures Home Entertainment.