In Philadelphia Theatre Company’s production of THE WOLVES, streaming now through December 20, Hanna Gaffney plays a confident striker for an elite indoor soccer team. Her character is the focal point on the field, and the center of much of the action in Sarah DeLappe’s wonderfully naturalistic portrayal of nine high school girls. We talked to Hanna about her role in this remarkable contemporary play and its striking virtual production.

Phindie: What attracted you to this play?

Hanna Gaffney: First off, I’m not sure about you but I can’t remember the last time I’ve seen a play with all female-identifying characters. That in itself is exciting. The auditions were exciting for that reason. There’s something about the hyper-naturalism in DeLappe’s writing that was completely intriguing, especially when you’re able to hear it out loud. And maybe I’m a glutton for punishment, but I found it wonderful and horrifying to be transported so easily back to high school with her fantastic writing.

Phindie: Did you play soccer or team sports in high school?

Hanna Gaffney: Noooooooooo. I was an “Emma P” in the script: I opted for the school play, muttering my lines under my breath in science class. The closest I got to sports was participating in Tae Kwon Do growing up. I loved fighting people in a safe environment, and I was good at it. I loved breaking boards under my fists or feet, I loved winning and I loved getting hurt and getting angry about it. I think all of that would translate to moving on a field.

Phindie: What drew you to your character?

Hanna Gaffney: I love #7. In the script she’s described as “Striker. Too cool for school. Sarcastic, “fuck,” thick eyeliner. Almost seventeen.” I was NOT #7 in high school but I found a similar power the older I got. We differ, in that I use my power for good (though my older sister might tell you otherwise). But #7 can make people listen. Through confidence, an aura, experience, bullying, whatever tactics she needs she’s not afraid to draw on them. I try to make people listen to stories.

Phindie: What did you like about working with director Nell Bang-Jensen?

Hanna Gaffney: Nell is brilliant. She’s a director who truly truly does her homework and knows the play inside and out. A director who can do that creates trust within a company. I trust she has my back because she’s done the research! But she also creates a space where you can feel free to ask questions or offer suggestions. Several times I came back to her the next day and said “I thought about it last night and what do you think about taking this line this way instead of that way?” The answer was always “yeah! let’s try it.” She also finds really interesting questions to get you to consider a note or an important moment. She is kind and thoughtful when discussing delicate or triggering subject matter and just an all-around great human.

Phindie: What themes or ideas did you talk about in rehearsal?

Hanna Gaffney: We discussed a lot in rehearsal: Eating disorders, rape, friendships, boyfriends, acne, religion, privilege, therapy, the list goes on and on because each character has a distinct story. We talked a lot about pacing. I think we’re all trying to figure out how that works without an audience. Usually you feel the breath of the audience and when they don’t feel like laughing or crying with you, you can adjust. You ‘take out the air’ and tell the story as honestly as possible. So without anyone to react to jokes or create a pause, we kept up the pace of the dialogue. There are moments in this play that are dark and the tendency is to wallow and become lethargic in your pacing. Nell was great at reminding us that we’re 16, and the script isn’t asking us to slow down. 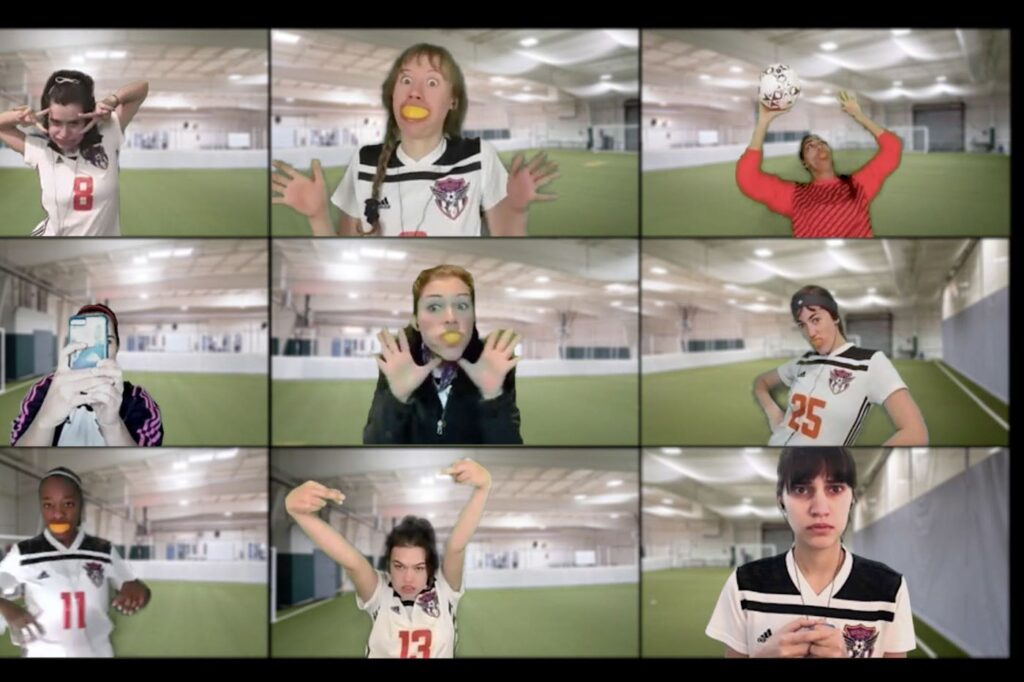 Phindie: DeLappe leaves much left unsaid or addressed obliquely. What did you learn about the character and the play as you worked on it that wasn’t obvious on first reading?

Hanna Gaffney: I missed so much in my first reading of this play. DeLappe packs so much in there! I’m not sure I clocked that #7’s parents were divorced, I’m not sure I understood her full bullying power. I so wish I could be onstage with #25 to truly butt heads with teenage intensity.

I didn’t grasp how devastating a horrible injury would be for one of those girls.

I didn’t pick up on a character’s eating disorder, that another character is molested (“stuck his hand down my shirt”).

I didn’t understand how daunting it was for #7 to watch the new striker juggle so brilliantly as power starts to shift.

I didn’t take the time to understand how cruel and selfish and near evil my character’s actions were.

I did not realize in my first read how horrifying it is that soccer mom jogs over to unload on all these children.

Phindie: What opportunities did the virtual production provide as an actor?

Hanna Gaffney: I’m much better at tech support! We all had wires running all over the place. At least once every rehearsal someone’s entire setup would tumble off their amazon boxes and their video would go dead. It’s a process!

In some ways, it’s wonderful to be so close to everyone’s faces, for the audience’s sake too. The expressions are something you get to see if you’re in the first few rows or if you’re onstage, but the back of the house has to understand the story through body and voice. So that’s a treat! You have to bounce around a bit, Brady Bunch style but if you can get your ear to tune in to the cacophony there are some seriously funny and tender and heartbreaking things happening right up in the camera. I think we all benefited as stage actors diving into ‘screen acting’. It’s a bit more subtle, since your audience is right there, just that little webcam. Testing the waters on teenage explosiveness in a tight space was a challenge but there were some seriously amazing actors to virtually work with. This show was so well cast.

Phindie: It certainly was! Thank you and thanks to the whole cast!

THE WOLVES streams at philadelphiatheatrecompany.org/the-wolves November 27-December 20, 2020. Tickets are pay-what-you-can and you really should see it.