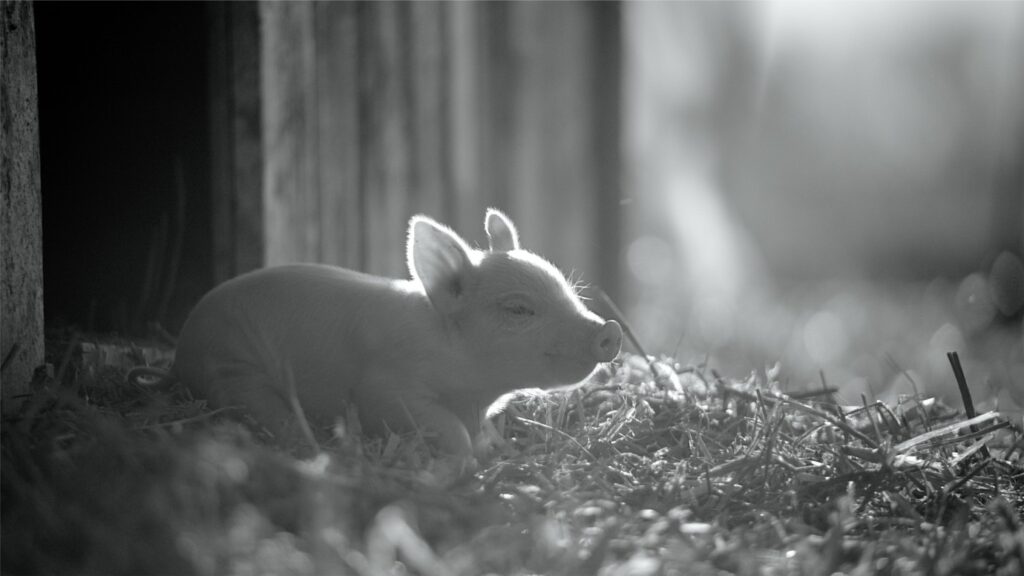 Shot entirely in black and white, without a single lick of dialogue, swell of music, or human interaction of any kind, Gunda follows the life of a handful of farm animals as they go about their day-to-day life on the farm. Piggies, moo cows, and even a one-legged chicken (shot in a way that makes it very clear that birds descended from dinosaurs) wander the farm, feed, defecate, and explore, and watching them do so is absolutely hypnotic.

Before this film screened, I had made a pot of sausages in sauce, and was terrified that I’d be noshing on some pig right as the film took a turn into anti-factory farm territory. Luckily for my appetite, this did not occur. While the specter of death hangs over the film, it’s not the focus, and is there only as an afterthought. It’s not at all obtrusive.

It’s a very frank film, featuring one early segment of natural selection that could be considered upsetting, but it’s not pointed in any way. Not an ounce of it occurs on a factory farm, but respect is paid to the idea that these animals are, to a degree, servants to humanity. Gunda is just a reminder that they have lives too.

It must have been next to impossible to capture the footage that makes the entirety of the film, and as a result, a few of the camera motions repeat themselves to the point of emotional distance, but this is a fleeting concern. Comes with the territory, I’m sure. At any rate, this is pure cinema, and it’s a journey  that any film lover would do well to take. Who knew seeing an adolescent pig pee for a very, very long time could be such high art, and in a family friendly film, no less, but here we are.