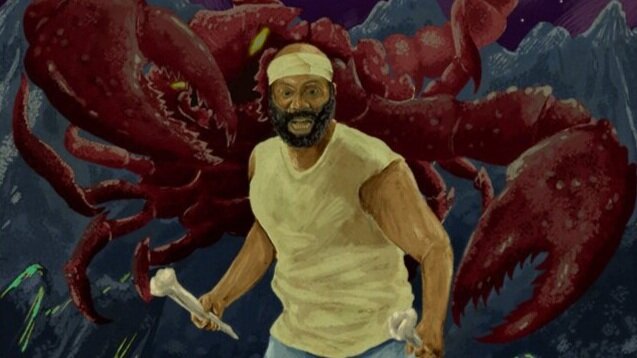 A local madman made this loving ode to his daughter that takes the form of a stop-motion-live-action-animated-head-trip movie about, you guessed it, Papi Ramirez fighting some giant scorpions. Per the “making of” segment attached to the film, Rivera built a mini studio inside of a storage unit here in Philadelphia and made the entire film all by himself. So yeah, it’s a little shaggy, and very very silly, but the feat of filmmaking that brought forth this delightful little distraction is downright heroic.

Rivera himself plays Papi, a stuntman who is expecting a child with his loving wife. Elsewhere, a duo of giant scorpions are begging their exhausted mother for food. After a grueling shoot day, Papi crosses paths with said scorpions, who desire to turn Papi into dinner. What follows is a colorful explosion of absolute insanity that isn’t content just to be an empty sensory experience. Instead, Leslie imbues the story with themes of parenthood, identity, and unbreakable familial bonds. Both Papi and the Mommy scorpion want to do right by their children, and both have the skills to take the other down, but only one can emerge victorious!

The scorpions are created using very basic stop motion, and a green screen is employed to merge their world with Papi’s. Action sequences that would be gigantic set pieces in a more expensive movie are created here with miniatures and clever editing. Impossibly, the action is downright exciting, while also being goofy enough to really tickle the senses. And while you’d of course recognize the DIY nature of the project, you’d never know this was the work of just one guy from looking at it. It’s true when they say that nowadays, anyone can make a movie. Papi Ramirez vs. Giant Scorpions proves that if you’re creative enough, you can make a pretty damn good one.