For a long time I’ve been watching the work of Carrie Coon and wondering when she, an equal talent with an actress like, say, Cate Blanchett, would have her very own heavily-costumed, high drama role through which to exhibit her brand of character devotion. Someone as chameleonic, committed, and naturally talented as Coon would certainly do well in any role thrown at her, but after playing second fiddle to Rosamund Pike in Gone Girl, and delivering her own brand of alt-Frances McDormand in the third season of Fargo, it was time for her give a wholly unique, BIG performance. Rumblings of her work in The Nest fell on curious ears. Would this finally be her chance to chew some scenery as a leading lady? Would this finally be her chance to give the show-stopping performance we’ve all been waiting to see?

Yes, yes it would. While not the high-costume drama we could expect from a Cate Blanchett, The Nest is definitely a more contemporary version of such a thing. Short of a voluptuous fur coat, which Coon’s Allison gifts to a young woman much more interested in material possessions than she, this is what a costume drama would look like in the real world, and not the heightened lens of a filmmaker looking to make our eyes pop. In fact, this visual restraint is very on-brand for a film with Coon at the center, as her appeal is typically that of the every(wo)man. Instead of playing a bejeweled woman well-entrenched in high society, she plays a middle-class woman, thrust into high society by a husband for which image is his only concern. Alas, in shouting my love for Carrie Coon from the mountaintops, I have gotten ahead of myself. 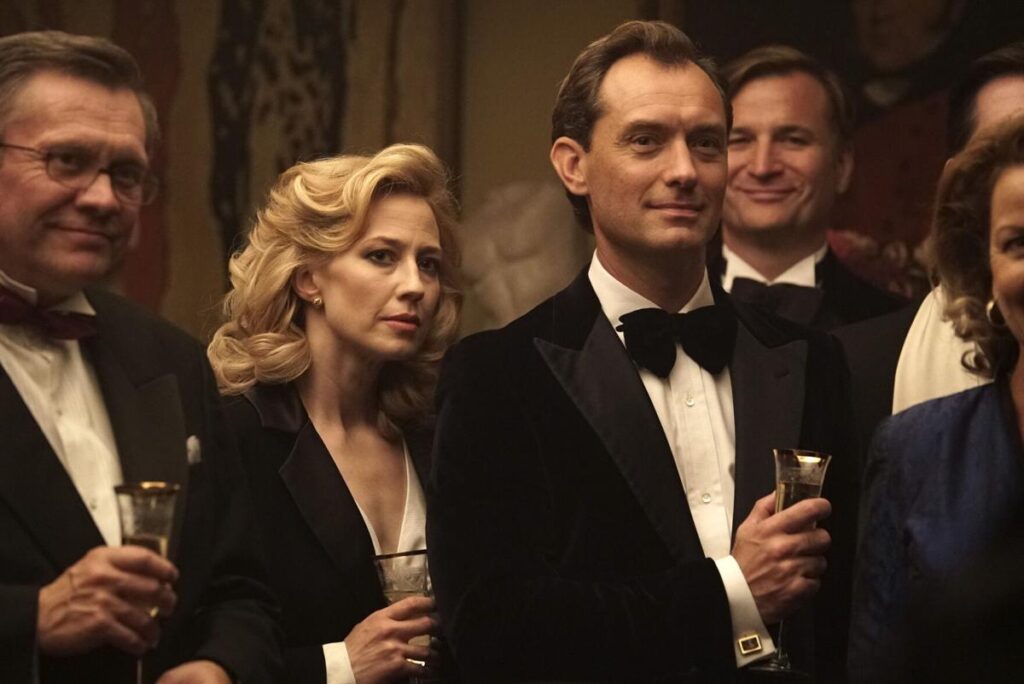 Written and directed by Sean Durkin, The Nest marks a return to feature filmmaking after a near-decade hiatus, which began with the excellent drama Martha Marcy May Marlene. In it we follow the life and times of an English entrepreneur and his American family as he makes a bold attempt to raise his financial and social station by relocating to a gigantic manor in his home country. Rory (Jude Law) grew up poor but has significantly improved his status working as a commodities broker. He now lives in America with his wife Allison (Carrie Coon), their son Benjamin (Charlie Shotwell), and Allison’s daughter Samantha (Oona Roche). Allison raises horses for a living while Rory keeps himself busy in the faceless realm of corporate business stuff. While the ins and outs of his work are not of concern for this story, it’s easy to understand that he’s in the “money business,” and the only product he can be accused of manufacturing is wealth.

While this life seems pretty ideal, Rory pitches an idea to his wife: Pick up and move everything to England so he can follow through on a really large deal. If all goes to plan, untold riches will await, and all members of the clan will be set for life, free to spend their time doing anything they wish. Basically, the American dream. Allison pushes back at first, happy with what the family currently has/is, and not seeing the point in taking a gamble on unneeded wealth. Nonetheless, since a movie needs to happen, the family decides to follow through with the move.

The new house is a large, empty manor, with so much space as to be considered too much space. Not the worst problem to have, but the sudden and drastic change immediately starts to take effect on everybody. Benjamin finds the house to be almost supernaturally creepy, while also dealing with the bullying that comes with being the new kid at school. Samantha, also suddenly an outsider, sees this as an opportunity to lash out against order, succumbing to the teenage desire for experimentation. Allison, happy to now have the means to run her very own horse farm, begins to wonder how stable (ha!) this new life is given the shady nature of her husband’s business dealings. Rory, now on the financial hook for everything this sudden change entails, struggles to make his misinformed gamble pay off.

Stressors begin to pile up on pre-existing tensions and, at its heart, The Nest is a movie about the cumulative effects of these stressors. Dishonesty, misinformation, and ego, especially as it relates to class fuel the slow disintegration of this family unit, and Durkin’s script, mixed with across the board excellent performances, gives a tense energy to what could have been a slow burn thriller. It’s incredibly watchable, even as it grows increasingly hard to watch.

The script focuses entirely on the emotional fallout of Rory’s decisions and his family’s valid resistance to them. What it leaves out is the minute details of his business. At points this feels like an issue, as we don’t really have a grasp of what it is he’s trying to sell. That said, this is only necessary information in how it would fuel Rory’s own decision-making process, which is just a small part of the film itself. We’re not here to root for or against his business acumen. Instead we are here to study his pathology. While my personal curiosity wants to know if he’s logistically off base with his attempts at financial freedom, the movie is much less about plot machinations and much more about the personal effects of doing business in such a self-centered and haphazard way.

As a viewer, once you make peace with the limited plot details, you can dive into what really matters: story. Through the behaviors of the family, Durkin finds an arena in which to probe the performative nature of success — is “fake it till you make it” a valid method of obtaining status? Is social status even a valid concept if it was achieved through falsity?

There’s a lot to chew on here, but I’ll bring it right back to where I started. Carrie Coon. This is her movie, and while she shares the burdens of leading the film with Jude Law (also giving a career-high performance), she practically torches the screen. She gives us happy, contented Allison, a woman who any of us would be privileged to know, let alone share a family with. She gives us dolled-up Allison, willing to play the image game, but unwilling to be relegated to second position behind her husband. She also gives us repressed Allison, grieving Allison, and “I’m sick and tired of this shit, I dare you to stop me” Allison. Her many permutations of character are all powerfully human, and quite relatable. Even in the film’s more animated moments, when Allison is hidden behind fancy clothes and layers of foundation, Coon lets Allison’s humanity shine through, and when it comes time to assert the woman behind the facade, it’s positively delicious.

Much like with Martha Marcy May Marlene, Durkin has created a character study that fills the periphery of the story with doom. Our characters sense its approach, but cannot see things on a macro level, instead piling on micro-conflicts that build into an untenable emotional burden. When a passionate person finds her back against the wall, surrounded by invisible forces malevolent toward her most basic needs, lashing out and giving up start to look very similar. When that happens, all anyone can do grin and bear it. Ya know, fake it til you make it.

I should mention that the score (very good) is done by Richard Reed Parry of Arcade Fire fame, but I’m biased against him because at Bonnaroo one year I left Primus early to catch Arcade Fire and I still don’t know why. I even knew it was the wrong move while I did it, but I did it anyway. In that way, I felt a lot like the characters in The Nest.

Opens at Ritz Five in Philadelphia September 18, 2020, landmarktheatres.com, and nationwide on VOD November 17, 2020.