The scariest thing I can think of, outside of a talking octopus that walks on land, is mental decline, the sad truth being that, if one lives long enough, it’s unavoidable. Even those who aren’t diagnosed with some form of dementia still experience memory lapses and other such signs of degeneration as time passes. I can only imagine how scary it is to experience, and many of us, myself included, have been in the heartbreaking position of having to watch a loved one fall victim to it. The emotional trauma surrounding mental decline is just as difficult to navigate as the logistical hurdles it introduces into a family’s routine. It’s as close to a legitimate horror movie as most of us will be unfortunate enough to experience, so it’s a terrifyingly natural fit for the genre. Writer/director Natalie Erika James imbues her feature debut with this metaphor, and the result is one of the most effective and scary films of recent memory.

Relic tells the tale of a daughter, mother, and grandmother coming together in a difficult time. Edna (Robyn Nevin) is of an advanced age, and she lives alone in a large, isolated property that has been empty ever since she became a widow. It’s clear at the outset that living alone has become a challenge for her, even if she doesn’t think so. When Edna stops answering her door, her daughter, Kay (Emily Mortimer) and granddaughter, Sam (Bella Heathcoate) pay a visit to make sure their aging matriarch is safe and sound. They arrive to find that the reason she hasn’t answered her door is that she’s simply not home. After poking around town a bit, they discover that nobody knows where she is. The house is in a state of disarray, filled with signs of potential dementia. Post-it notes reminding her to take her medication and other such tasks pepper the route of her day-to-day life (“it’s my house, I can decorate it how I want,” says Edna in this regard), while a layer of tokens to her memories cover every surface — photographs, clothing, keepsakes, etc. It’s pretty clear that new living arrangements must be made for Edna, if only they could locate her. 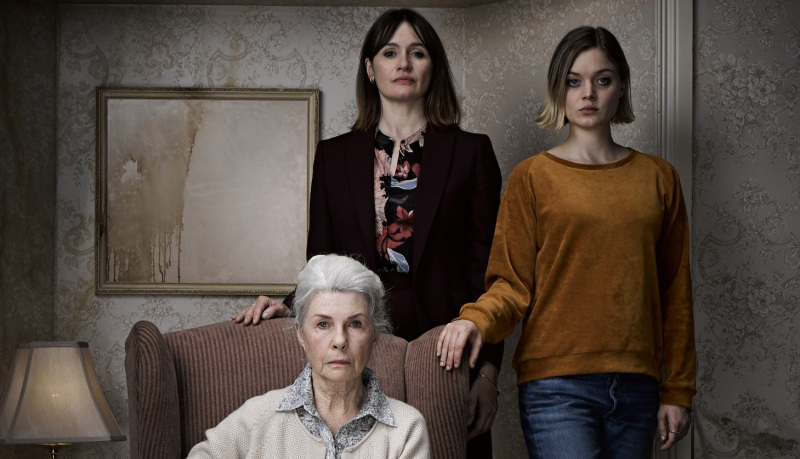 And then suddenly she’s home. She has no memory of where she’s been and is utterly dumbfounded that her own family sees this as an issue.

Much like The Babadook did with mental health/anxiety, Relic takes the concept of dementia and makes it the driving narrative force. As spooky images and geographic inconsistencies haunt the periphery of the story, we are forced to wonder if the troubles Edna faces are completely internal or if there is something supernatural going on to boot. Add to that the wild fluctuations in Edna’s mood and cognition and both Kay and Sam are understandably quite on edge. It’s one thing to be selfless when a loved one might be in danger, but it’s a much different story when there might be a larger threat to deal with.

Relic is quite empathetic to its characters in terms of depicting their response to an untenable situation. Tough love is called tough love for a reason, and the business of easing a loved one into the idea that they are no longer sufficiently able to care for themselves, so much so that a reduction in their agency is paramount, is the toughest kind of love there is. And when the loved one in question is understandably stubborn about their mental state, it’s downright painful. When the child becomes the parent, and “you’ll understand when you’re older” is replaced by “you’d have understood when you were younger” hearts will undeniably be broken.

While all of this is being explored, James (credit also due to co-writer Christian White) piles on the supernatural dread. A shadowy figure dips in and out of even the most innocent seeming moments while knocking sounds illogically emanate from behind the walls. It’s your typical haunted house stuff, but the methodical way it is employed here is a source of near constant chills. It’s a slow burn to be sure, but the characters are so well realized and so easy to care for that I spent most of the time hoping against all hope that they would manage to avoid the horror movie I signed up for, solve their problems, and go home happy. I believe Hitchcock said something along the lines of how horror is worthless unless you care about the characters, and such notions are taken to heart in Relic. One gets the sense that James has firsthand experience dealing with the mental decline of a loved one.

Hitchcock also said “There is no terror in the bang, only in the anticipation of it,” and while this is mostly correct, Relic has its cake and eats it too in this regard. The buildup is wonderfully unbearable as we watch these genuine humans go through an all too common situation (which, as previously noted, may be more than meets the eye), but when the curtain falls and the banger of a final act kicks off, the terror remains. In fact, it multiplies. As Relic closes in on the home stretch, it moves from unnerving to downright ghastly. While the film’s commitment to ambiguity may frustrate more answer-oriented audiences, it’s this same ambiguity which will give the film its lasting power. Without the stark iconography of a thing like The Babadook, this chiller simply must rely on the minds of the audience to create fear. How appropriate.