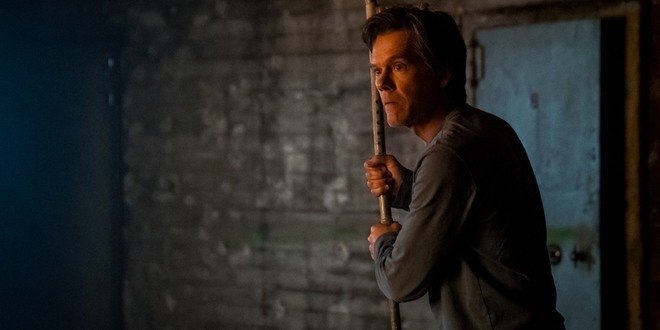 A lot of folks saw the trailer for You Should Have Left and thought “Oh my goodness, Kevin Bacon is so much older that Amanda Seyfried and they’re supposed to be married?!? Won’t somebody think of the children?!? This is the most important problem!!” For those folks I have some good news and some bad news. The good news is that their age difference is very much a part of the plot, and not just an emblem of a too-common Hollywood trend where aging leading men are romantically paired with considerably younger actresses. The bad news is that it’s not worth putting to much thought into anyway since this movie is pretty lame.

Written and directed by David Koepp, You Should Have Left is a mix of two of his previous efforts, Secret Window and, more obviously, Stir of Echoes, with which this current film also shares a star/muse in Kevin Bacon. I say “muse” because Bacon also serves as executive producer and I personally find it impossible not to be inspired by someone whose last name is Bacon, which is basically candy meat. I’d be doubly inspired by him if his name were Kevin Pork Roll. Less so if he were Kevin Tangy Pork Roll.

The tang is just too much. It’s not for me.

Then again, tang is exactly what You Should Have Left needs. While straightforward and plainly functional, it’s a very flat film. A very flat film that serves to remind you of a hundred better movies, all of which have more flavor, more zazz, more, well, anything. The ball hasn’t been dropped per se, but it’s barely even been picked up in the first place. As an entertainment, this little chiller will do in a pinch, but there’s just not much to celebrate here. What hurts the film most is that it truly seems to view itself as some next-level mind-bender, but it’s just a pale imitation of an already dated set of tropes.

Theo Conroy (Bacon) is old. His wife Susanna (Amanda Seyfried) is young. Can I make it any more obvious? He ran a bank. She acts in plays. What more can I say?

Anywho, in an effort to spice up their relationship while Susanna is on break between film roles, the couple and their young daughter take a trip to the Welsh countryside. There, they’ve rented a massive house that sits atop a hill. Is it a haunted hill? Do read on!

The locals move a little slower than these Americans are accustomed to, and there’s very spotty cell phone service to boot (until there’s not). No matter. The whole point was to get away from the hustle and bustle of a privileged life and step off the grid for a bit. Their daughter Ella (Avery Tiiu Essex) seems utterly enchanted by the place, so perhaps this is just what the doctor ordered. Soon after arriving, however, each family member starts to suffer from similar nightmares, oftentimes waking up in a cold sweat only to find out that they’re ACTUALLY STILL DREAMING! How shocking! No lie, the whole “I woke up from a dream and now I’m still in a dream” thing happens multiple times, each time more obvious and less scary than the last.

Obvious is the operative word here. Very little gets through to the audience that isn’t spoon fed to them. Characters waking from nightmares will say “what a nightmare” or, will expressly say things like “hm, this room is 21 feet in length when we measure it from the outside, but 26 feet when we measure it from the inside. That makes no sense!” To be fair, inconsistent geography is a trick that The Shining employed to great subconscious effect, but it’s the unsettling feeling it silently provided, not someone explaining the architectural inconsistencies outright, that made it work. In another example of painfully didactic scripting, Theo is writing in his diary as a form of therapy (being coached by a book on tape). He is instructed to describe his feelings “using one word descriptors.” He angrily writes the following list:

“Pissed” is aggressively underlined for effect.

As strange occurrences become more common, the family must ask themselves if this house is indeed haunted, and if any of it has to do with either Theo’s potentially sordid past, or with his current hair-trigger toward jealousy. Hint: it has a lot to do with both but also kinda doesn’t have anything to do with anything.

Both Bacon and Seyfried do a fine job, with Seyfried being the only one who really understands the tone that could make this movie work, but her performance is lost in a sea of misdirected creative choices. The little family unit that is established feels genuine enough, but this is much more a result of the performances than the script. Had Koepp chosen to lean into melodrama, bolstering it with knowing B-movie sensibilities, this could have been a total blast. But since the film takes itself so dang seriously and has some of the flattest direction and most vacuous design I’ve seen in ages, connected by some notably slipshod editing, it ends up running out of steam pretty quickly.

It’s a shame to see, since at least for the first act or so, the mystery behind it all is compelling enough to hold interest. Unfortunately, the solution to the mystery reveals itself long before the movie seems to think, and ultimately doesn’t matter much once Koepp cluelessly yanks the rug that no one was standing on anyway.

There is a sort of demon-hick dude (Geoff Bell) that pops up here and there to give a face to the scares, and even though he’s easily the most interesting design choice/performance in the whole film (and the only source of any genuine frights), he’s functionally weightless. Still, in the moment he’s quite striking. Maybe we can all agree to forget that this movie exists and instead have this guy fight Freddy or something.

On a rainy day with nothing better to do, You Should Have Left will prove serviceable enough for non-discerning viewers, but beyond that it’ll just make you want to watch one of the many superior films that it’s drawing from.