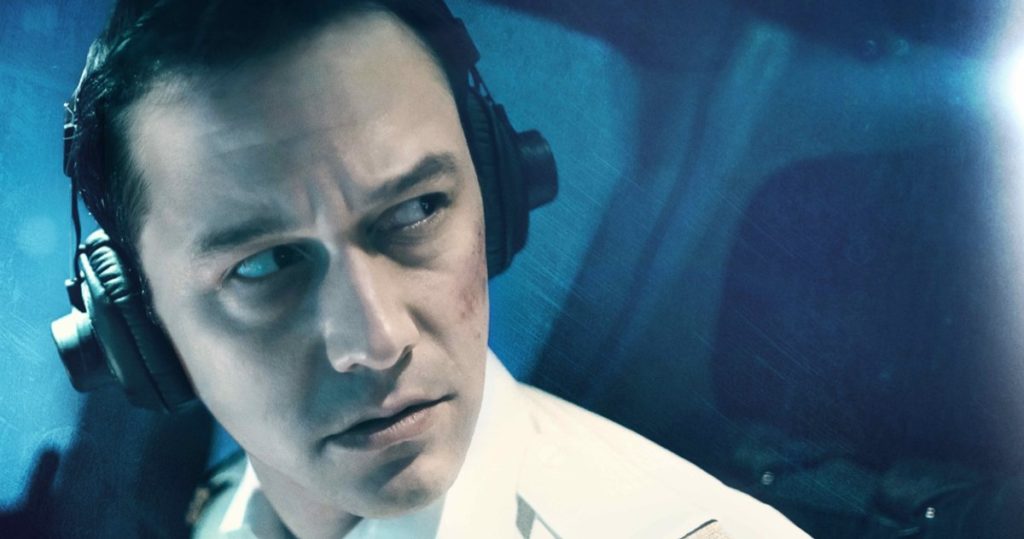 The distress code for a hijacking or unlawful entrance into a plane’s cockpit is 7500, and it’s from this that the taut thriller 7500 gets its name. Taking place entirely within the cockpit of a hijacked commercial airliner, this minimalist performance piece benefits greatly from a high-level of sustained tension. Whether it has anything to say is another matter, but it’s a matter that, in the wake of holding my breath and clenching my rear for a solid 90 minutes, isn’t an issue for me. While the absence of any real world commentary may sink the film for people who require such things in a post-9/11 world, those chasing an exciting, workmanlike flick will not be disappointed. Really, 7500 is exactly the type of entertaining distraction that would be suited perfectly to airline viewing, if only it weren’t about a terrifying mid-air hijacking.

The bulk of the film takes place in the cockpit of the airliner in question, but the opening few moments consist entirely of security footage from an airport. From each new angle presented we see the standard sights of air travel: tired faces dragging heavy luggage through crowded passageways, the same tired faces catching a few fleeting moments of shuteye in the waiting area, pilots and attendants racing to get to their assigned gate. All normal, every day stuff. I kept my eyes peeled for shady goings-on, sure that this footage was meant to draw my gaze to a suspicious character or two, but alas, nothing. Perhaps that’s the whole point — this really is just another day at the airport.

Well, until it isn’t.

Tobias Ellis (Joseph Gordon-Levitt) is the co-pilot on a pretty standard Berlin to Paris flight. His significant other, Gökce (Aylin Tezel) is one of the flight attendants. Prior to boarding, she visits the cockpit to discuss a personal matter regarding their young son. “It’s not a disaster,” Tobias assures his concerned partner, both clueless to how disastrous the next hour or so is going to be. The captain of the flight (Carlo Kitzlinger) joins Tobias in the cockpit and the two have a short discussion over whether or not to wait for a few tardy passengers, or to just have the latecomers’ luggage removed from the craft to get things under way. Their conversation is short, with the subordinate Tobias saying that he doesn’t mind waiting, but ultimately relenting to his captain, whose interest is one of maintaining a schedule. Suspicious? Maybe, maybe not.

Smart exchanges like this are littered throughout the script, serving to tell us about the personalities of our main characters without outwardly expositing, as would often be the case with a single-location story. Right off the bat we know that Tobias is a good guy. He’s thoughtful, kind, and largely disinterested in making waves. We get the sense that he’s a “trust the process” type. Unfortunately for him, a few deviations from process might be in order. Shortly after takeoff, a group of hijackers rush the cockpit door, and before long Tobias is the only person who can potentially save the day. While he’s not really the heroic type, fate has forced him into stepping up.

What follows is not an action film, but rather a wickedly intense thriller, often to the point of inducing an involuntary physical response in the viewer. The camera never leaves the cockpit, and our only window to what’s happening in the cabin comes in the form of a small monitor that gives Tobias a look at what’s immediately outside of his door. Although protocol dictates that he shouldn’t open the cockpit door under any circumstances, this is made a less tenable position when the hijackers begin taking hostages.

The direction finds a lot of cinematic geography in such a small space, although there are a few moments when the camera gets so close to Levitt’s face that it becomes a touch gaudy. No matter, for the most part it works, and this has a lot to do with Levitt’s quietly terrified performance. Tobias knows the weight of every decision he must make in order to safely end this situation with minimal damage, and he wears this weight on his face in every moment. For this, we do indeed need to get all up in his grill, but the tight camerawork does take some getting used to. As the film progresses and begins to breathe a bit (just a bit — this flick is INTENSE), it’s easy to forget that we have never once left the setting.

By the time the third act comes barreling in, the single location conceit begins to lose some of its power, and your standard hostage negotiation histrionics start to take center stage (a term I use purposefully – 7500 would make a great stage play). The tension notably dissipates at this point. Not by much, however, but even with the necessities of the plot mechanics/setting requiring some sort of change of pace (I’m trying hard not to spoil), it’s a noticeable shift after a solid hour of sustained and harrowing intensity. Then again, if this went full Executive Decision, it would be a pretty lame finale.

No love lost to Executive Decision, which is a personal favorite.

Yet even with a third act that relies a lot on “You don’t want to do this! Let me help you!” it ultimately sticks the landing, ending on one of the most emotionally wrenching moments of recent memory. Instead of ending this one with a fistfight and a ball of flames, 7500 maintains a level of humanity that is never betrayed. That’s the word for it: human. This, as I, a non-pilot would guess, is exactly how a situation like this would play out in real life, at least in terms of the processes put in place for such an event, and how the very real people forced to act on these processes would behave. This humanity is what keeps the tension so high, so personal. It’s what keeps the dual notion that Tobias has the tools to succeed, but could also just as easily fail, alive from beginning to end.