Balloon (directed by Michael Herbig) is the real-life story of two East German families attempt to escape to West Germany via a homemade hot-air balloon. Made in honor of the 30th anniversary of the reunification of Germany, the film details the race against the clock and the Stasi, to complete their dramatic departure.

Filmed with constantly rising tension, it is a movie without reprieve. Every seeming break or temporary pause to relish a moments freedom is followed by a gasp or stressful montage indicating the enemy is hot in the trail. The movie depicts the Strelzyk and Wetzel families second attempt at a makeshift balloon. The Stasi, the East German KGB, have found the remnants of the first failed effort and are investigating to find the culprits.

Along with the driving music and the claustrophobic cinematography, it is these simultaneously contrasting movements, that create the force that drives this movie along.  Sometimes filmed with the ever present fear of a horror movie and at other times, the watchful, looming anxiety of a master like Hitchcock, Balloon captures the sensation of what it must be to live during a turbulent time for a nation overwhelmed by oppressive leadership. 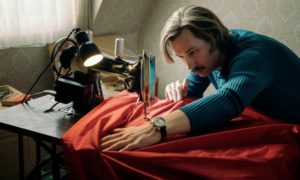 It is just this effect that director Herbig wished to portray.  First seen as a 1982 Disney movie   called Night Crossing, directed by Delbert Mann.  Herbig wanted to tell this classic story from an authentic German perspective.  This perspective seen in the moving desires to reunite with loved ones, both early in the film and after the escape gives the movie its heart. The deep sighing relief after the years of planning  and indeed the decades living in the shadow of this ever watchful regime, gives the joy at its success an emotional power, similar to what must have been felt during the first announcement of reunification.

This movie is a feel good story fulfilling all of our hopes for a happy ending despite the constancy of overwhelming fear. During our current pandemic, that is a wish we call can celebrate. If there is one critique of this masterfully filmed movie, it is that the tension is relieved without outcome or reciprocity. The impact on the story telling makes for an almost anticlimactic ending. Despite the positive result for the escaping families, there were repercussions for family members left in East Germany. Believing others involved, the Stasi interrogated and imprisoned close relations. East Germany applied stronger restrictions upon its citizens ensuring this escape could not be replicated. The East German government stayed in power for over a decade, separating countless families and executing those who tried to escape.

Still, this movie does give us hope, reminding us that even in the darkest moments of history, there can always be a way towards freedom and a better way of life.