Videographer Brian Siano captured one of the best plays by local playwright John Rosenberg, with a multi-camera, professional taping. Staged in 2013 and set in 2003, Alp d’Huez stars Jennifer Summerfield as a doctor who visits Paris to join her husband (Rosenberg), an American cycling fan following the Tour de France in the days when George Bush was leading the country into an internationally reviled war and Lance Armstrong was cheating his way to tour dominance. Though contained entirely within a hotel room, the emotion rises and falls like a undulating mountain stage.

If you like this, you could listen to a version of Rosenberg’s Cana of Galilee.

Siano made another high-quality recording of this 2013 production, Paul Kuhn’s semi-autobiographical original play Madville, staged at Curio Theater, where he’s artistic director. It tells the story of a man (Kuhn) who has taken his family to live on a remote track of land in Nova Scotia. Jennifer Summerfield again costars as the mother trying her best to hold it together and provide for kids (Eric Scotolati, Josh Hitchens, Harry Slack, and Rachel Gluck). 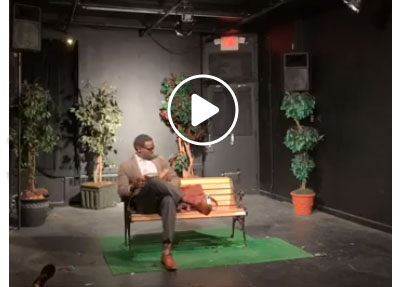 Wings of Paper Theatre Company was all set to begin its run of Edward Albee’s The Zoo Story, scheduled for March 13-23, 2020, when the coronavirus changed plans across the globe. Instead, the company live streamed the classic two-hand park bench play. Catch the recording while it’s still on Facebook.

MAKING the WORLD a BETTER PLACE through MURALS, Automatic Arts

If you’ve explored Philadelphia much, you’ll know we have more shitty murals than any other city on earth! In this 15-minute two-hander, local playwright Josh McIlvain imagines a Mural Arts worker beginning to realize that maybe putting bad art on the walls isn’t the best way to improve a city. Read the script here.

One more 2013 play by a local playwright recorded by Brian Siano in a multi-camera taping. For that year’s Fringe Festival director Liam Castellan put on a play by Lindsay Harris Friel about a fictionalized meeting between sixties icons Brian Epstein and Joe Orton. Read a contemporary interview with the director.

If you have a video of a show you’d like added to this article, email chris@phindie.com.