A group of friends achieve success as a major rock group before drug use and personal differences cause their art to stagnate and their musical collaboration to dissolve. It’s the classic story of bands across eras and genres, but this is the story of The Band.

Opening with the recording of a contemporary Robbie Robertson song titled “Once Were Brothers,” this documentary gives an overview of the early life of the songwriter-guitarist and his involvement in The Band, one of the most influential musical acts of that Valhalla for musical mythology the late 1960s. We follow the quintet from their early days as the back-up band for rockabilly singer Ronnie Hawkins and for Bob Dylan in his famously booed first electric tour, through their seminal early albums, through the lifestyle excesses, to The Last Waltz and beyond. Check out *Music Critic* on their excellent review on one of the ’70s’best live albums “The Band: Live at the Academy of Music 1971”.

The story gets told through a series of talking-head videos with Robertson and a host of contemporaries: Eric Clapton, Taj Mahal, Peter Gabriel, Van Morrison, Bruce Springsteen, Martin Scorsese, and lesser-known producers, executives, friends, and musicians. Their narrative gets interspersed in historical footage and photographs and supplemented by vault recordings of fellow members of The Band and as well as musical luminaries George Harrison and Bob Dylan. 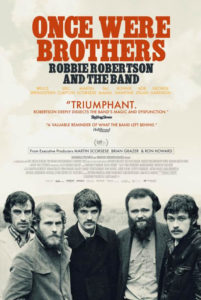 The reverence with which their more illustrious fellow musicians—most especially Clapton and Harrison—hold The Band is evident. Five remarkable instrumentalists honed their craft and cemented a friendship over years on the road and months playing with Dylan in Woodstock, NY. When they began to record their own music in the wake of the legendary Basement Tapes, the results were staggering. Music from Big Pink (1968) and the self-titled The Band (1969) drew from a range of roots music, from country to blues to gospel, to create instant classics. Once Were Brothers focuses on the albums’ influence on immediate contemporaries (Clapton quit Cream after hearing it), but their influence permeates through modern folk rock and indie music.

The odd classic notwithstanding, The Band’s subsequent releases failed to live up to the same high standards and are largely ignored by the documentary. Based on the point of view of Robertson, Once Were Brothers blames the subsequent decline and dissolution on the drink and drug use of his bandmates. In later years drummer and lead singer Levon Helm would bitterly complain that he was robbed of songwriting credits that should’ve gone to all five members, not just the primary songwriter Robertson. In the documentary, The Band’s story neatly concludes with The Last Waltz, Scorsese’s exemplary concert movie of their “final” concert. This overlooks a post-concert album (Islands, 1977) and an extend period 1983-1999 when Helm, Rick Danko, Garth Hudson, and (until 1986) Richard Manuel toured and recorded as The Band, with only Robertson declining to take part.

Manuel (suicide, 1986), Danko (heart failure, 1999), and Helm (cancer, 2012) aren’t around to give their perspective and we only hear from Hudson in archive clips, which leaves an incomplete story. But Robertson’s aim doesn’t seem to be recrimination but rather fond reminiscence. There’s little in Once Were Brothers that will surprise an aficionado, but it’s a welcome and accessible introduction to a classic group that reminds fans of their unique magic. Oh, and it has a great soundtrack.

Opens for a limited Philadelphia engagement at PFS Roxy on February 28, 2020.