The Arden Theatre Company’s production of My General Tubman is the world premiere of a play by Lorene Cary, an impassioned African American voice, a local author with a major literary reputation.  Her first book was Black Ice, a memoir of her teenage years in a white, posh boarding school where she felt that it was time “to play my part in that mammoth enterprise—the integration, the moral transformation, no less, of America….I had been waiting for this the way a fairy princess waits for a man.”

Several decades and many books later, My General Tubman is her first play; it throbs with this same sense of moral obligation, and Harriet Tubman may be the person Cary was waiting for, her Joan of Arc. An escaped slave who became the hero of the Underground Railroad, Tubman famously led many people to freedom. But that familiar story is not the one Cary is after. Instead, she wants to show us both the shrewd military strategist and a woman in love. 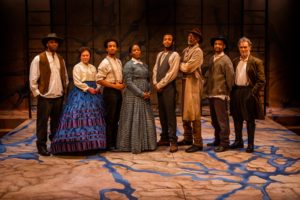 The love story depends on time travel, since the play begins in a contemporary prison where Nelson Davis (Brandon Pierce) has just been arrested. Oddly, Cary’s creation of the modern Nelson Davis is as a boyish, unsympathetic character. Tubman (Danielle Lenee) comes to him as a visitation, and we will eventually see that Davis travels back to the mid-19th century to become Tubman’s husband.

Since there are, surprisingly, no informative program notes, and if we don’t know as much of the history as the play assumes we do, we are left to figure much of it out on our own, picking up bits of history as the play’s fragmented multi-scene structure provides it. My General Tubman wastes much of the drama of Harper’s Ferry—a catastrophic failure led by John Brown (Peter DeLaurier)—by reducing it to a newspaper report, and then attempts to act out the triumph of the Combahee River. We see a rich Southern woman (Cheryl Williams) help Tubman who is being hunted with a $40,000 bounty on her head (the equivalent of about $1,300,000) by hosting fund-raisers in which Tubman is advised to  “make it quaint.”

All this is complicated further by the shifts between the Civil War and the Philadelphia prison, which is seen as contemporary version of slavery. A chaplain (Dax Richardson), a fellow inmate Earl (Damien J. Wallace) and the guard (Bowman Wright) are all swept into time travel as a spiritual reality, “ancestors calling.”

We are guided throughout by the Narrator (Aaron Bell) who reminds us at the end of the show that Tubman may be the new face on the $20 bill—the only line that gets a laugh from the audience, a laugh that is silenced when the Narrator cautions us with this: “Will we remember how cheaply we hold the memory of those Americans America bought and sold? Or will we just spend them yet again?”