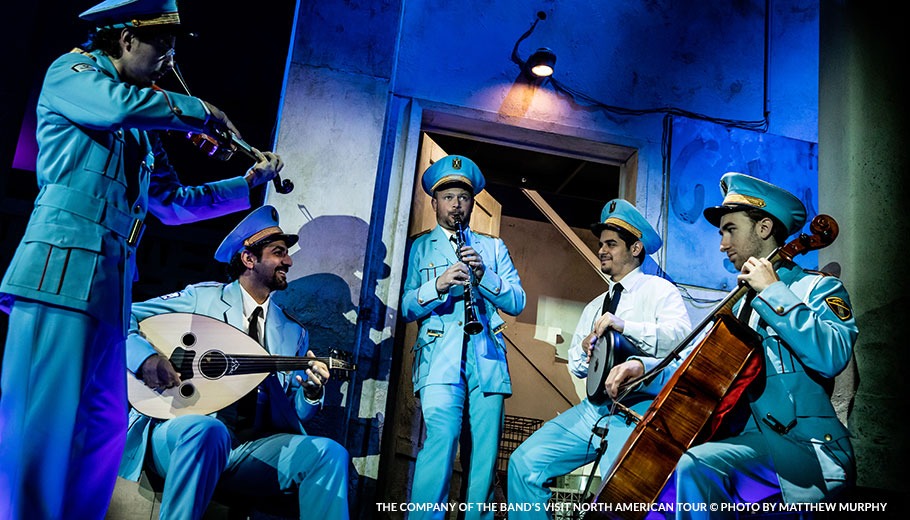 Usually when professional actors are listed in a show’s program there’s an asterisk next to their names which leads to the footnote: “a proud member of Actors’ Equity Association.”  In the program for the disappointing production of The Band’s Visit which just opened at the Academy of Music, the two stars, Janet Dacal and Sasson Gabay—both of whom have substantial credentials—are listed as “appearing with the support of Actors’ Equity Association.” I’m not sure what that odd phrasing means, but what is clear is that the rest of the cast are not professionals, and boyohboy does it show.

Almost everything about this production feels amateurish—the acting, the singing, the scene changes, the lighting— and between the over-miking and the accents (fake and real), it’s difficult to understand the words.  So, for a show that depends on charm, it is distinctly charmless. Of course, it’s pointless ot compare this to the Broadway production which starred the sensational Katrina Lenk and Tony Shaloub, both of whom have charm to burn.

Created by David Yazbek (music and lyrics) with a book by Itamar Moses, The Band’s Visit defies every expectation of a Broadway musical: no big production numbers, no flashy costumes, not even a plot, really. It’s just about people waiting and hoping and meeting each other and being kind.  It should be tender and moving and funny the way people who are waiting and hoping in a boring little town in the middle of the desert would be.

Into this little Israeli town in the middle of the desert comes an Egyptian band who has gotten on the wrong bus, mistaking one place name for another. If you’ve traveled in places where you can’t speak or read the language, you’ll understand immediately how this band wound up in the wrong tikva: on their way to the Israeli city of Petah Tikva, they find themselves in Bet Hatikva. I don’t speak Hebrew or Arabic, so I looked up the word, “tikva” and  learned that it means “hope” and comes from the Hebrew root kavah meaning to bind together. Perfect.

The musicians are terrific, and there are some sweet moments, but too much is lost.

One Reply to “THE BAND’S VISIT (National tour at Academy of Music): Lost in transit”