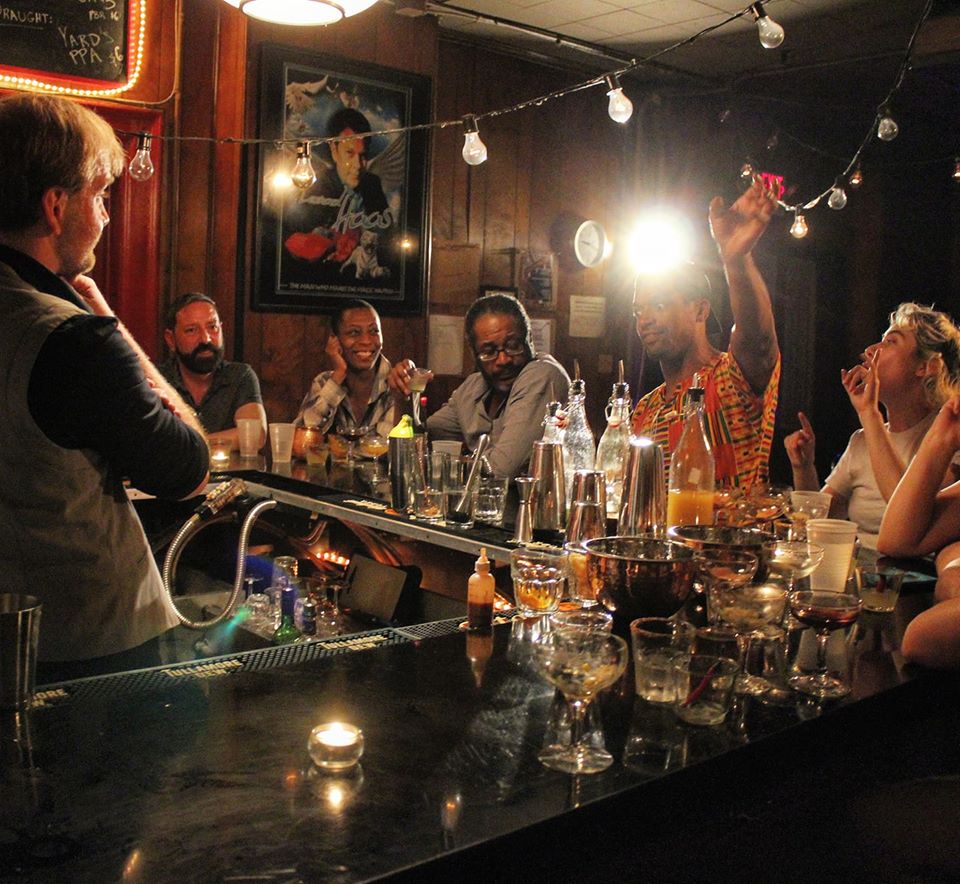 Up the stairs to Quig’s Pub in the Plays and Players building, Die-Cast co-founder Brenna Geffers and theater artist Davey Stratton White are mixing up an immersive evening of epic poetry, gentrification, and cocktails.

Gintry is a remount of the June production in the same space that occurred during 2019’s So Low festival. Die-cast refers to a type of iron making in which hot metal is made to conform to the mold around it under intense pressure. This is an apt image for a theater company that sees the spaces they perform in as critical elements of their storytelling. The action takes place behind and around the 12-seat bar. While Quig’s is a historic pub in Rittenhouse, for the evening we are transported to a new, hip cocktail bar in Point Breeze. Throughout the 50 minute show, those seated around the bar are served about four different craft cocktails.

Gintry is billed as an “epic poem about gentrification and craft cocktails.” Our poet is Whitey (White), a millennial, white dude who is opening up said bar. The success of the play rests in White’s skill as both performer and bartender. Witnessing the technical ability with which Whitey makes his cocktails is exhilarating, like watching intricate choreography deftly executed. White (the actor) and Whitey (the character) are certainly masters of their craft.

The other bit of magic comes from the fact that these very good cocktails match the story. The sweetness and bitterness ebb and flow throughout the evening.This brings the design of the show inside your body. Drinking is a social act. During the climax of the show, Whitey mixes a drink that we see contains a very spicy pepper. He hands the drinks out in silence. The audience takes a few moments to look around at each other. Are we going to drink this? Someone does, the rest of us follow. We hear the first choke. Unsurprisingly, these drinks are very spicy. Whitey then goes into the heaviest poem of the show; the heat in our belly and lips emphasize the anger and pain in his words. I can’t think of a time that my sense of taste and smell have been so well incorporated into a production.

The biggest challenge for the show to overcome is actually the structure of the script itself. Because this show is written as an epic poem, it can veer into the abstract, and solipsistic. The poem often contains rhyme which (for me) was a little cringe-inducing. The highly stylized poetry seems at odds with both the down-to-earth venue and the very real and visceral story we are being told. I wonder how the show might be served if it was a more naturalistic conversation between bar owner and patron? In making the show a bit more plain-spoken, the role of the audience as consumers and gentrifiers might be more impactful.

The politics of this show also confound. Our entry into this story of gentrification is, at heart, a gentrifier with good intentions. Rather than grapple with the capitalist institutions, large scale developers, and systems of white supremacy, we get grand allusions to conquistadors and early the original displacement of the Lenape. These parallels are surely potent, but it all amounts to something of a white guilt pageant. Essentially Whitey (and the audience) leaves the play feeling like there is not much we can do except watch the world burn and hope for the best. At least there are cocktails.