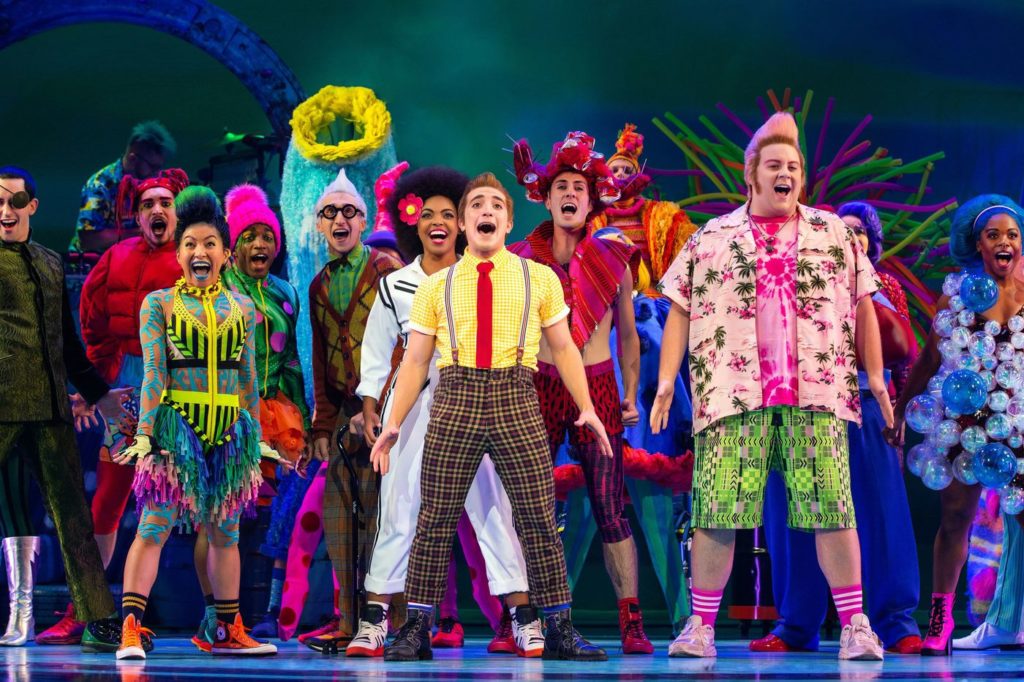 To all but the most die-hard cartoon lovers, the idea of a Spongebob Squarepants musical is sure to elicit some groans and eye rolls. “Must we stoop so low?!” Critics (or haters) are bound to say. The very idea brings to mind horrifying costume character recreations, insipid songs, and tired, recycled storylines. What a surprise these haters (myself included) are in store for when they witness the shockingly original, tuneful, and heartening Spongebob the Musical at the Forrest Theatre through December 15. In the first act alone, there are more interesting theatrical ideas than I have seen elsewhere all season!

Fans of the show will recognize many favorite characters in the musical conceived and directed by acclaimed theater artist, Tina Landau. Bikini Bottom is in danger! A volcano is going to erupt in two days and the underwater citizens have to find a solution. As in the real-life climate crisis, some turn to religion, some try to exploit for capitalist gain, a few try to scapegoat those that are different, and almost everyone seems to distrust science and government authority! Thank Neptune, then, that Spongebob (Lorenzo Pugliese) is here with his friends to find his inner strength and save the day! Amazingly walking the line, the show is smart without being smug, and good-natured without being saccharine.

The tour is non-equity; I was delighted to see some strong performances from actors who are relatively early in their careers. UArts alum Lorenzo Pugliese stars as the eponymous sponge; he is one to watch! He bounds from the stage with goodwill, a charming smile, and seemingly limitless energy. His “I want” song, “(Just a) Simple Sponge” is filled with glow-in-the-dark kitchen sponge choreography that took my breath away! He is joined by his best friends Patrick, the starfish, (Beau Bradshaw) and land mammal Sandy (Daria Pilar Redus). They both deliver! Other highlights include a showstopping tap number from Squidward (Cody Cooley) and a gruff ode to money from Eugene Krabs (Zach Kononov).

Landau and designer David Zinn made the smart choice to keep the characters and the settings theatrical. There are no styrofoam sponges or fursuits in this production. All of the characters look more or less human, leaving the actors to exude cartoon energy through their energetic performances. The set uses kitschy, neon detritus to construct a whimsical (yet appropriately theatrical) play space. Sound Designer Walter Trarbach and Foley Designer Mike Dobson bring all the cartoon boinks, squirts, and booms to life. The touring production features a foley artist (Ryan Blihovde)  on stage, so you can see the sounds being made!

In another surprising move, Landau commissioned over 15 musical artists to write songs for the production. The artists, ranging from Panic! At the Disco to David Bowie to T.I., all have varying degrees of familiarity with the musical form. Most, however, deliver great songs that help move the show forward and contribute to a surprisingly cohesive vision for Spongebob the Musical.