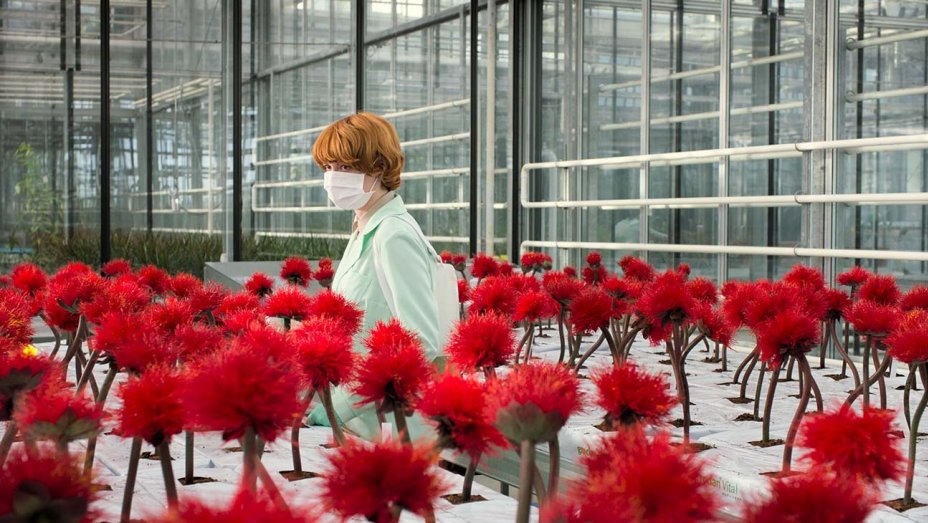 Little Joe is one of those small sci-fi films that falls into the category of “Would’ve made a great episode of The Twilight Zone.” It’s got a high concept, a solid design, and more than a few creepy moments rooted in existential terror, but it also struggles to fill a feature-length run-time. No matter, director/co-writer Jessica Hausner makes clean work of the story, imbuing it with enough style and tone to help it past its less substantial moments.

Emily Beecham plays Alice Woodard, a scientist at the helm of a potentially profitable development in the world of horticulture. She and her team (which includes Ben Whishaw), have designed a flower that functions similarly to a needy pet. It’s not easy to keep alive, requiring more than just a regular water regimen, but the reward of doing so is great. You see, the flower itself has been designed to have not just an enhanced smell, but also the ability to trigger the natural parenting mechanisms held within the caretaker. One who cares for a this plant can soon expect to love it just like a child. The theory is simple: Folks who are lonely and down can use the flower to consciously hack their own emotions and find meaning in an otherwise bland or depressive life. The flower is nicknamed Little Joe, and if the scheduled testing is completed in time, Alice’s lab will be able to premiere their creation at an upcoming convention, basically cornering the market for what is sure to be the future of the industry.

Despite this rush to market, there’s still some testing which needs to be done, and Alice is torn between meeting the deadline and keeping lab ethics intact. Just as she raises her concerns, evidence emerges that perhaps the effect that Little Joe has on its owners is more sinister than anyone could have imagined. This is doubly concerning for Alice, who went against the grain and brought a plant home for her young son.

I won’t say much more, for fear of robbing the film of what makes it so engaging, namely, the ambiguity of what’s happening. As a sort of riff on Invasion of the Body Snatchers, Little Joe is much more interested in keeping things low-key (nobody is running around in traffic screaming “they’re everywhere!!”), choosing to pile up the dread rather than unspool abject terror. It’s in this slow information release system where Little Joe really finds its legs. As Alice’s suspicions about the reach of her creation grow, so too do the potentially affected behaviors of her colleagues. Are they just enthusiastic about the upcoming release of the plant they worked so hard on to cultivate, or are they behaving outside of their own interests? It’s tough to tell, and Little Joe never shows its cards in this regard. The result being a unending parade of side-eye and loaded conversations, as Alice tries to root out the motivations of those around her while also keeping a healthy dose of skepticism about her own mental state. It’s downright creepy at points, especially during the sequences where Hausner uses imagery to suggest the plants’ sentience, and it’s not long before the projected characterization of the flowers themselves becomes an unsettling specter that hovers over the proceedings. Am I really afraid of a plant? Should I be? Only one way to find out, and by then it’s too late.

A slightly reduced run-time could really help this film out. There was a point about midway through where it became clear that the existential questions being asked were sort of on repeat. And while it was neat to see such things applied to different plot points, the thematics of “who can we trust?!?” aren’t employed beyond simple plot beats. No, Little Joe isn’t required to say anything deep with its story, but at just under two hours, it would’ve been nice to see this wave of dread crest into something truly horrifying. All said, Little Joe is worth checking out. As a thriller it mostly works, but as a showcase for the talents of filmmaker Jessica Hausner, it really sings. I am excited for whatever she brings to the table next.

As a person who suffers pretty awful seasonal allergies, I have the authority to say that Little Joe can make you fear pollen as much as I already do.

Released nationwide December 6, 2019; in Philadelphia at Ritz at the Bourse landmarktheatres.com