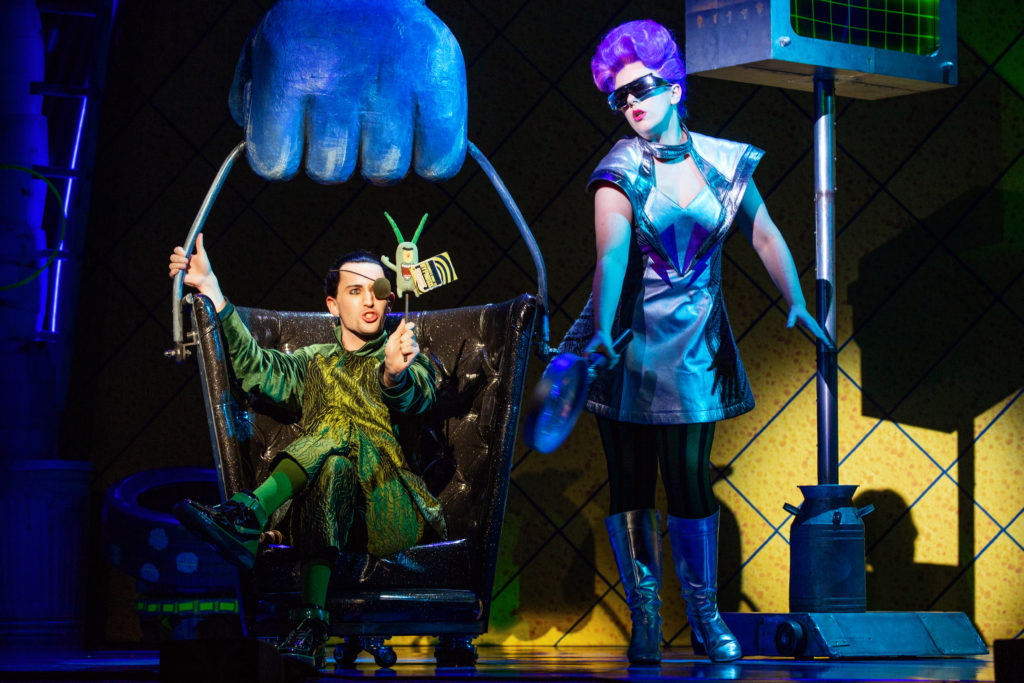 Among his many other skills, Tristan McIntyre can proudly add “planktonic copepod” to his list of theater roles. McIntyre joins SpongeBob and the proud residents of Bikini Bottom in the heartwarming production of The SpongeBob Musical. McIntyre is starring as Sheldon Plankton, who runs the unsuccessful Chum Bucket restaurant, with his wife. The show is based on the Nickelodeon TV show and features original songs from John Legend, Lady Antebellum and many more!

Debra Danese: How would you describe your character, Sheldon Plankton?

Tristan McIntyre: Deliciously evil! Small in stature, but big in intellect, presence, voice, and every other sense of the word. He may be the villain of the story, but I find him to be quite admirable. For Plankton, failure is never an option. No matter how many of his schemes fail, he always persists. He is misunderstood in a community of sea creatures who, both figuratively and literally, look down on him. In fact, Plankton had to overcome odds that could have limited his desirability to rise beyond himself: he’s small, comes from an idiotic family, possesses an intelligence far superior to other residents in Bikini Bottom, has been betrayed by his comrades, and has still succeeded. He’s established his own establishment, the Chum Bucket, built his own wife, Karen the Computer, and has created inventions that, although don’t always work, are quite brilliant. What others perceive as unfriendliness is no more than a defense mechanism. Plankton is capable of care until the animosity and idiocy of others forces him to retreat back to his own ways.

DD: Sheldon is plankton. What exactly is that?

TM: It is one-celled microorganism with a cylindrical-like body and prominent antennae. The way our Tony award winning costume and set designer, David Zinn, translates this onto the stage is magical. It consists of a polished, textured green suit with an eye patch to represent Plankton’s one eye and a slicked-back black wig with two braids to depict his two antennas. It’s brilliant. Plus, I get to wear custom made Nike air forces…so yeah, best costume I’ve ever worn!

DD: You say that you “accidentally” graduated a year early from school. I’m sure many students would like to know how that happened! Can you explain?

TM: Ha! Yes! I enrolled at the University of Southern California for theater with the intention of completing my degree in four years, but I actually got out in three! I walked into my junior advisement meeting last year, around this time, and my adviser said I could graduate in the spring if I wanted to. I came in with a bunch of AP credits and ridiculously took 21 units a semester, but I never considered this an option. I initially said no, but then a week later, I woke up with an epiphany to start working so I emailed him back and said, “I changed my mind…put me on the fast-track!” I had no plans whatsoever. I happened to audition for SpongeBob on my last day of college classes for the one day they were auditioning in LA and got the news that I booked the job a week after graduation. So it truly was an accident!

DD: You are a recipient of the John Ritter Memorial Award. Tell us about that honor.

TM: Sure! At USC, our renowned faculty at the School of Dramatic Arts provides select awards to distinguished performances from the season. The John Ritter Memorial was founded in honor of the late comedian John Ritter, alum of USC, and honors the dramatic arts student who has given the most outstanding comic performance during the season. I received the award for my performance as Tisiphone, a fury and fabulous drag queen, in Roberto Aguirre-Saccassa’s play, Rough Magic. From the award, I received scholarship money that I am able to use towards my student debt. It is also from this performance that a faculty member referred me to the managers that I am now signed with, so I am truly grateful for this performance and honor.

DD: What has been the most unexpected part of touring so far?

TM: How much of a family you become with these people, because all you really have is each other. Also, I’m constantly surprised by how exhausting the nature of touring really is! I have the same response to all my friends who ask me how it’s going: “Tiring. Stressful. Frustrating. Rewarding. Incredible. Enriching. Amazing. All of the above and so much more.” I’m the baby of the cast, so it may be expected that I’d be the one going out every night and exploring each city we’re in, but I surprise myself in regards to how boring I actually am. Most days, I sleep in, have a late breakfast, binge watch a TV show (currently Breaking Bad,) go the gym, warm-up for the show, do the show, shower, and unwind in my hotel room. Eight shows a week is demanding, so I often don’t feel the need to go out and utilize all the energy I need for the show. With that said, fresh out of college, I have also never done eight shows a week before. It’s definitely a test of my stamina, but I’m happy to discover that I absolutely love it. I have something to look forward to doing every single day, especially in a production where our main mission is to scatter joy and in a role I have grown to love so much.

DD: What is your favorite all-time musical soundtrack?