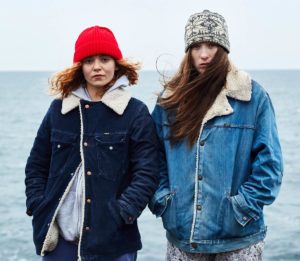 I have a recurring nightmare where I, through completely innocent circumstances, end up locked away in prison for the rest of my life. The specifics of the crime are unclear, but the gist is that I’ve gotten myself involved in something much bigger and more dangerous than I ever could have expected, and now I’m screwed. When I wake up, the feeling of relief is so heavy that it’s almost a pleasure unto itself. I know the source of this anxiety as well as I know my name. Nothing on the planet scares me more than the thought that I have unknowingly set a course of events into action that will ultimately lead to my demise, and that at the present juncture I am cluelessly powerless to stop it. I hope this isn’t the case, and that my life will continue being one of privilege and fun, but there’s always that nagging notion that I’m doomed tugging at my pants leg.

Don’t worry, I have sought treatment for my anxiety.

Blow the Man Down, a sinister little thriller from writer/director duo Bridget Savage Cole and Danielle Krudy taps directly into this fear in telling the story of two young women who, through somewhat less innocent circumstances, find themselves staring down a pretty serious threat to their liberty and well-being.

After their mother passes away, sisters Priscilla and Mary Beth Connolly (Sophie Lowe & Morgan Saylor, respectively) are set to inherit their family’s fish market. Things are tense between them due to some disagreements over said inheritance. On the night of the funeral, Mary Beth decides to drown her sorrows at the local pub. One thing leads to another, and she’s got a dead body on her hands. Priscilla, caring older sister as she is, helps Mary Beth sloppily cover up the crime, but as these things go, the two of them are going to need to pull some strings to stay ahead of the law. With a handful of bumbling cops and a town full of secrets on their tail, the two sisters must put their differences aside and do what’s right. Or at least do what will keep them out of prison.

What follows is a shaggy little thriller that taps into the social/gender politics of small town life that feels adjacent to Blood Simple in the way it uses an ensemble cast to tell a tale of people cluelessly digging themselves into a hole while we watch and cringe. Where this differs from the work of the Coens is in the way that the characters are written. The Coens, even at their most restrained, heighten their players to highlight their flaws. Blow the Man Down takes an opposite approach. Across the board, the characters feel like real people, which adds to the tension we feel on their behalf. Sure, Priscilla and Mary Beth have royally screwed up, but I don’t see how I wouldn’t have screwed up in the exact same way.

Blow the Man Down doesn’t shoot for any stylistic slam dunks, but it does have a handful of touches that make the movie sing. The audio/visual refrain of a group of sailors singing about their troubles while fishing seems like a fun flourish at first, but as the plot develops, it soon becomes a thematic refrain — one which takes new meaning with every revolution. Such is the nature of the film’s script. Not an ounce of fat to slow down its compelling and thematically resonant machinations. When you have such a solid script and a group of committed performers to read it (including June Squibb!), you pretty much can’t go wrong.

Blow the Man Down is an exciting film from a duo of filmmakers who I will surely be watching out for.

Part of the 2019 Philadelphia Film Festival. Scheduled for release on Amazon Prime in late 2019.