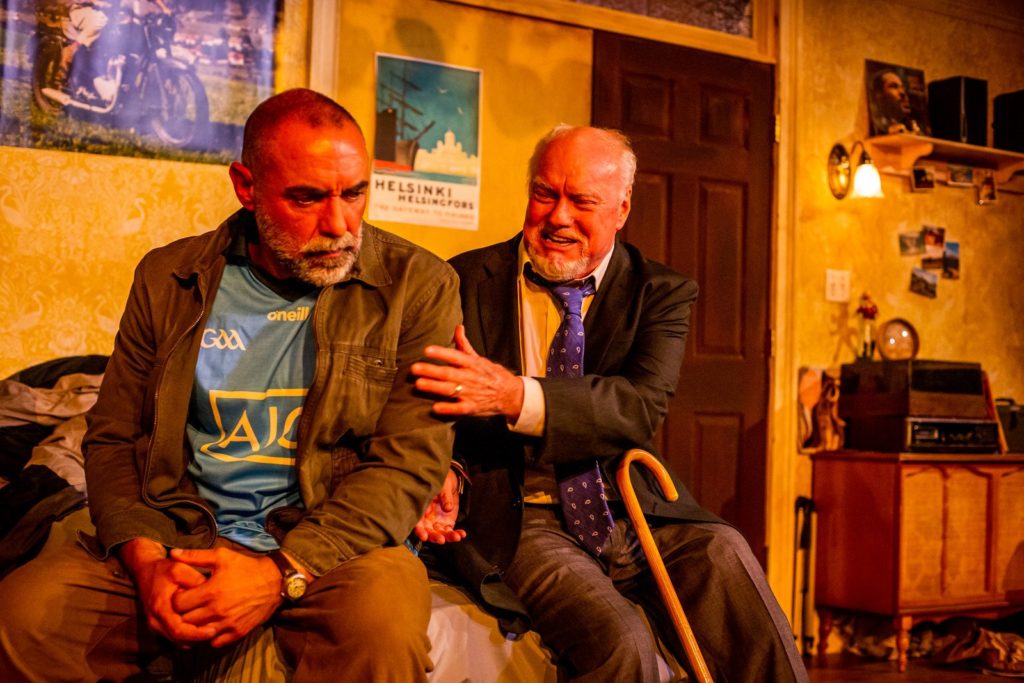 Irish playwright Conor McPherson is best known for spooky dramas like The Weir and Shining City, but his early plays like “Rum and Vodka” and “This Lime Tree Bower,” humorous intertwined monologues about the extraordinary adventures of ordinary folks, reveal a writer in touch with real life—and how scary it can be.

​In his 2013 play The Night Alive—given its Philadelphia premiere by Inis Nua Theatre Company—McPherson reveals a friendship that echoes some great comedic pairings. Tommy, played by Andrew Criss, keeps a watchful eye on his buddy Doc (Mike Dees). Down and out in modern Dublin, snacking on dog biscuits and paying for electricity one pilfered coin at a time (be thankful landlords don’t install coin-operated voltage here!), they eke out a meager living doing odd jobs. Tommy, who lives with his uncle Maurice (Michael P. Toner) and owns a van, employs Doc enough to keep him afloat.

​They’re sort of Laurel and Hardy or Abbott and Costello, with a touch of Vladimir and Estragon and a dash of George and Lennie. Dees makes Doc a surprisingly complex character, when a less exacting actor might be content to portray a witless buffoon. His explanation of his name—short for Brian?—is both hilarious and touching. Tommy, a rudderless divorcee with an estranged teenage daughter, compensates by protecting his friend, the depths of which Criss plays sincerely.

​The Night Alive begins with Tommy bringing home lost, stunned, bloodied young woman Aimee (Minou Pourshariati), hiding her from Maurice and nursing her back to health. One might expect a romance, but McPherson avoids this predictable path, allowing his three aimless characters to almost become a family. Aimee seldom speaks, but Poushariati vividly reveals her growing trust.

​Their bond is threatened when Kenneth (Grant Struble) inevitably finds Aimee. He morfs from doting boyfriend to cruel pimp in a second with explosive violence, staged by Steve Wei with convincing chaos. Though much of this 95-minute play is fun and warm within its bleakness and poverty, Kenneth rips through like a tornado, upending everything.

​The Night Alive launches Inis Nua’s 16th season, and this production in the intimate Louis Bluver Theatre at the Drake shows Reing’s plucky company at their best. You-Shin Chen’s suitably shabby set hints at Maurice’s Edwardian house’s former grandeur and feels more realistic and confining because Chen includes a ceiling. Many sets showing interiors do not, in part because they make lighting more challenging, but designer Abby Schlackman copes well.

​My only reservation about The Night Alive is its final minute, when McPherson betrays what seems to be a melancholy yet cautiously hopeful ending with a twist that feels glib and false. Then again, after all their travails, maybe these characters have earned a little unlikely magic.