The Little Prince captured my imagination from the moment my French teacher played us an LP recording of Saint Exupéry’s book. My classmates and I so loved the sound of the voices on the French record that we memorized passages to recite as comically as possible for each other. Forty years on, when winnowing out my book collection to move into my small Philadelphia apartment, I kept four copies of The Little Prince in various translations.

In spite of my intimate knowledge of the book, Annabelle Lopez Ochoa’s choreographic invention surprised and mesmerized me. Although I would not want to give away what she did with vignettes about art, vision, and how to draw a sheep for a Little Prince, I can say it was vivid, comical, and reflected the book and illustrations so well, it felt perfect.

Matt Saunders’ set of 500 stacked boxes seems sterile when you first look at the stage, but it moves and comes alive. The Pilot crashes through the boxes and pieces of his plane appear in the debris. He lies unconscious after his crash as dancer Stanley Glover slithers his deadly snake-like cane over him as he considers the Pilot’s fate. 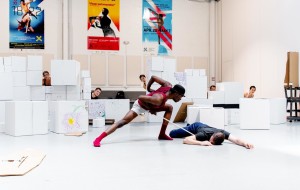 The boxes provide tunnels, exits, and entrances. Some become baobab trees moved around by dancers. They threaten to crowd out the Rose, danced with chimerical grace and poutiness by Francesca Forcella. Her red hat and bright red costume by Danielle Truss stand out in vivid contrast to the pale boxes.

No credit is given in the program to the master of stage management, Jason Pizzi, who, with his team of stagehands, tirelessly repositioned boxes and made sure they would be secure (or fall easily, as needed). Special large boxes were brought in by dancers – sometimes not so unobtrusively. Skyler Lubin’s fearless en pointe performance of the Narcissist on top of two simple boxes was a highlight, and Richard Villaverde’s tippler was also wildly tippy as he tumbled onto and off of his planetary box.

Less successful was the Lamplighter scene because there was too much space used to convey the tiny planet with immediate sunrises and sunsets.

Ochoa Lopez expanded the role of the snake, so Stanley Glover is on stage for a great deal of the ballet. He slithers, dismisses vain and flirtatious roses, takes water from the dehydrated pilot, and releases the Little Prince. Mr. Glover slinks, slides, glides, and undulates from his toes to the top of his head in a rivetingly diabolical performance.

Peter Salem’s music – which he performed on stage behind a half wall of boxes – was mainly melodic – not too harsh, not too loud, and perfectly coordinated with the dance. His performance on electric violin, harmonica and keyboard blended into the pre-recorded sections beautifully – and the brief yet poignant silences were as moving as the music. The sound design worked well, especially the sounds of flocks of wild birds transporting the Prince to various planets. The one puzzling aspect of the soundscape was the use of echoed voices.

The scenes with the Fox, danced lasciviously by Richard Villaverde were delightful in their irreverent animalistic ritual as the Fox shows the Little Prince that what is important in life is not what one sees, but what one feels.

This contemporary ballet of a classic children’s book is immediately understandable for children, but also poignant and thought-provoking for adults. Annabelle Ochoa Lopez has brilliantly animated the Little Prince, capturing so much of the story and illustrations with inventive choreography. BalletX Artistic and Executive Director Christine Cox is to be commended for commissioning this exciting ballet.