I thought I knew Moby-Dick. However, it wasn’t until I saw Kittson O’Neill’s adaptation of Herman Melville’s novel—with a first-class cast at the Hedgerow Theatre, in a production that blew me away and led to an instant standing ovation—that I got a much deeper understanding of Captain Ahab and his crew sailing into the fulfillment of a feverish, nightmarish ambition, ending in disaster—with only one survivor: Ishmael. 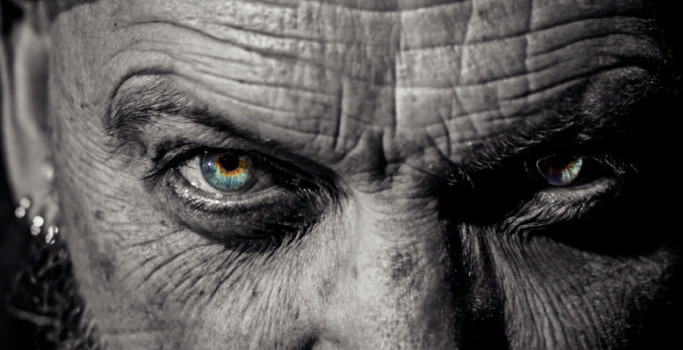 Herman Melville, the novelist (1819 –1891): One of America’s most important writers, “Melville was not financially successful as a writer [. . .] By 1876, all of his books were out of print. He was viewed as a minor figure in American literature in the later years of his life and during the years after his death.”

Moby-Dick, the novel and now the play: Moby-Dick “is sailor Ishmael’s narrative of the obsessive quest of Ahab, captain of the whaling ship Pequod, for revenge on Moby Dick, the white whale.” “Moby-Dick is a profoundly American story. The pursuit of profit is the vessel in which epic vengeance rides” (Kittson O’Neill).

Henrik Eger: Looking at your childhood, what were some of the earliest examples of you acting, generating new scenarios, and growing?

Robert Smythe: When I was in the 4th grade, I volunteered to put on a puppet show for my sister’s third grade class. I had no experience; I hadn’t built any puppets. But I’d read a lot about them and watched a documentary about Jim Henson. When I finally performed after much delay, the other third-grade classes asked me to perform for them, and then the 2nd and 1st grade classrooms. I suppose I got my love of touring then.

I was often selected by teachers to be the lead in classroom performances, though I never understood why. Only later did I find that the lack of support I got from my parents regarding a performing career was due to my father’s parents, my paternal grandparents, having been in vaudeville and basically ignoring him.

When my wife was pregnant with our first child and I was on tour in Ohio, I found myself on a restored vaudeville stage and realized that I was reliving my grandfather’s and father’s life: away from home during the most important parts of creating a family, a home. That was what led to my solo show, When the War is Over. In high school, I was fortunate enough to work with a student three years older than I, Peter Sellars, now known as the enfant terrible of the opera world. But back then we made puppet shows together and I learned a lot—probably more than from any other source.

Henrik: Looking back to your adolescence, those Sturm und Drang days, did you discover some early Ahab moments there? What were they like and how did your family and friends respond to the evolving theater artist?

Robert: My take on Ahab probably owes a lot to my rejection of religion and God when I was about nine years old. Regardless of what Ahab is in the novel, in our play he is a man who takes God to task for not doing His job. Ahab’s reaction to the world stems from this “painful load I bear,” one which he alone is tasked with. His beef is not so much with the whale as it is with the god who let that whale exist.

As a child, though, I was too wrapped up in negotiating my own existence with a mother who (I now know) was mentally ill. I could no more have argued for my beliefs than flown. As far as responses to me as an artist, my family was tired of it and rarely, if ever, saw my work. In fact, they never saw anything I did professionally. So Ahab’s feeling of being alone in the work that drives him is a familiar one.

Henrik: What were the three most important aspects of your life that made you a national figure in the theater world?

Robert: Hmmm. If I agree with the premise of the question, that’s a lot to assert about myself. I’d have to say that the first thing that put me on the map was my show From the Ashes, inspired by creation myth, which featured masks and puppets. It toured all over the world and got a lot of attention.

After that, building up Mum Puppettheatre, a cultural place that was recognized as a peer institution by the other theaters in Philadelphia, even while doing work that was completely different from anything anyone else was doing.

Finally, I think being a passionate iconoclast and maverick earned me a reputation as a person of integrity. A prickly one, perhaps, because I had to fight very hard just for the work to be seriously considered at all and then be judged for its content and worth. I’m pretty proud, though, that by the time Mum closed, people had accepted puppetry as a valid theatrical form (in Philadelphia, at least), instead of a carnival oddity—only suitable for children.

Henrik: Some of my friends are concerned about toxic masculinity in our time. Could you address toxic masculinity and the human side of men in this production, including, of course, Ahab—the man with a mission in the Moby-Dick production at the Hedgerow—apart from the play’s literary and dramatic value?

Robert: I think there’s actually very little in Moby-Dick that could be considered “toxic masculinity,” and I say that as a person who has paid a lot of attention to this topic for the past two years as I work on a cabaret show on that subject.

As you say, the people in Moby-Dick (and the actors who play them, who include a non-binary actor) are first and foremost human. They are greedy. They are lonely. They are working hard at the tasks at hand to try to improve their lives. No one [on the ship] holds anyone else up to impossible ideals based on gender—although there is ageism.

People are judged on the basis of their abilities, not their bragging. Only those who can back up their claims are on the ship; only those who can do the work are tolerated. There’s no need to prove anything or pretend to be anyone else. And perhaps that is the secret to how some view Ahab: he doesn’t waste time posing as something he’s not. What you see is what he is—unfiltered. Ahab doesn’t hide behind the pasteboard masks he sees many people wear. He detests them.

At least, that’s how I play him.

One Reply to ““Passionate iconoclast and maverick”: Interview with Robert Smythe, Ahab in Hedgerow’s MOBY-DICK”