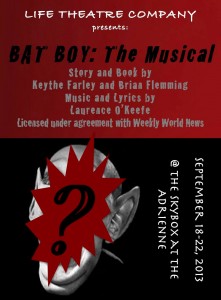 Weekly World News is known for a lot of things, but heartfelt sentiment isn’t one of them. Surprising, then, that the tabloid birthed BAT BOY: THE MUSICAL, an honest-to-goodness tearjerker of a play.  Life Theater Company, which formed in 2011 to explore the emotional textures of the human condition, stretches a bit further to give us the experience of this iconic half-human, half-bat. Adam Hoyak portrays the title character with an intense physicality, nicely tempered by an unfolding heart and a growing intellect. He’s alternately horrifying, hilarious, and heartbreaking.

The supporting cast matches his level of commitment. It’s a pleasure to watch them, every single one of them. They go for big star turns when appropriate, but they also skillfully turn their performances down a few notches when the focus is on another actor. As long as they’re on stage, each is doing something worth watching. Much of this is due to Zoi Gianneas’ sure-footed direction (musical numbers featuring the whole cast are precise and electric), but the acting talent on display is uniformly excellent. Special mentions go to Melissa Bird, who knocks it out of the park as a traditional mom and homemaker and never reverts to kitschy 50s camp, and to Amanda Jill Robinson, who turned in a side-splitting performance for every character she played. The show has room for improvement (the villains need to be more villainous, and major emotional turns need to be sharpened), but it’s the difference between an A and an A+.  [Skybox at the Adrienne] September 18-22, 2013. http://fringearts.ticketleap.com/bat-boy-the-musical.