The Philadelphia Orchestra has  amazing programs that mark a streak through the history of music and art across time. Music director, Yannik Nezet-Séguin delivers a tasting of unusual nuances by drawing together themes, visuals, and melodic personalities. Last week’s program was a dynamic mix of daring moments. Unexpected changes in the music kept the audience focused on the movement through different genres. Joshua Weilerstein steps in last minute to conduct his favorite contemporary composition, Ent’acte by Caroline Shaw. A creative relationship flourished in the composing of the next piece from 1786, Carla Maria Von Weber’s Clarinet Concerto No. 2. The orchestra finished with a sculptural post war declaration for peace in Brahms, Symphony No. 3

The first piece, Entr ‘acte by Caroline Shaw was foam to top the evening off. Delicate bows danced as the conductor whirled around to sweep more gusto into the quiet minuet. Caroline Shaw is a contemporary musician, composer, and producer at NYU working with singers, such as Nas and Kenye West. The sound from the violins vibrated in a harmony that united a precarious echo with only a tap of the bow. It mimicked the scratching of a vinyl. The long stretch of string section combined with flute, and finally with a cello solo drove an acute sound from this outstanding orchestra. It was relaxing to follow a nexus of sound turn into a perfect harmony.

The flavor of the next piece, Weber’s Clarinet Concerto No. 2, played to a different key and worked in the personality of the piece perfectly with the principal clarinetist, Ricardo Morales. The clarinet peeks in the music in ways that influence the tempo. Melody is lost in the solo of Morale’s performance. The clarinet played unconstrained and brought the orchestra to a new low after hitting a high key. The jazzy form that left the orchestra in our memory took hold of our anticipation for repeated nuances of high’s and lows. The pattern of the flow of intertwined clarinet solos opened the space and ends with what seemed to be the height of our imagination. The encore,”Calypso Serenade” from Morton Gould’s Benny’s Gig, by Morales and Harold Robinson reimagined a jazz bar, like that of the Clef Club. A dark night club when unexpectedly an old friend whm used to play music together come together to make the evening a magical night. 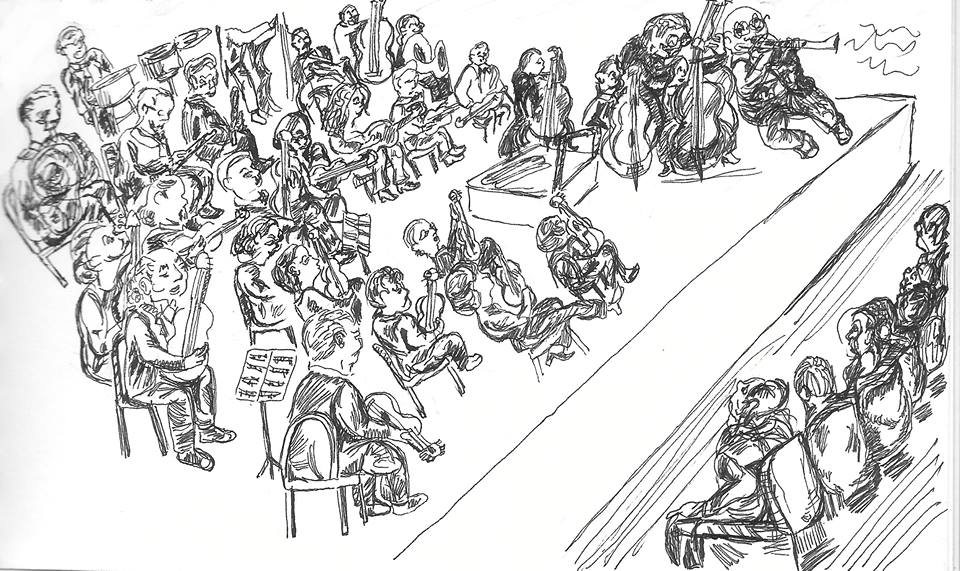 Ending with Brahm’s Symphony No.3 we are taken by the music again in the themes of peace and war. Activating the monument of a German monument in movement around the base of the monument realizes the visuals of World War I. The destruction of national identities and the merging of allies began to resonate with the descendance and regenerative emotions. The trans in the music motivated the “cyclic” movements of German insurgence. The tension of peace and war romanticized the devastation while feeling God and humanity monumentalized the pastoral dream of a better world. The change of pace of the symphony reminds us of the borders crossed and the rewards of pushing forward in the hope of returning to a moral lesson in the nature of our being.