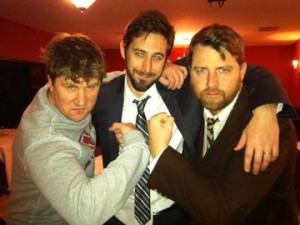 It’s a shame theater and sports don’t intersect more often. The goings-on of the four major professional sports—especially in Philadelphia—never fail to provide fans with a rollicking mixture of tragedy and farce, not to mention suspense and high stakes. Those of us who grew up in the City of Brotherly Futility have come to realize over the years (particularly the years between 1983 and 2008) that the sporting world is as ridiculous, random, heartbreaking and exhilarating as life itself. Oh, and hilarious. In Philadelphia, sports are often pretty darn hilarious.

THE TOOLS OF IGNORANCE PRESENT: HIGH CHEESE is a sketch comedy show put together by Philly comics Johnny Goodtimes, Chip Chantry and Carl Boccuti. Playing on the inherent silliness of sports fandom–focusing mostly on 2013’s lovable-ish losers, the Phillies–the sketches of HIGH CHEESE riff on such inside jokes as the rough image of Philly sports fans, the persistent bad luck of our hometown athletes, and classic baseball lore (Bartman!). The show’s centerpiece is a sketch lampooning the awful little league team for which Goodtimes played in 1983. The details that Goodtimes recalls are both hilarious and true to life. The evening is capped off with an appearance by Fastball Pitcher Bob Gutierrez, a character created and portrayed by comedian Brian Craig. Words can’t capture the aura of this lost Chicago Cubs great; all that’s important is that I laughed so hard I cried. Only one performance remains of HIGH CHEESE, so get your tickets now. If you’ve ever walked the beer-soaked corridors of the Vet, you won’t want to miss this one. [The Adobe Café] September 14-20, 2013, fringearts.ticketleap.com/high-cheese