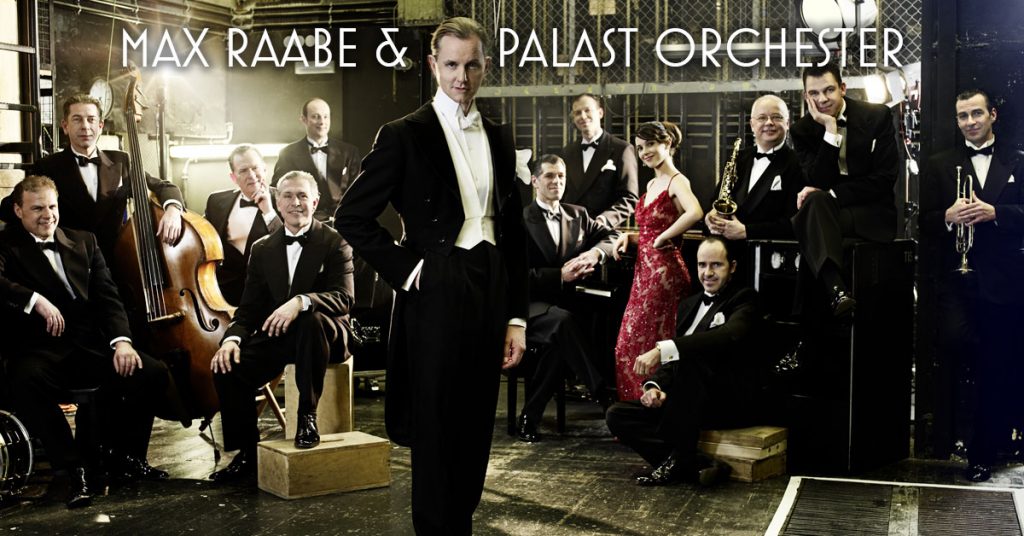 Max Raabe, one of Germany’s most popular singers, performs with his band, the Palast Orchester, in capitals around the world, including Tokyo, Paris, and Tel Aviv, where audiences delight to his wide range of dance songs from the 1920s and 1930s. He sings not only in German, but in English, French, Spanish, and Italian. His repertoire also includes more contemporary music by artists like Prince and Freddie Mercury, as well as his own compositions. Raabe revitalizes old songs, blending various genres into one coherent show with timeless elegance and wit.

Raabe’s band opens its North American tour tonight in Red Bank, NJ, and comes to the Philadelphia area on April 13th for a performance at Longwood Gardens.

Henrik Eger: You were born in Lünen, West Germany, in 1962, a tumultuous year: the Beatles produced their first single; Marilyn Monroe, shortly after her famous performance of “Happy Birthday, Mr. President,” passed away suddenly; and the first American astronaut flew into space.  Did any of these world events have any impact on your life growing up?

Max Raabe: I spent my childhood living in the country, in a calm and peaceful atmosphere. Of course, Marilyn Monroe and the Beatles were talked about, but neither my parents nor I had anything to do with the organization of the first Astronaut flying into space.

Henrik: What were some of your first memories during your youth that connected you to music and acting?

Max: I was a typical kid who played outside most of the time and did sports in clubs. However, music was played a lot in the circles I grew up in. As a child I was glued to the radio when a certain program came on that featured music from shellac records. If I couldn´t be home, I asked some people to record it for me. They would use a microphone from one of those old tape recorders, so I always heard background noises, like those of my mother working in the kitchen. In my home town, I soon started performing songs of this era for the boy scouts or small events at church, dressed in a black suit, wearing the top hat my father wore for his wedding. Also, I used to watch black and white films that were shown on Sunday TV and which often featured large orchestras like the Palast Orchester.

Henrik: You became famous worldwide for bringing back to life the sound of German and American dance and film music of the 1920s and 1930s. How did that fascination with music of days gone by evolve?

Max: One day, I discovered a shellac record in the record cabinet of my parents. One of the songs was “I´m Crazy About Hilde,” a funny instrumental piece that had something melancholic about it, which attracted me. Then I began collecting shellac records, which I bought from the flea market in Münster. I played them on my parents´ record player which could be adjusted to 78 rpm.

Henrik: In one of your interviews, you describe the period in Germany with people like Marlene Dietrich, Albert Einstein, and Bertolt Brecht—all of whom fled to the U.S. when the Nazis took over in 1933—a time of one disaster after another, but with music and shows that tried to cheer people up. In what ways do you connect with the zeitgeist of those days and the turbulence in our own time through your shows?

Max: The music we perform was often written by musicians with a classical background. In spite of the times, the songs were light and elegant, and technically absolutely brilliant. We take the music very seriously, approach it as if it were composed by Brahms or Beethoven, and put thought into every note.

Today, the music and the lyrics have the same power as when they were composed; people laugh spontaneously as they did in those days. The songs are timeless; one does not require historic knowledge to enjoy them. Mostly the compositions are apolitical, which of course is part of pop music up to this day. Lady Gaga does not bore us either with political statements.

The music of the ‘20s and ‘30s was written to tear audiences out of reality, away from their troubles and sorrows for the period of a concert. That is also our approach.

Henrik: You communicate with your audience in unusual ways, often using singing and stage techniques, including your stylized entries, that haven’t been seen or heard since the era the songs were first performed.

Max: I like to present the lyrics with ease, but at the same time it is vital that they are clearly understood. To achieve this, it helps to choose a mixture of half spoken and sung words. During my studies, much emphasis was laid on text intelligibility. My aim is to transport the lyrics and not to bother the audience with my feelings.

Henrik: You always wear formal attire on stage and never break character, presenting deadpan statements so witty that audiences can’t help but laugh. How tempting is it for you to stay in that mode at receptions afterwards or in interviews?

Max: Actually, this is very much the way I am, part of my personality. I only break with this behavior if I get furious, which, thank God hardly happens—and never on stage or in a professional context.

Henrik: You studied music at the Berlin University of the Arts, ready to become a baritone opera singer. But then you changed gears, and, together with eleven fellow music students, formed the Palast Orchester in the mid-80s. What led to you giving up your operatic aspirations?

Max: We got together as a group of students to play ‘20s music which we loved, and to earn a little pocket money next to our studies. We soon discovered, however, that people really enjoyed what we were doing and so slowly, year by year, we found ourselves performing more and more. By the time I finished my singing training, I was relatively well-known, and things were going so well with the Palast Orchester that we realized what a gem we had and eventually needed to turn professional.

Henrik: You had hardly any money or access to music from the 1920s and ‘30s. Yet, you persevered. Tell us more about it and the vision you had for your fledgling orchestra.

Max: We found the first arrangements at flea markets and in attics. The only vision we had was to play those wonderful arrangements as well as we could and, if possible, in the original sound: the typical vibrato of the sax section, trumpets with a gentle mellifluousness, a lilting rhythm section and the melody lines of the violin hovering above everything like a butterfly. We want to thrill the audience with the contrasts that lie in these colorful arrangements—from slight and gentle to big and full.

Henrik: Apparently, you and your musician friends spent over a year rehearsing those old and rarely performed songs. And then, something extraordinary happened one night in 1987, which changed your life and put you and the new orchestra in Berlin on the cultural map.

Max: True.We had been rehearsing for over a year and were offered the unique opportunity to perform at the yearly theater ball in Berlin. Our stage was in the lobby, so people had to pass us to get into the main hall. However, to our astonishment, they all stopped to listen to our music; people even came back from the main hall. At the time, our repertoire was fairly small and we eventually reached the last song, but the audience was cheering for more, so we wound up repeating the songs we had already played. Looking back, this was a pivotal event. Had it not happened, I am sure we would have broken up.

Henrik: 1992 saw another major breakthrough for you with a satirical song you had written—”Kein Schwein ruft mich an” (“No swine gives me a call”)—a pop song in the style of the 1920s. It spread your name all over Germany. What impact did this success have on your writing more original songs?

Max: Yes, “Kein Schwein ruft mich an” was an important song in our career. What was so special about it was that in those days one didn´t use swear words on stage, like calling someone a “swine”—let alone doing so while being dressed in a tuxedo.

The other thing was that I used the old-fashioned sound of the 1920s but wrote about a modern topic—the story centers around an answering machine. I followed this concept for a while, writing songs for instance about mad cow disease and cloning. We only performed those in Germany, however, because, of course, it was important to understand the lyrics.

Henrik: Your shows also include covers of artists like Tom Jones, Britney Spears, and Salt ‘N Pepa, all done in the style of the ‘20s. How did those singers and composers respond to your reinterpretations?

Henrik: You’ve actually appeared as a period singer and entertainer in various movies by German directors, including Werner Herzog’s Invincible.

Max: It was a great honor and interesting being in an actor´s environment. I like Werner Herzog´s films a lot, in particular those with Klaus Kinski. It was exciting watching Herzog at work.

Henrik: You gave your first U.S. performance in 2004. How did American audiences and critics respond to you and your music?

Max: We play international music that is loved everywhere. In the 1920s, European musicians were attracted to jazz [and] listened intensely to American records. Jazz again was influenced by classical European music. In a way, we play a modern form of classical music—don´t forget that in Mozart´s days, they used to dance to his music. Our music is a positive example of globalization.

Henrik: Max, would you be willing to reveal something with us that only your best friends know about you?

Max: There is one situation in daily life in which I have absolutely no humor: behind the steering wheel of my car! I am very tolerant toward those who make use of their turn signal. But if they don’t, I take it personally, find them rude, and become extremely narrow-minded. Sometimes, I even yell out my anger, but then, three minutes later, I try to analyze how I can prevent this situation from occurring again. At least I´m aware of this abyss in my personality.

Max: We are greatly looking forward to our tour in the USA and Canada!

2 Replies to ““I Can’t Kiss Myself Alone”: The Wit and Retro Style of Berlin’s Max Raabe and His Palast Orchestra. Interview by Henrik Eger”