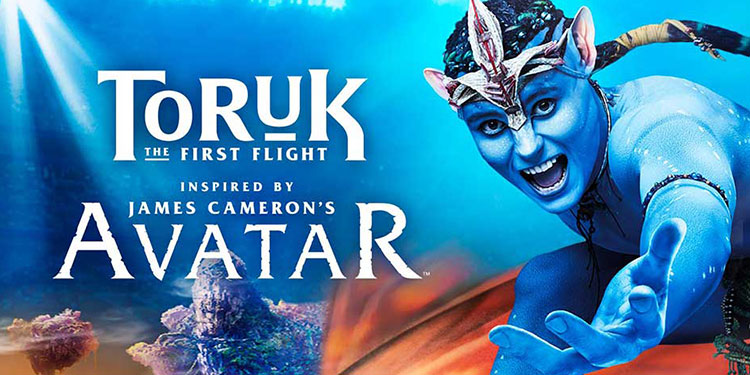 The moment the audience enters the Wells Fargo Center with their favorite game food (Chickie and Pete’s crab fries and chicken fingers), their journey to another planet begins. This is nothing like the stadium of game days. Stars and fireflies flicker in the darkness of the night. Mystic sounds of Pandora echo, like water dropping or something popping.  As anticipation rises, the Na’vi storyteller (played by Raymond O’Neil) appears on a rock and begins narrating a folklore of three young Na’vi in the ancient era.

Cirque du Soliel’s TORUK- THE FIRST FLIGHT is based on James Cameron’s blockbuster movie, Avatar. The awe-inspiring world of the blue skinned Na’vi and their planet of Pandora are recreated on the stage by multimedia stage directors Michel Lemieux and Victor Pilon.

Unlike sets that just sit on the stage with no movements or little changes, the stage of TORUK is itself alive. With 40 video projections on a 20,000 square foot stage, Cirque du Soleil’s signatory visual technology creates spectacular sceneries of Pandora: a mystic jungle, a magnificent rocky mountain and falls, an ocean, a river, a desert where the two young Na’vi boys and a girl travel around for a search of talismans to save the sacred tree.

Music directors Bob & Bill composed a whole new soundtrack for the show to take the audience to a wildly realistic fantasy world. The team dragged their instruments and equipments out in the woods to record the beat for the shows and sampled rhythmic patterns using natural objects such as footsteps on dry leaves or a stick hitting the trunk of a tree, to make the sounds as organic and natural as possible. A live performance of singer Priscilia Le Foll, who plays a Shaman who guides the story along with the Storyteller, cradles the viewer like a wave of the ocean.

The world class performers of Cirque du Soleil are costumed as Na’vi with blue skins and tails or Spirits of Eywa as puppeteers of creatures such as Viperwolves. Their performance evokes constant repeats of wow and oh-my-gosh.

Just like Na’vi in the movie—which of course made heavy use of visual effects—the performers tumble on the stage, jump inhumanly high, flip back and forth in the air, fly in the air on just a rope or silk strips. It captures the movie’s movements of the creatures on the planet with different gravity. A variety of circus arts are performed to show the totally different physicality of Na’vi and also unique characters of five clans, which makes the story more realistic and convincing.

Every aspect of TORUK is simply breathtaking and astonishing. That’s the case with other popular Cirque du Soleil shows, but this could be one of their best shows. The cutting-edge visual technologies, the talented performers, the costumes and the makeup  the installations, and the puppets are supported by dense and deep imaginations. It is a show of unbelievably real fantasy, of courage and adventure that inspires and encourages anyone who experiences it.