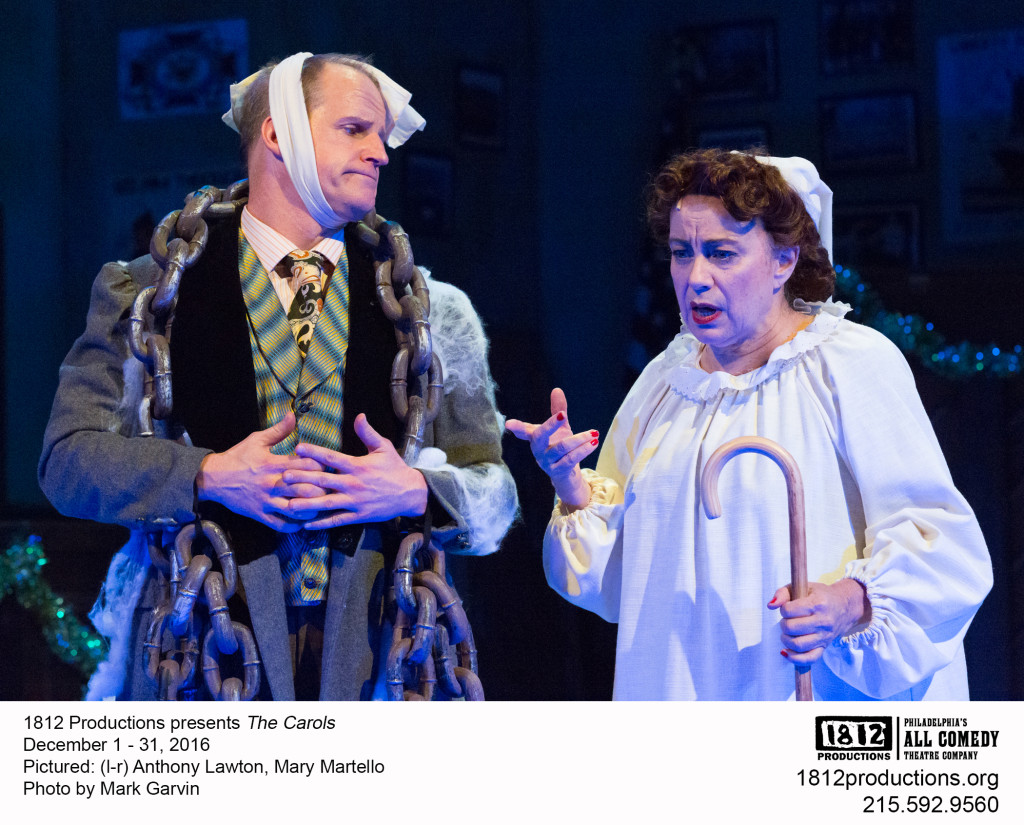 Watching dated and corny but also comforting old movies like It’s a Wonderful Life, White Christmas and Miracle on 34th Street is a holiday tradition for many.

1812 Productions’ THE CAROLS is a live local mounting of that kind of old-fashioned holiday story. It’s a new musical comedy about three sisters (surname: Carol) who decide to put on the local VFW post’s annual production of Dickens’ A Christmas Carol despite the wartime death or absence of all of the former male cast members and the bah-humbugism/clinical depression of VFW matron Betty Bell (Mary Martello).

For the most part, THE CAROLS shares the pleasures and problems of its old holiday movie kin. The problems include unabashed sentiment (especially during sister Lily’s ((Rachel Camp)) narrative monologues) and datedness/caricature that borders on offense when it comes to the character of Mel (Anthony Lawton), the Borsch Belt comic who answers the girls’ A Christmas Carol audition call. On the other hand, this is probably how a Midwest-set Hollywood movie of the 40s would have portrayed this kind of a Jewish character. And there’s no doubt that THE CAROLS comes to comic life with his entrance.

The Carols also has a few logical lapses that might be expected of a show written (by 1812 artistic director Jennifer Childs, who also directs) to meet a holiday deadline. The scene where the girls inexplicably emerge from their gift-box costumes dressed in red, white and blue is one example that is redeemed with a big laugh when Miss Betty asks, “What does that got to do with anything?”

THE CAROLS’ pleasures include unabashed sentiment (this is Christmastime after all), and great acting, singing (of Monica Stephenson’s often catchy original tunes) and dancing. Only a Scrooge would not enjoy Lily and Mel’sWhite Christmas-reminiscent tap duet. The Carols also delivers some wonderful Christmas presents all its own, especially in the form of gags: I can’t remember a moment in any classic holiday movie as funny as the one when Miss Betty (playing Scrooge in THE CAROLS’ A Christmas Carol play-within-a-play) and Mel (as Jacob Marley) shuffle-chase each other around the stage to the Carol girls’ calypso rhythms. A few minutes later these two acting pros manage to mine 21st-century laughs out of the 100-year-old Who’s-on-First vaudeville routine.

THE CAROLS is probably not good enough a play to live on through many Christmas futures in the manner of a classic holiday movie. But it is a great entertainment present for Philly’s Christmas present.