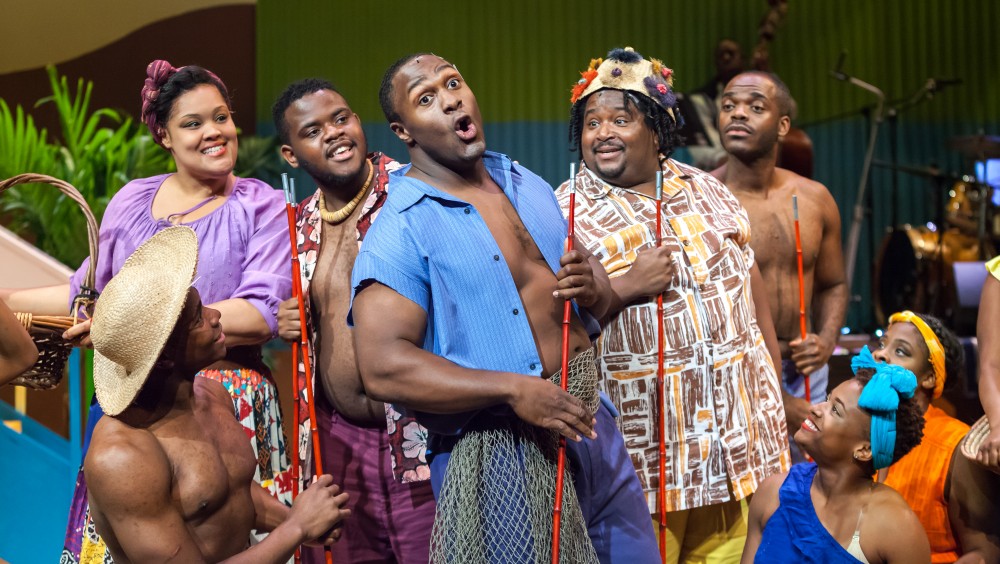 New Freedom Theatre in North Philadelphia is dedicated to presenting productions that illuminate the multifaceted African American experience. Their current production, JAMAICA, is based on a musical that opened on Broadway in 1957. Let’s step back in time for a moment: Even back then the musical was no longer the satiric activist piece its creators E.Y. (Yip) Harburg and Fred Saidy, along with Harold Arlen had intended. Their work was mauled by producer David Merrick, who threw Harburg and Saidy out and then strong-armed their work into a different kind of thing. JAMAICA became a song & dance revue, a leftover from a more complex plot line— and a Lena Horne vehicle. Lyricist Yip Harburg refused to attend the opening on Halloween in 1957.

If Freedom Theatre had wanted to present something closer to the creators’ lost original they would have had to commission a retro-script adaptation. In any case, they chose to more or less play it as it lays. There’s less focus on message in this musical revue format – although clever songs address commercialism, recall the Cold War, and spoof evolution and self-important functionaries. The focus is more on showing the audience a good old time. It’s a huge undertaking to mount a show full of production numbers, and the greatest strength of this New Freedom Theatre musical lies in its energy, high octane dancers, and choreography that won’t quit.

The bright, colorful and appealing stage set (Smallwood/Maharaj/Hobson) includes a house of many colors and tropical potted palms, but not too many, because much space is needed for performance. Beneath the balmy surface of this story about island people, the steely discipline of the entire cast of 16 makes the whole thing work. It’s a credit to director/choreographer Rajendra Ramoon Maharaj, the cast, skilled on-stage musicians and the production team that it moves like clockwork while looking easy.

Sweet Savannah (Annesa Neibauer), actually kind of a spitfire, dreams of another island, Manhattan. She isn’t so much in love with her handsome island fisherman (Shabazz Green) that she wouldn’t consider leaving for New York with newly arrived Mr. Nashua (Walter Deshields), a slick speculator and possible Romeo. La Tasha Morris’s outsize performance as red hot mama Ginger is matched by outrageously comic Reji Woods as Cicero, her counterpart. Deborah Billups as Grandma is the real torch singer here. Courtney Mitchell, going into 7th grade, handles his big role as Quico like an old pro. The kid’s got poise.

Interesting changes have been made to the original song list. For instance, a Jamaican folksong, “Brown Girl in de Ring”, has been added. And “What Did Noah Do (When the Big Wind Came?)” has lyrics by Harburg, but was not in the original JAMAICA. Songs have been shifted, and one has been removed. Where the original B’way show had one reprise of the song, “Savannah” at the end, New Freedom’s production reprises it five times. Yet, oddly, while four other songs are reprised at the end, “Savannah” is not.  There’s lots of good fun here. Still, at almost three hours including intermission, this show feels long. Losing several reprises would lift excess weight.

The best part is the inspired, threatening hurricane scene with its whirling movement, driving beat and dramatic lighting (music composed by Paul Wilt, lighting by Andrew Cowles, sound by Douglas Horvat). Where other scenes come across more measured and choreographed, even if beautifully so, the A High Wind in Jamaica scene sweeps careful structures away with its frenzied dances and acrobatics. Although as tightly choreographed as the rest, it seems so free and wild it almost takes your breath away.