Side man – “a supporting musician in a jazz or rock band”.  Slang: person who follows without power or is extraneous, irrelevant; “soggy”. 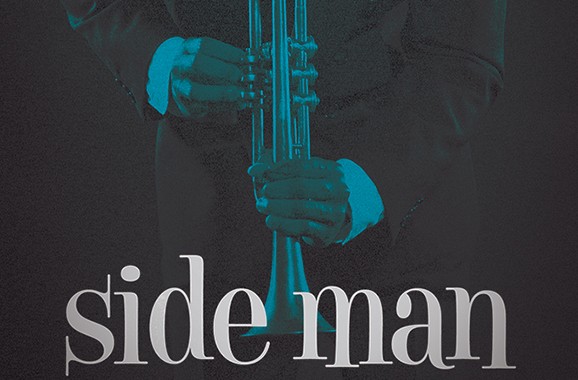 Warren Leight’s retrospective play SIDE MAN, fastidiously directed by Dennis Bloh, brings to light dusky, smoked filled jazz clubs, youthful dreams, family nightmares, camaraderie and the all consuming love of music. Sitting in the intimate Second Stage venue at Players Club of Swarthmore, close to the exquisitely detailed set (Ellen Wilson Dilks, Jim Fryer), with it’s flexible array of club, bandstand and New York City apartment settings, surrounded by the sultry sounds of horn instruments, evokes the feeling that you have truly been transported to the era of live jazz.

Leigh’s semi autobiographical drama stemming from his own family experiences with his musician father, are related through the character Clifford (Aaron Roberge), who both narrates and interacts in flashback scenes ranging from 1953 to 1985. Clifford was named after Clifford Brown, a legendary jazz trumpet player.  His parents are married, unhappily, because of him, and this karma follows Clifford throughout his life as he becomes increasingly burdened by familial monetary and emotional responsibilities that should belong to his father Gene (Jeff Ragan), a trumpet playing side man. Gene is never really present within the family; his being is intertwined with his trumpet, wherever the next gig might lead, leaving Clifford to care for his mother Terry (Lorraine Barrett), who has immersed herself intricately in alcohol.  There is also much more color than the “blues” that meets the senses in this tenderly presented story, as it is highlighted with many bright, perky, comical notes, most notably in the band scenes.

The band, consisting of Al, handsomely portrayed by Charles Hoffman; Ziggy, a wise guy with a stutter, excellently wrought by Jim Fryer; Jonesy, imbued with depth and warmth by T.J. Deluca, and Gene, convincingly honed by Jeff Ragan, manages to wonderfully manifest a group musicians so tightly knit that they can finish each others flourishes, and sentences.

Aaron Roberge plays Clifford with touching sincerity, even when silently watching a scene ensure on the stage his facial expressions speak volumes of emotion, and Patsy is played with panache Heather Plank. Lorraine Barrett breaks loose in her thoroughly enlivening personification of Terry, as she powerfully expresses the pain her character feels being married for 30 years to a man she feels has passively pushed her to the side, and made her think she is crazy.  These actors are well rehearsed, spot on in their respective characters, and in respect to each other’s characters.