LAFFERTY’S WAKE is one of the most successful plays at the Society Hill Playhouse, year after year. The present production features a delightful cast that intrigues and charms audiences who always get invited to participate in the hilarious, James Joyce-inspired wake (with Guinness and other beers served at the bar). 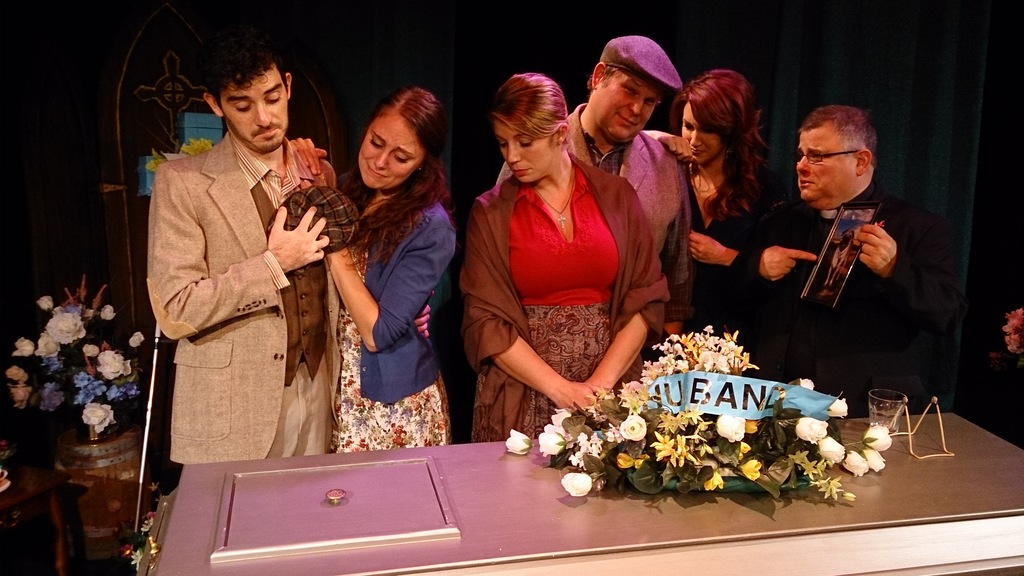 Henrik Eger: You started your creative life as an actor in Philadelphia.

Susan Turlish: I pretty much grew up at Society Hill Playhouse. I was bitten by the acting bug and I could not stay away from the Playhouse. I think my first play was The Chinese Wall by Max Frisch. My friend Kathy and I—we must have been 14-15 years old—were “walk-ons” in that show. I think we drove a lot of the adult actors crazy, but each night was magic for me. From then on my involvement just increased.

During my years at Temple, where I studied History—not Theatre—I appeared in Marat/Sade as Charlotte Corday, and Electra in The Flies by Jean Paul Sartre. I also played the Girl in The Knack by Ann Jellicoe, Clare in The Maids by Jean Genet, Estelle in No Exit by Sartre, Grusha in Brecht’s Caucasian Chalk Circle, and Girl #4 in Picasso’s Four Little Girls. In addition there were featured roles in Kennedy’s Children, The Shadow Box, The Hostage, An Evening with Richard Nixon, The Screens, and The Good Woman of Setzuan. The final show I performed in on the Main Stage at the Playhouse was The Day Mary Shelley Met Charlotte Bronte by Eduardo Manet. Deen [Kogan] played Mary, and I played Charlotte.

Henrik Eger: How did you transition from the role of an actor to a writer for the stage?

Turlish: That all began with my work on The Philadelphia Youth Theatre. That first summer I worked on an adaptation of the short story by James Joyce called “Araby.” The following summer, we received a grant from the National Endowment for the Arts, which funded two weeks of free performances of a youth version of Shakespeare’s Julius Caesar. I also worked up an adaptation of Orwell’s Animal Farm during the Watergate summer, which was pretty funny.

Some of the plays were wonderful, including original pieces that I developed: Robin Good Hood, Cinderella ’65, Petey and The Wolf, Growing Up, Barbie Dream Opera, and A Safe Place. I adapted and directed Beckett’s Waiting for Godot—with thirty young actors waiting for Godot on a street corner.

Eger: Tell us more about the evolution of the Philadelphia Youth Theatre.

Turlish: This was a project that Deen and Jay [Kogan] initiated at the Playhouse after their visit to Great Britain’s National Youth Theatre. The project began as a summer program in 1970. The structure was pretty simple: workshops and classes in all aspects of theatre for young adults, ranging in age from 15 to 19. In 1974, the Philadelphia Youth Theatre became part of the Philadelphia School System as an Alternative Program—cosponsored by the Society Hill Playhouse from then until 1996. Students were recruited from high schools throughout the city and received academic credit for their work at the Playhouse, which involved classes, workshops, and the primary thrust of play development and production for student audiences in a professional theatre setting.

Eger: I tip my hat to all of you, but how are you connected to Irish culture?

Turlish: Well, I’m part Irish on my mother’s side. Collins was the name. Hers was a large family: three boys and three girls. Very close. Got together every Friday night to chat, drink, eat, sing, and tell stories. As kids, we couldn’t get enough of the conversation, especially when they talked about their father, who was a bit of a mystic . . . saw things, was born with the “veil”—just like Charlie Lafferty. About a year before the Lafferty project began or was even mentioned, I took a class in Irish History at Temple just for something to do. It certainly came in handy. Also, Deen and Jay loved doing the Irish playwrights: Behan, Friel, Binchey, etc.

Eger: How did you and Deen Kogan come up with the idea for LAFFERTY’S WAKE?

Turlish: The Lafferty Project began when Deen suggested I develop an interactive Irish Wake for the small, downstairs theatre. She had visited Chicago for a book convention. While she was there, she saw a show called Flanagan’s Wake. She thought it was a good idea, but it could be more fun. I developed a list of characters: the priest, the widow, the daughter, etc. We held an audition, which brought [together] an interesting group of people—just about all of Irish descent. Then work really began.

Eger: How did you develop the play, making the dead come alive?

Turlish: I asked the actors to develop character biographies. The notion of holding the ‘wake’ in a funeral home was just too depressing, so we opted for the pub. What fun! Charlie’s home away from home. I knew Irish wakes could be crazy affairs, but couldn’t verify that until I discovered a book called Irish Wake Amusements by Seán Ó Súilleabháin. It’s a scholarly work, but it helped reinforce my thinking about the structure of Lafferty’s Wake. There had to be conflict, thus the introduction of the mistress at the end of Act 1, but could we allow the Mistress and the Widow to do battle? Absolutely. For, according to Mr. Ó Súilleabháin, no Irish Wake is considered a success without one mighty, knockdown, knockout fight!

Turlish: I wanted to integrate as much of Irish culture and literature into the show as possible. I loved having Molly Greaney doing the Molly Bloom speech from Ulysses and getting so many of the words wrong as she drunkenly goes on and on. Her “yes, yes” contrasts with Kathleen’s “no, no.” Charlie’s veil and mystic nature may be influenced by my maternal grandfather, but I also thought of W.B. Yeats and his enchantment with the faeries and the little people and the life beyond this one. Charlie’s FBI speech in Act 1 is a nod to Brendan Behan, as is the name of his town: Ballyslattery. I loved using the Irish blessings and curses, especially the curses—my favorite being: “The curse of Cromwell on you!” (That’s Oliver Cromwell, not Thomas.)  And then we have the religious strain, such a strain, of Catholic and Protestant.

Eger: You spoke highly of the original cast.

Turlish: Very much so. Our original company of actors was fantastic and contributed so much to the development of this show: Kimberly Rehfus (Kathleen), Sean McGrath (Rory), Michael Wescott (Father), Lisa Timmons (Maggie), Jeremy Chacon (Patrick), Peggy Smith (Molly), and Greg Gillespie/Dennis Gildea (alternating in the role of Lafferty).