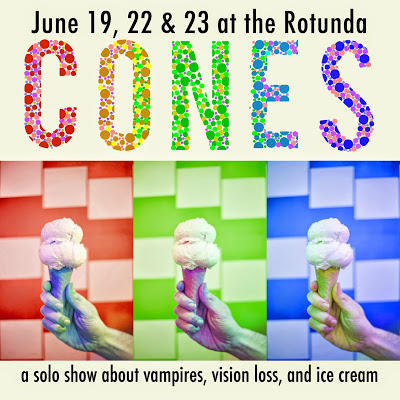 Across the space of several years, Morgan Fitzpatrick Andrews—author and solo performer of Medium Theatre Company’s CONES—has become ‘West Philly famous’ to me. I noticed that Morgan occasionally squints his eyes, but I had no idea that Morgan has impaired vision—a fact that is the primary focus of his latest artistic effort, a show about vampires, vision loss, and ice cream. Many mechanisms are used to explore these topics: the program becomes a cone-shaped party hat, we are offered free drinks in paper beverage cones, and most memorable of all, it closes with free ice cream cones by Little Baby’s. Through all these means and media, CONES discussed issues of ability vs. disability, the choice of whether to “pass” (hide one’s own physical challenges), social pity, and more.

CONES opens with Andrews in a pair of tight white underpants walking across the stage blindfolded carrying a road cone. This object is placed on the stage, and then a trunk and clothing rack are added. As the play unfolds, the audience is welcomed to participate by selecting clothing items for the actor to wear for his “day”. Like an optometrist’s exam, Andrews holds up shirts, calling out “Which is better–number one, or number two?”, until the wildest shirts are finally chosen and worn for the remainder of the play. During the show, he shares his experiences growing up in a small apartment occupied largely by a couch, television and his mother. His parents were separated and, naturally, that this was distressing to him. By way of introducing vision loss, he tells how during those childhood years he would watch Mr. Magoo and, though he hated the cartoon (and its reliance upon a single unfunny plot line revolving around sight impairment), it was the only cartoon available at 6am, so he endured it.

Andrews is a great story teller. He takes his dramatic experience and morphs it into a humorous situation, thereby making it less scary and more accessible to an audience, and probably easier for him to talk about as well. For example, Andrews allowed (or tricked?) the audience to select a vampire cape for him to wear (this, instead of pants)—and then transforms himself into Dr. ‘Macula’ (Dracula) as his childhood optometrist. Dr. Macula turns out to be a reasonably friendly (or at least well-meaning) vampire who will explain Andrews’s very real and pathological vision loss for the audience. A touching/telling moment in the play is when Andrews discusses relationships, and his very real concern about whether a potential love interest will be interested in him as a person, and not simply ‘into’ his disability (i.e. getting stuck with a partner who is acting out a hero complex via Andrews’s eyesight challenges). This was a revealing moment about his fears of intimacy, and an acknowledgement of his concerns about social perceptions of disability. This show is both a discussion about these complicated topics, as well as a way for the author to come to terms with his situation . . . how to deal with life as a partially sighted person, and addressing his own fears for the future.

The experience of seeing this play and writing this review have made me think more about the assumptions we make about people, and the value of ensuring that others have everything they need in life.

Andrews draws on the common childhood sensation of feeling left out. On stage, he begins the routine team selection process, hinting at that embarrassing experience we all feared—being picked last. He then distributes wiffle balls to audience members and invites the audience to tell him when to swing the bat. Keep in mind—Andrews is blindfolded for the majority of the play. What could be a more apt demonstration of unfair humiliation, loss, and exclusion than poor physical coordination caused by a disability? Even those of us without physical handicaps can relate to the awful gym experience, so it was an effective mechanism to reach audience members.

As a play, it felt like a amalgamation of life experiences and scenes across many years, almost like small vignettes organized along the line of a single common thread. As a one-man performer, Andrews works hard to keep the rhythms and the narrative flowing, and there’s a good contrast between the potentially heavy (i.e. encroaching genetic blindness) and the lighthearted (wearing a traffic cone on one’s head).

CONES is a meditative journey with no conclusive outcome, though my own interpretation is that it is meant to be a sort of coming-out party for Andrews, a way to get his sight-related fears and thoughts into the open. Having spotted Andrews around the city, I never knew he had any kind of impairment, and I can easily imagine the conflicts one would experience when deciding to share or hide a personal ailment. I adore the idea of confronting a personal challenge with such boldness and ‘cant-take-it-back’ publicity. Own your challenges, instead of letting them own you. Read the full review >>. [The Rotunda, 4014 Walnut Street] June 19-23; themediums.org.