What’s a neurotic Jewish-atheist psychotherapist to do when her first three patients on her first day in private practice all consider themselves to be Jesus Christ? Her plan: Put them all in a room together and let them sort out their delusions, their goal: get the doctor to accept Jesus Christ as her Lord and Savior, oh, and convince her they are the real thing, at least as soon as they sort out which of them really is the real thing. 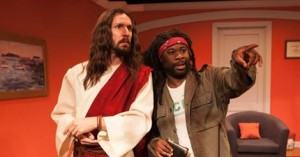 That’s the premise of Seth Rozin’s new play THE THREE CHRISTS OF MANHATTAN, which is closing out InterAct Theatre’s long run at the Adrienne on Sansom Street. Directed by Rozin and Kittson O’Neill, the play is fast paced and fun, and the actors have fun with their various Jesi, the decided upon plural for more than one Jesus.

Rozin, Artistic Director and co-founder of Interact Theatre Company, sets his play in the New York office of Dr. Paula Posner (Leah Walton), on her first day in private practice. Her office is beleaguered by cooing doves and an upstairs wrestling studio—a convenient way to explain away some of the noises coming from the improv program one floor above—as she shvitzes and complains to her own therapist, Dr. Krugman (Tom Helmer), a disembodied voice on a cell phone.

The other question raised by the play: if Christ were to come back today, what form would he take?
Jesus One (Dan Hodge) appears as the Jesus we know from pictures—white robe with red shawl, long hair, sandals. He paraphrases scripture and offers salvation and eternal peace, and lonely Dr. Posner finds herself drawn to him, “apart from the whole delusion thing.” He can’t seem to remember much about the first thirty years of his life, but he has come back to Judea to offer salvation and eternal peace.

Jesus Two (Akeem Davis) has come because his girlfriend tells him he has anger issues. The question of Jesus and a girlfriend aside, Two is a Marxist who sides with the 99 per cent and wants to overthrow the corporations. He knows he’s in New York, and he has a tendency to exclaim “Jesus Christ” whenever he is frustrated.
Jesus Three (Judith Lightfoot Clark) is a successful venture capitalist, her company is JC Plenty, and she has a Golden retriever named Luke who is very faithful. She describes herself as Jesus 2.0, clean-shaven, with an app for making babies, and she believes everyone can become rich.
As the Jesi debate their various positions, offering salvation, justice, or prosperity, Posner tries to convince them they are merely suffering a psychotic break, even as she doubts her own sanity.

Unfortunately, what begins as fun and interesting reworkings of the ways in which religion has become distorted to justify all sorts of positions in today’s world, eventually devolves into confusing arguments over what Christ really would represent today. And while the ending makes us sit up and take notice, I still left the theater wondering what Rozin was really trying to say.

THE THREE CHRISTS OF MANHATTAN, InterAct Theatre Company at the Adrienne, 2030 Sansom St. between 20th and 21st Streets, May 29-June 21, 2015, http://www.interacttheatre.org.