Excerpted from NealsPaper by kind permission. 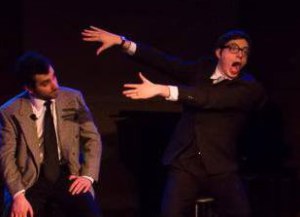 The young talent the school is grooming stands out in the Temple Theater production of Stephen Sondheim and George Furth’s MERRILY WE ROLL ALONG. You hear the brittle and beautiful in Sondheim’s lyrics.

MERRILY WE ROLL ALONG the musical of which is taken from a play by George S. Kaufman and Moss Hart, runs backwards in time. It begins at a 1976 party to celebrate Franklin Shepard’s latest hit film and ends in 1957 when Franklin, Charlie, and Mary, meet in a New York rooftop and vow to become great artists.

Michael Kiliany, playing Charlie, did a fine manic job on his big number, “Franklin Shepard, Inc.” and crooned sweetly while singing “Good Thing Going,” mentioned in Furth’s script as the Frank Sinatra hit it actually became. Allison Boyle, as Mary, the piercingly cynical member of a trio, finds the right tone for declaration of life not being so rosy, “Now You Know.” Alison Weisberg, as Beth, wrings the emotion from “Not a Day Goes By” and is, at times by far, the most recognizable character from real life you’ll see on the Randall Theater stage.

But except for Weisberg, these leads, and their castmates in the ensemble, often fall victim to an amateurish overplaying of MERRILY WE ROLL ALONG by director Brandon McShaffrey. Furth’s script calls for the assemblage to be having a good, and somewhat drunken, time, but McShaffrey goes overboard. Everyone laughs at his own bon mot with a big guffaw, a slap on somebody’s back, or a limp wrist taking flight. In a more controlled production, this might be a stylistic, or even a comic effect. In this production it only reinforces that these young actors were not trained to know  the characters they’re playing are. .

Characters in plays are supposed to be as much a possible like real people. Directors can opt for “over the top”, but what McShaffrey has his cast do is just posing. His partygoers are an adolescent’s view of what the smart set looks, sounds, and moves like. They remind one of an entire group of teenagers doing hammy Bette Davis or Katharine Hepburn imitations. Cary Grant, unparodied, would have been a more fitting model for how a person would behave at a swank party.

The cast executed all they were directed to do well. Few conquered the excesses, and some fell into their director’s traps headlong, but most went with the flow and did as they were told, a stance that paid off in the choreography, which was lively and, at times, interesting.

Bryan DeSilva and an unlisted cohort do well in making Sondheim’s score zing along on two pianos. Michael Long gives McShaffrey’s production some texture with videos of Manhattan, L.A. and other places germane to Franklin Shepard’s story. With the few exceptions noted, Marie Ann Chiment showed the wit and style the rest of McShaffrey’s production missed with her never-ending combinations of black-and-white ensembles. Read the full review >> [Randall Theater, 2020 13th Street] March 13-22, 2015; temple.edu/theater.