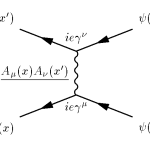 Judging by appearances and intermission chatter there seemed to be a bunch of intellectuals in the audience for the return engagement of Peter Parnell ‘s QED, a winner from Lantern Theater Company’s 2006/07 season.  But you don’t have to be an egghead to enjoy this play. It’s a great show for non-physicists, a category that includes a whole lot of us.

Richard Feynman (1918-1988), a world class scientist, didn’t guard the mysteries of science to make it more impenetrable. Au contraire. He made the basics accessible, relating concepts to nature and daily life. “Everything is interesting if you just look at it closely.”

Playwright Parnell’s translation of the essence of Feynman into a piece of theater pulls together disparate parts to show as many facets of his life and outgoing personality as will fit into an hour and 45 minutes.  Parnell did a good job with this near monologue,researching sources—lifting from some, and cleverly integrating a catalog of activities into one night, creating an intersection where things converge in a dramatic way.

The show opens with a brilliant musical flourish.  A tall blackboard backdrop filled with equations and diagrams rises behind the set of a quirky yet academic looking office, where Peter DeLaurier as Feynman assembles a talk, “What We Know.”  He tapes the lecture, off and on, providing a framework for all the goings-on, which include musings about past events like his work with the A-Bomb. There’s information on Tuva, where people talk like Yoda, “Gladness full am I,” but in Russian. A student visits, and he plays his drum.  He leaves for awhile (Intermission) to appear in a university production of South Pacific. He fields many late night phone calls on various topics that range across his career, talking to his friend Ralph Leighton, his wife, and a member of the Rogers Commission (investigating the Challenger disaster).  Some calls are from doctors, and he deals with absolutely dire news in a characteristically upbeat way.

One slightly awkward aspect of the monologue form is that the Feynman character has to fill us in on his Nobel Prize, which the actual Feynman might have been loath to do. He disliked awards.  Another thing, while the playwright deftly treats the way Feynman handles his own grave condition, the way he has him deal with poignant memories of his first wife’s death borders on shameless sentimentality.  To the actor’s credit, though, and that of director M. Craig Getting, DeLaurier plays the purple passage for all it’s worth.

Peter DeLaurier performs throughout with geniality and a contagious energy, managing to convey a convincing spontaneity despite his history with this role. In the small accompanying student role, Clare Mahoney, fresh and lively, performs an exaggerated samba-like dance, although no choreographer is listed in the program.

Along with references to quantum mechanics, DeLaurier’s Feynman dispenses words of wisdom and philosophy—full of heart and always questioning. Richard Feynman was not only entertaining, he was as fine a man and a scientist as you’re likely to find.  A great subject for a play, DeLaurier brings him to life with passion and verve. It’s inspirational. [St. Stephen’s Theater, 10th and Ludlow streets] November 20- December 14; lanterntheater.org.