Who do you think of when you think of Watson? Sherlock Holmes’ faithful companion and publicist, the computer (named for Thomas J. Watson, Sr., who ran IBM from 1914-1956) that beat Jeopardy’s biggest winners in 2011, or Alexander Graham Bell’s assistant, the man who received the first ever phone call.

Whichever it is, they are all present, along with a modern robot and a charming young man both also named Watson, in Madeleine George’s play, THE (CURIOUS CASE OF THE) WATSON INTELLIGENCE, that just finished its run at the Azuka Theatre. In a time-bending script that requires each of the actors to play multiple roles across the last century or so, Watson, played in all his guises by Griffin Stanton-Ameisen, is the force that ties them all together.

When Edison, from a darkened doorway, repeatedly calls out “Watson, come here, I want to see you”—or was it, as that Watson insisted, “Watson, come here, I want you”?—is he, perhaps, expressing a need we all have to have someone, something, at our beck and call. Eliza (Corinna Burns), a modern entrepreneur, who has left her husband and her job and is starting her own company called Digital Fist, has created her own Watson, a charming barefoot robot who rarely looks at her but says just what she wants him to. Phrases like, “I just want to give you what you want.” And who wouldn’t want to hear that?

When her ex, Frank Merrick (David Bardeen), a dismantle-the-government politician who is running for the position of City Auditor, sends a Dweeb Team computer technician, also named Watson, to spy on her, she is all too ready to fall into bed and perhaps into love. Now she has two men in her life who want to give her what she wants. But she’s not really sure what that is.

Meanwhile, in the Victorian era, another Eliza goes to consult Sherlock Holmes about her husband’s odd behavior and the strange marks that have been appearing on her hands. Instead she encounters the ever present John Watson and he decides to step in for the absent Holmes, even though he can’t seem to make even one intelligent guess as to her circumstances. He is, however, there to help. He wants to give her what she wants, while her husband, a nineteenth century Merrick only wants to destroy her. 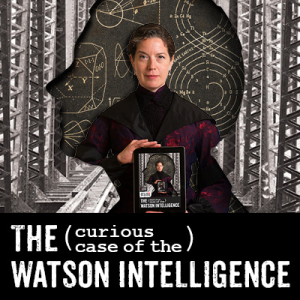 All human relationships of the romantic sort are fraught with peril, it seems, and that is why we need a Watson, an ever faithful companion, a robotic roommate, to help us over the rough spots. Modern-day Eliza prefers her manufactured confidant to a real-life, flesh and blood relationship, but once he is complete, he becomes too perfect, and she must break up with him too. We want connection, it seems, but not attachment.

The play has moments of intrigue and connection, but at times gets talky and hard to follow. The notion of having actors play multiple characters seems to be in vogue right now, and the actors do well with acquiring English accents and changing postures to indicate class and age and emotion. Stanton-Amiesen has the most switches, from immobile robot, to disarming dweeb spy, to Victorian sidekick—although not quite convincing as an object of desire. Burns portrays Eliza’s emotional state well, but she could use a little more of the drive one might expect from a techie driven to create a start-up. And Bardeen is effective as he switches between a single-minded politician and abusive husband, though a little modulation of energy might have created a more nuanced performance. The set, designed by Dirk Durossette, switches between bedroom, lab, office, Holme’s sitting room, and wherever else it has to be with minimal fuss. The problem lies mainly in the script, which tries a bit too hard to be clever and make a point about connection and communication and today’s internet world without totally succeeding.

At ibm.com, Watson the computer is described as “a cognitive computing system” that “is a natural extension of what humans can do at their best.” That may be, but if watching robots instead of actors is what lies ahead, the future of theater may be in jeopardy (pun intended). [Off-Broad Street Theater, 1636 Sansom Street] November 5-23, 2014; azukatheatre.org.