With a storyline full of all the classic elements of an elusive, cunning, and intensely intriguing spy thriller, CIPHERS also displays an ultra-modern set and unflinchingly poised cast. When a meager English girl Justine (Isa St. Clair) who is terribly bored with her washed-out marketing career decides to take a job with the British Security Services, her life does not seem to change in any drastic way. Justine listens to tape recordings, deciphers codes, and tends to usual office duties. It is not until her superior Sunita (Felicia Leicht) challenges Justine to move up and take on more serious roles as a spy that Justine’s world begins to rattle.

As she takes on delicately complex work assignments, Justine’s love life is stirred by a sexy, flirtatious, up-and-coming artist named Kai (J. Paul Nicholas) who is a friend of Justine’s wild sister Kerry (also played by Isa St. Clair). Kai’s overbearing, obnoxiously brazen wife Anoushka (also played by Felicia Leicht) seems too caught up in herself to realize that Kai and Justine take casual conversations to the next level.

Justine is introduced to yet another character, a powerful Russian man named Anton (John Morrison), also a boss turned false confidant turned unsuspecting lover. Each actor plays two characters; St. Clair dazzles audiences not only in English, but also in cheeky Japanese and Russian dialogue. The plot thickens after every short, intense scene, as a tragic murder unfolds.

When everyone has a motive and no one really knows what is happening behind veils of secrecy and furtive disguises, it seems appropriate to ask the question: How often do seemingly easy decisions turn into fatal mistakes? Are people to blame for their shortcomings leading them astray, or is circumstance an ever-revolving game of happenstance? CIPHERS will keeps you guessing and leave the mystery for you to solve.[Off-Broad Street Theatre in the First Baptist Church, 1636 Sansom Street] October 8-26, 2014; Inisnuatheatre.org.

Use code PHINDIE3 for discounted tickets to CIPHERS.

Read another review of CIPHERS by Phindie writer Jessica Foley. 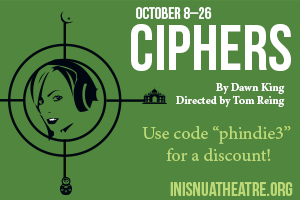