When Charlie Kaufman sat down to adapt Susan Orlean’s The Orchid Thief, he found he was unable to do so in any conventional sense. Be it writer’s block or a curious case of imaginative lightning striking, the resulting film, Adaptation., was much less a cinematic retelling of a novel than it was a brilliant dissection of the anxiety that seems to come packaged with creativity. It even netted his imaginary brother Donald an Oscar nomination, as well as a win for Chris Cooper, the formerly titular cutpurse anthophile. In adapting Iain Reid’s I’m Thinking of Ending Things, Kaufman has once again forsaken the notion of a straight adaptation. While his take on the material is bizarre in some very big ways, it’s largely true to the source, at least in a plot sense. The true feat being that given the surreal nature of much of the novel, the film is impossibly cinematic.

Having crammed the (very good) novel into my brain in the days leading up to the film, I do wonder how much of my enjoyment I can attribute to studying Kaufman’s writing ability, and if, for those not familiar with the slightly more grounded novel, the film may be too cryptic at an entry-level. Then again, if you’re signing up to watch a film from the guy who made Synecdoche, New York, then maybe “intensely peculiar“ is totally your bag. It’s definitely mine.

Both the film and the novel tell a basic story. Well, basic on a surface level. The audience surrogate comes in the form of a young woman (Jessie Buckley) and her new-ish boyfriend (Jesse Plemons) visiting his parents for dinner. It will be her first time meeting his folks, so needless to say there’s some nervousness going around. As the couple drives through the snowy farmland, our protagonist ponders the long-term potential of her relationship. She is, as exhibited by the title, thinking of ending things. It’s early enough in the romance that any broken hearts won’t be fully shattered, but to make the break just after meeting her beau’s family feels rather cruel. The film follows their long drive to dinner, the dinner itself, and the drive home. To say much more about the plot would be, uh, difficult. Then again, I couldn’t possibly spoil this bonkers flick if I tried.

Whereas the novel leaves the express surrealism for its later pages, it’s pretty clear right off the bat that Kaufman’s film is not fully grounded in reality. Characters change outfits impossibly, age and de-age drastically from moment to moment, and at some points even take on completely foreign personality traits, if only for a few minutes. Cryptic cutaways to a lonely high school janitor defy meaning until much later in the film, and even when it’s made clear, it’s not crystal. That said, kudos to Kaufman for making a movie that trusts the audience to grapple with it rather than just explaining things outright (while the novel is much clearer on where the story ends, it’s also less fun to when it gets there). A common difficulty in adapting a story that is told primarily through an internal monologue is figuring out a way to express such things visually and, as the rules comically espoused in Adaptation. state, to do so without relying on narration. Kaufman clears this hurdle by replacing much (not all) of the inner monologue with conversation. Instead of having our protagonist silently observe that strange things happening around her, we instead get to notice these idiosyncrasies ourselves, all the while pondering over the thematically loaded, and frequently hilarious chatter. 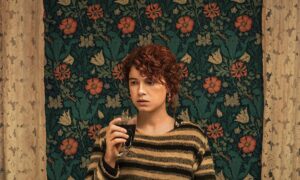 While it’s entirely possible that my love for this movie is mostly because it’s a rock-and-roll act of writing, I think it will provide worthy food for thought for even the most perplexed viewer.

Jesse Buckley does incredible work from moment one, maintaining an air of “everything is fine, I’m still in control” even as her environment spins well beyond normalcy. Her many-named character represents the audience during this experience, but as her true nature starts to show itself, the actress must subtly dip in and out of incongruent emotional states. At one point, apropos of a blink-and-you’ll-miss-it motivator, she goes full Pauline Kael. As a film nerd, the moment is hilarious, but it also may be the most terrifying moment of the movie. Yes, to a degree, this could be considered a horror movie, insofar as a Charlie Kaufman movie could ever be considered horror. It is certainly aware of the genre-ish nature of its imagery, and few can watch Toni Collette at a dinner table without being reminded of Hereditary. As far as Kaufman scripts go, I personally find Being John Malkovich to be much more horrifying.

Jesse Plemons, who has now worked with … checks list … EVERY FILMMAKER EVER, brings his character Jake to life without dipping into histrionics. He’s a pretty basic dude as presented. Smart, timid, protective of/embarrassed by his parents. He’s exactly the type of middle of the road dude that a new girlfriend would perhaps feel like she’s settling for on the low-bar basis that he isn’t awful. Granted, I can only speak about either of these lead characters as they are presented at the outset of the story. As the film develops and we learn more about them and their motivations and intentions, it’s up to the performers to find a new truth while still holding on to the allegiances of the audience. Both Buckley and Plemons do this incredibly well. If Buckley carries the first half performance-wise, and she does, Plemons gets to bring home the show-stopping finale. It’s fucking wild.

Do I even need to comment on how good Toni Collette and David Thewlis are as Jake’s bizarre parents? Cuz they are both exceptional.

Even if I prefer to see his material made by other filmmakers, there’s no denying that Kaufman has grown as a director. His previous live-action effort, Synecdoche, New York, stumbles into blandness at points. While there is indeed some thoughtful direction on display, it occasionally falls victim to the curse of the first time filmmaker. Such is not the case with I’m Thinking of Ending Things. Kaufman makes a multi-setting story feel like a single, claustrophobic location, all the while populating the top section of many shots with negative space. We’re either right up in the characters’ faces, or across the room from them, while they simmer in the lower portion of our visual real estate. The backdrops are incredibly textured, until they aren’t, at which point they become illusory. Add to that Jay Wadley’s alternately cutesy and haunting score, and you get a film that’s a compelling, thoroughly satisfying watch, that doesn’t let a minute of its sizable runtime leave you feeling even remotely comfortable (this is good).

I’m Thinking of Ending Things is a really good novel that has been made into a really great movie. Both Reid and Kaufman have maximized the use of their respective mediums to give us the best possible version of the story within each. Reid’s novel is a perfect vessel for Kaufman, well-suited to his unique ability to appeal to the humanity of the viewer without letting them off the hook for the dubious behaviors and complicities that come with human nature, and how, when removed from form and propriety, we are illogical, erratic, funny little creatures, destined to ping off one another like pinballs until we’re too chipped to roll.