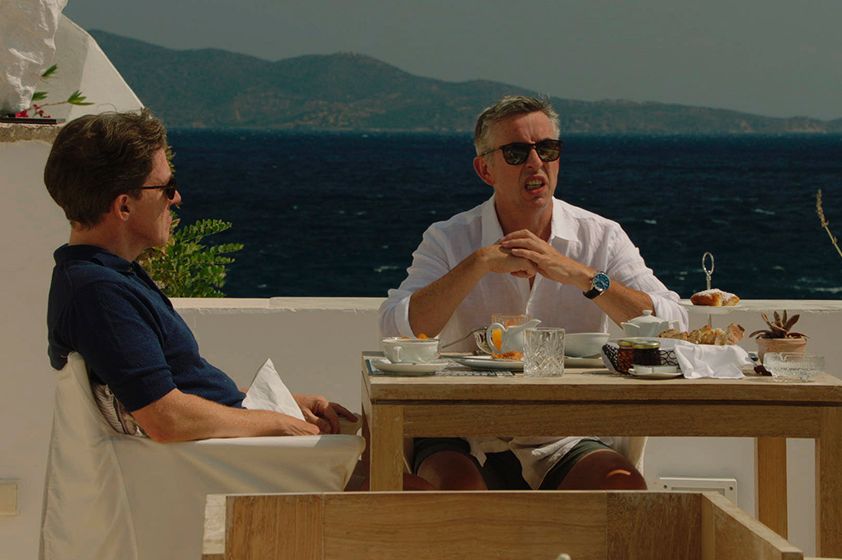 Conventional franchise wisdom is that you should stop at a trilogy if you can, invoking fourth entries only for further adventures of Jason Voorhees and a handful of other small exceptions, and in the case of The Trip to Greece, this wisdom holds firm. While not an unwelcome addition to a now decade-long odyssey of travelers Rob Brydon and Steve Coogan, this final entry feels a bit flatter than its predecessors; a bit perfunctory.

Beginning with the titular trip already in progress, our duo of impressionists are now on a journey through Greece, tracing the path of The Odyssey for some sort of vague writing project while stopping off regularly to dine at high class restaurants amidst beautiful vistas. Steve Coogan, winner of seven BAFTAs (a fact that he will not let you forget) is as cocky as ever, while cohort Rob Brydon, a man of more meager successes, plays as Coogan’s more down to earth foil. The age is showing on both of their faces, and gray hairs have taken up most of their cranial real estate.

Such is the thematic concern of the film. With both men reaching upper middle age, they are each increasingly interested in legacy, opportunity, and the meaning of life at large. With these heightened versions of Coogan and Brydon having taken slightly different versions of the same path (Coogan a playboy with mass pop culture appeal; Brydon as a contented family man whose job happens to be in showbiz), they’ve both reached an age where they must look back on their privileged lives and try to figure out if they indeed “did it right.” A sly trick of the franchise has been the way that story concerns are handled on the periphery. Be it a phone call to an agent, or an interaction with a family member or, in the case of the previous film, a dalliance with a potentially dangerous foreign element, these quick asides to the revelry do an uncommon amount of work to justify the Trip movies as complete narratives, because really, these excursions are just an excuse to get two beloved goofballs riffing over a plate of steak tartare.

This, however, is where The Trip to Greece stumbles. While the dramatic/thematic work hits hard, doing so in unexpectedly heavy ways, the humor mostly isn’t there. Yes, our two leads bicker about the disparity in their fame, typically while in a long-winded impression of Mick Jagger, but the naturalism of the previous entries is gone. Whereas until now the humor seemed to flow from organic conversations or legitimate scholarly inquisitions into the history of the travel locales, here it just feels like two professional jokesters turning their craft on and off at the beginning and end of a work day. Don’t get me wrong, there’s little these two chuckleheads could do together that wouldn’t elicit at least some laughter, but the spontaneity behind their premises is lost. The duo rarely falls naturally into a bit, instead just launching into it apropos of nothing. Once the contrived premises get going and our heroes fall into a groove, the laughs come a bit easier. Still, it’s hard not to feel like there’s little left in the gas tank.

There are a few clever meta stabs that work better in concept than execution, namely in the deconstruction of impressions right at the outset of the film. Was Coogan’s turn as Stan Laurel in Stan & Ollie acting, or was it just a glorified impression? This line of thought comically jabs at Coogan’s ego while also opening a door of inquiry into the draw of the The Trip franchise on the whole. It’s a door that opens, but is never walked through. Same goes for a short detour to a refugee housing facility that looks a lot like a prison. For a second it seems that there might be some scathing commentary on the real world woes involving refugees, but before that can happen we’re off to a new location while Rob waxes philosophical on Barry Gibb’s contribution to the Grease soundtrack and the homophonic connection between “Grease” and “Greece” as well as “homophonic” and “homophobic.”

It sounds like I’m coming down hard on a movie that, all things considered, is a decent way to spend an afternoon. It’s not a bad film at all, but it is a reminder of why gourmet food is served in smaller portions: it’s possible to have too much of a good thing. And when you dip into the territory of excess, a lot of what made the meal special ends up feeling diluted.

I should highlight that the food photography in this entry is some of the best in the series. You can practically smell it. One particular meal made me feel a certain way about the Kraft Mac and Cheese Dinner I was eating at the time it appeared onscreen.

Fans of the series will certainly go home satisfied, but to enjoy it one would do well to be aware that the dramatic beats work much better than the comedy this time around. While the melancholy dismount (I’m assuming this is the final trip) is true to the series as well as the general existential mood of our times, it doesn’t make up for the fact that the gags are noticeably more contrived. Still, the duo finds laughs once their painful struggle for a premise opens up to freewheeling improv. There are two moments where Coogan can barely speak since he’s laughing so hard, and it’s here we can see shades of what should have been.

And really, not a single Michael Caine impression? For shame. For a series that coasts upon a distinct formula, it’s hard not to feel a bit slighted by this absence.

Available for streaming on May 22